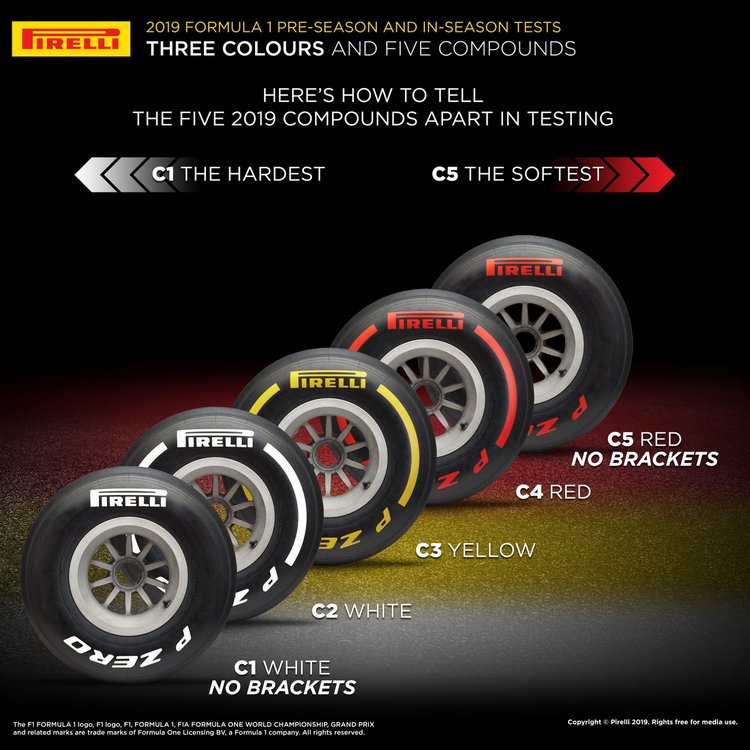 In an effort to ‘simplify’ the identifying of tyre compounds for Formula 1 fans, the powers that be mandated three colours would be used at races in 2019 with all five compounds available covered by the red, yellow and white sidewall bands.

It would be fair to say that fans understood last year’s concept of compound identification if not agreeing with the plethora of rubber choices but it was clear: Purple was Hypersoft, Red Supersoft, Yellow Soft, White Medium, Blue Hard.

This season, depending on the race, Red might be Hypersoft or Supersoft, Yellow Supersoft or Soft, White Medium or Hard, which sets the stage for a commentators ‘nightmare’ as they try to explain what compound is under what colour…

Clearly, the ‘if it ain’t broke don’t fix it’ law did not apply here.

With preseason testing starting on 18 February, Pirelli have explained how they will tweak the tyre markings so that the three colours will identify the five compounds available to teams during the two weeks in Barcelona’

All five slick P Zero compounds will be seen in testing this year, but only three colours. To help distinguish them, the hardest and softest tyres available won’t carry stripes on the sidewalls.

Mario Isola, Head of F1 and Car Racing: “Normally we will only see three colours at every race, so we’re only using three colours at the tests as well. But we want to make sure that people can tell the compounds apart. As a result, the very hardest and softest tyres won’t be marked with stripes: only the colours will vary. This will be the case for the in-season tests as well.”