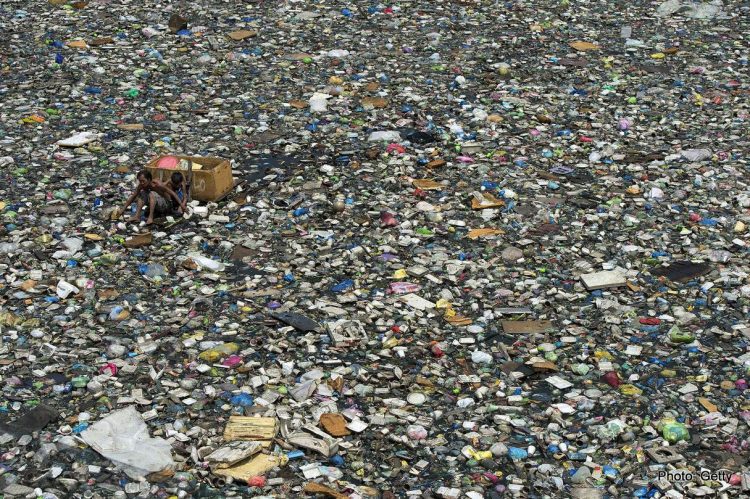 Caption: A father and son on a makeshift boat made from styrofoam paddle through a garbage-filled river as they collect plastic bottles that they can sell in junkshops in Manila. The father and son team earn some three US dollars a day retrieving recyclables from the river.

You are warned: This is a rant! We took the adding of Vietnam to the Formula 1 calendar on the chin because that was the politically correct thing to do, but now talk about a Philippines Grand Prix is just one folly too few! Give me a break!

The Independent broke the news on Friday: “F1 filed the trademark application with the Intellectual Property Office of the Philippines in seven categories including sports events, broadcasting, clothing and printed products. It was made on 7 January along with a trademark application for ‘Manila Grand Prix’ suggesting that the city could be home to the race if it gets the green light.”

As much as I love the Philippines (beautiful place) and know many people from the island nation thanks to my days in Dubai. Great people with an awesome sense of humour and not afraid of hard graft.

Ask any one of them if the Philippines needs a Grand Prix and the answer would be no, normal people would not condone spending hundreds of millions of state dollars to fund recklessness.

In May 2018, World Bank reported: “In 2015, some 22-million Filipinos (more than one-fifth of the population) still live below the national poverty line.”

“Most poor Filipinos have low levels of education and live in large households headed by individuals who are self-employed or work in agriculture as labourers or smallholder producers. The poorest households are those dependent on agriculture as their main source of income and most of them live in the countryside, in areas prone to disasters or in the conflict-affected areas of Mindanao.”

“Inequitable investment in human capital and insufficient well-paying job opportunities trap the poor in poverty across generations. High concentrations of wealth constrain equal opportunities and access to services, which are necessary for inclusive growth. Natural disasters disproportionately and repeatedly batter the poorest regions of the country, miring them in higher levels of poverty.”

With this all in mind, how can the Formula 1 world even countenance such a ‘destination’ for a race, surely conscience has to prevail over greed sheerly for humanitarian reasons.

That argument about how much F1 brings to a community where it is hosted is generally balderdash relative to what is spent to host a Grand Prix, maybe exceptions are the likes of Monaco, Silverstone, Monza and Spa. The rest pay hefty fees and the so-called “spillover effect” for business is pure thumbsuckery – that is not exclusive to F1 all big events in any town have spillover effects but not all cost $150-million to host.”

Also hogwash is that F1 at new untapped venues inspires new generations of motorsport wannabes and boosts local racing, as if every little Vietnamese boy and his family are going to start karting!

Ask Indian motorsport fans what hosting the Grand Prix did for the sport in their country, the answer is: very little if anything. Ditto South Korea.

Both are countries in which one would have expected Formula 1 to succeed, both nations on the rise with a massively upwardly mobile and trendy youth market, coupled to a high level of education and thus an obvious target for F1. But the race failed.

Instead of trying the far easier and cheaper task to revive the half jobs done in India, South Korea, Turkey and Malaysia, or develop races at heritage venues – like Kyalami, Hockenheim, Wakins Glen, Brands Hatch, Imola, Zandvoort, Long Beach, Dijon etc – they decide to take the sport to Vietnam in 2020 and that’s confirmed.

Granted Vietnam is a rapidly recovering country but, facts are facts, and there are dire problems that are by very, very far more important than a Formula 1 race or any major sporting event that costs so much to ordinary hard-working tax-payers.

Throw into that how the building, running and dismantling of the track will seriously inconvenience the city of 7.5 million and it’s just a very bad idea which prompts some obvious questions to F1 Chairman and Chief Executive Chase Carey, City of Hanoi Chirman Nguyen Duc Chung and Nguyen Viet Quang, Vingroup Vice Chairman and CEO Nguyen Viet Quang:

Whoever made the final call and inked the deal for the Hanoi Grand Prix – probably Chase and a senior Hanoi government official – are ignorant or stupid or both, and that their advisors (yes I mean Ross Brawn) are buying into is alarming, he should know better, and makes me seriously question for the first time what these guys are doing.

Last year the World Bank painted a positive picture of Vietnam as a fast recovering country, reconstructing itself remarkably from the brutality of decades of war, but also highlighted: “Let’s not make any mistake – there are still about 9-million (about 10%) people living in extreme poverty and no one should be left behind.”

“Thus, even as the majority of the population’s concerns are shifting to improving their quality of life more broadly – such as having access to high-quality services and more comfortable living conditions – we should be mindful to provide the much-needed support and implement targeted interventions to give hope and create opportunities for those lagging behind, and currently living in poverty, so that they too, can benefit from the broad improvements in the society.”

So, according to Formula 1 and their partners in this [sick] venture, part of the solution, to bring running water and basic meals to 9-million people, is to burn half-billion dollars so the country can host a fucking car race!

This is when Lewis has to get humanitarian like he means it, or philanthropist Toto put his foot down – how can they countenance the Silver Arrows racing the streets of Hanoi, while VIP guests chomp exotic canapés, tipple bubbly and smoke cigars when around them 9-million people live below the third world poverty line?

You want to do good, take a roadshow to Manila, or Hanoi or wherever. Make it three or four times a year, televise live races in parks or outdoor areas where crowds can gather in F1 village-style. That promotes the sport to the people without costing governments a bundle. Do this for ten years and see then if they are ready for a race.

I, like most who read this site, bleed this sport and only want the best for it. Ultimately I am hoping I am the stupid guy here while Chase and his merry men have it right, but for the life of me no matter which way I look at it neither Hanoi or Manila need a Grand Prix, quite the opposite in fact!

What next? A second Chinese Grand Prix? Don’t get me started on that…