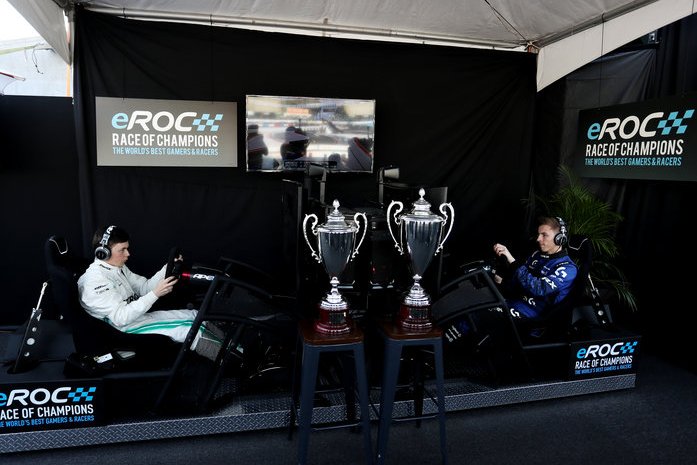 British simracer James Baldwin has won the eROC World Final, defeating fellow countryman Brendon Leigh in a timed shoot-out on the sim and in real-life cars on the ROC track at Mexico City’s Foro Sol.

Baldwin will now compete for Team Sim Racing All Stars alongside Italy’s Enzo Bonito (last year’s eROC Champion) in the ROC Nations Cup later today against some of the world’s greatest racing drivers. The two simracers will also go head-to-head for a place in the group stages of tomorrow’s individual Race Of Champions.

After last year’s eROC was a purely invitational event, this year the competition was opened up to anyone on the planet in a bid to find the overall ‘best of the best’. Many of the world’s finest gamers entered a six-week competition to win a ticket to Mexico before a 32-driver online shootout, won by G2 Esports Sim Racing’s Sebastian Job.

The other simracers in action included Britain’s Brendon Leigh, the 2018 F1 Esports World Champion for Mercedes-AMG Petronas Esports, who was the runner-up in last year’s eROC World Final. Also in the competition was Germany’s Nils Naujoks, who was offered a wild card based both on the strength of his performance in the eROC World Qualifying and his impressive career in gaming over the last 15 years – including five ESL Pro Series titles.

Baldwin, the 2018 Renault eSports Champion and Veloce eSports racer, had earlier won December’s eROC Invitational, beating off 16 invited champions from across all forms of Sim Racing.

The eROC World Final action took place both in the virtual world of Assetto Corsa and in a mix of real-life ROC machinery on the Foro Sol ROC track itself – after ROC Academy training by stunt legend Terry Grant. And it all happened under the watchful gaze of Grant himself plus two of the greatest drivers in history: Formula 1 legend David Coulthard and ‘Mr Le Mans’ Tom Kristensen.

Despite limited experience in real racing cars, part of the challenge involved setting a lap with the champion drivers judging the simracers on a range of criteria including track awareness and positioning, car control and outright pace. The gamers were more at home in the other part of the challenge, which involved simracing on the Assetto Corsa version of the ROC Mexico track.

After the scores for both sections were totted up, Baldwin and Leigh progressed to the final. The action took place both in real-life KTM X-Bows on the Foro Sol track and on the sims, but in the end Baldwin prevailed.

Baldwin said: “It feels unbelievable. I’m still trying to process it. This morning I knew the assessment didn’t go too well yesterday, so I knew I had to make it up on the sim and in the real-life car on the track. In the end the sim went really well this morning, it just went in my mind how I thought it would. I had a positive mental attitude and it paid off. As for this afternoon, I don’t know what to expect, but I’m so excited. Let’s get on with it!”
Race Of Champions

Last year’s eROC Champion Enzo Bonito had some words of advice for his new team-mate on Team Sim Racing All Stars ahead of the ROC Nations Cup.

Bonito said: “The main thing is to remember to enjoy it because a chance like this doesn’t come along very often. So the eROC World Final is great news for everyone who comes from simracing. Last year was one of the first experiences I’ve had in a proper racing car and I had no idea what to expect. At first I was completely lost, but Terry Grant gave us exactly the tips we need, helping us understand everything.

“With more time in the car you start getting the feeling, to the extent that at times it felt like driving a simulator. So I just did what I’d been doing at home… if anything the feeling was even better because the feedback doesn’t just come through your hands but your whole body. If James can take some tips from simracing and transfer it to the real racing this weekend, like I did last year, they’ll enjoy it and they’ll be fine!”

ROC President Fredrik Johnsson added: “Congratulations to James on winning the eROC World Final. It’s exciting to see how well the gamers have transferred their skills from the simulator to the real track – not least thanks to Terry Grant’s ROC Academy training – and today’s action shows how far they’ve all come.

“This was the second eROC World Final but it is still just the beginning. Last year’s inaugural event was purely invitational but this year we were determined to expand the search to find the ‘best of the best’ from all over the world. Now we aim to keep opening up eROC to an even wider audience. Whether you play on your mobile, iPad or anything else, the whole planet will have the chance to compete – and if you are good enough, you could find yourself racing at the Race Of Champions against some of the world’s best drivers in identical cars…”