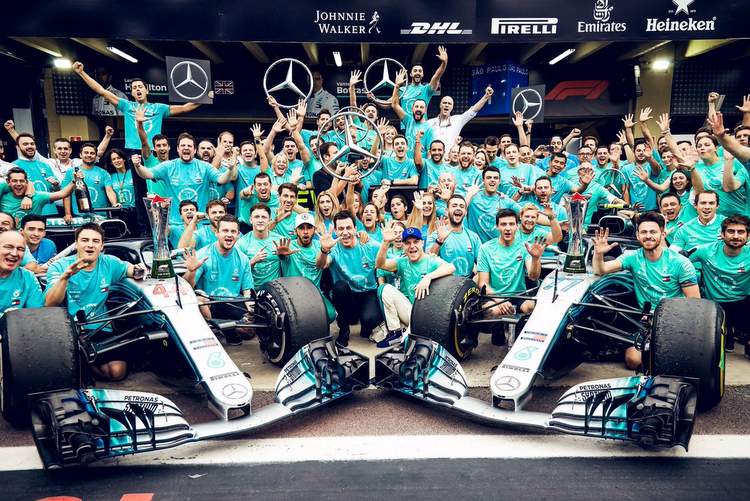 The Austrian revealed that Jean Todt, now president of the governing FIA but previously Michael Schumacher’s boss at Ferrari, had called after the Brazilian Grand Prix to congratulate him.

“He said ‘it is an honour to welcome you to the five times club’. Which is unbelievable to even hear that. I am speechless,” Wolff told reporters, even if he was not lost for words for long.

While Ferrari won six team titles from 1999 to 2004, they and Mercedes are the only ones to have won five successive ‘doubles’ — the drivers’ and constructors titles together.

Next season will see Mercedes attempt to break new boundaries, with Sunday’s race winner Lewis Hamilton also chasing his sixth title to move closer to Schumacher’s seven, but there is plenty to celebrate before then.

Wolff said 2018 had been the toughest of them all, with Ferrari mounting a major challenge, and also the most satisfying, “It was the most difficult and that’s why the relief now is the most I’ve ever felt in the team.”

“We had such a horrible race today with the perfect end result, with Lewis winning and us winning the constructors’ championship.”

Wolff said Hamilton’s engine had been close to failure, and the engineers had to reduce the power remotely and cool the temperatures.

Every lap to the chequered flag was filled with tension before, finally, “everything broke loose”.

The team’s pit lane celebrations were so wild that one of the barriers collapsed, bringing an ecstatic Hamilton back to earth with a bump.

Since the start of the V6 turbo hybrid era in 2014, Mercedes have won every title and Hamilton 50 of the 99 races — a phenomenal return.

When Hamilton moved from McLaren in 2013 there were plenty of pundits predicting the Briton would regret it but now Mercedes, along with Ferrari, are the team every driver would love to race for.

The battle has ebbed and flowed this year, with Ferrari winning the first two races before Mercedes came back and were then overtaken again. For much of the season, Mercedes felt the Italians had the fastest car.

“That is why this championship feels best, because we had a hell of a fight on our hands throughout the season with Ferrari,” said Wolff.

“And being able to win a fifth consecutive championship is something we wouldn’t have dreamt of six years ago. In our wildest dreams that wouldn’t have come to mind. Equalling a Ferrari record that seemed unachievable is something I feel so grateful and fortunate.”

“I can remember before I joined Formula 1, those Ferrari years with Jean [Todt] at the helm and Michael and many others that contributed to the team’s success was something I really looked up to and admired,” added Wolff.