Glock: I was asked how much Mercedes and Lewis paid me 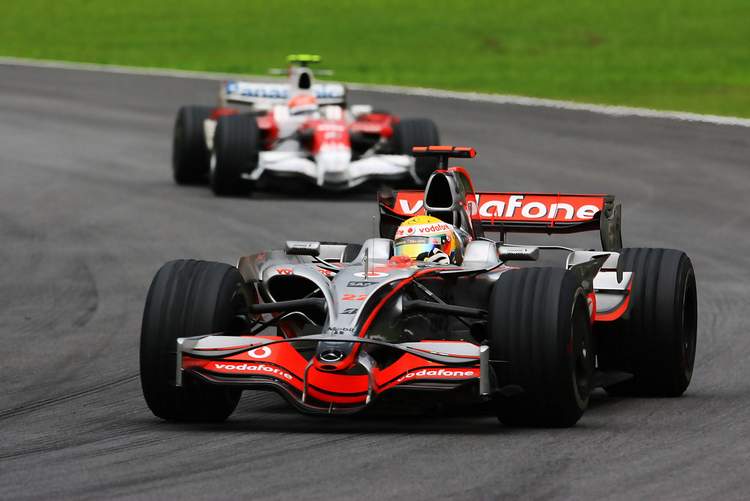 If there ever was a prize for the most dramatic final lap of a grand prix it would have to go to the one in 2008 when Lewis Hamilton pipped Felipe Massa to the championship by a point thanks to a last lap overtake on Timo Glock to do the business and break the heart of every Brazilian.

That day alone would make a script for an awesome Hollywood movie, had it not happened no one would believe it. We have heard of the pain of the Massa family, the unbridled joy of his father celebrating the ‘title’ only to realise that it was all a hoax his son had not triumphed.

The unabated delight of the McLaren camp on a night that triggered Hamilton’s journey to superstardom and five titles to date.

Immediately after the race, unfounded accusations of collusion between Glock and Hamilton emerged ridiculously suggesting the pair had some preconceived plan. Video evidence has since dispelled most conspiracy theories.

So who best to pour cold water on the whole affair than Glock?

The German recalled the episode in a recent interview with ESPN, “There were a couple of journalists who were very aggressive, especially from the Italian side, pointing fingers at me and saying I had done this on purpose and it must have been planned before the race: how much did Mercedes [McLaren’s engine supplier] and Lewis pay you.”

Timo: It’s helped people understand there was no tactic behind it and that it was just a battle to keep it on the race track

“It was a situation I never thought I would be in. I could not believe people actually followed this stupid thought that I had somehow planned this with Lewis before the race. How did we know the weather would turn out like this before the race?”

“We even had letters come in to my family, to my dad and mom’s house about how I had done this and how people should shoot me, I shouldn’t be in the sport anymore. I could not believe how bad people could be. It was pretty extreme.”

For Glock, it’s an old story that follows him around like Groundhog Day, “Every year, every November I get asked about it! I get less abuse now that someone at F1 put the video up on the internet — you can see how much I struggled on the last lap.”

“This calmed down the situation totally as I can just send people that now. I have no idea why it took them so long, but I also have no idea why I never thought to ask them to put the onboard online! But it’s helped people understand there was no tactic behind it and that it was just a battle to keep it on the race track.”

Hamilton won the championship by a single point that year and now arrives in Brazil, ten years since that dramatic weekend, a five times F1 world champion.