Vasseur: Leclerc is ready to drive for Ferrari 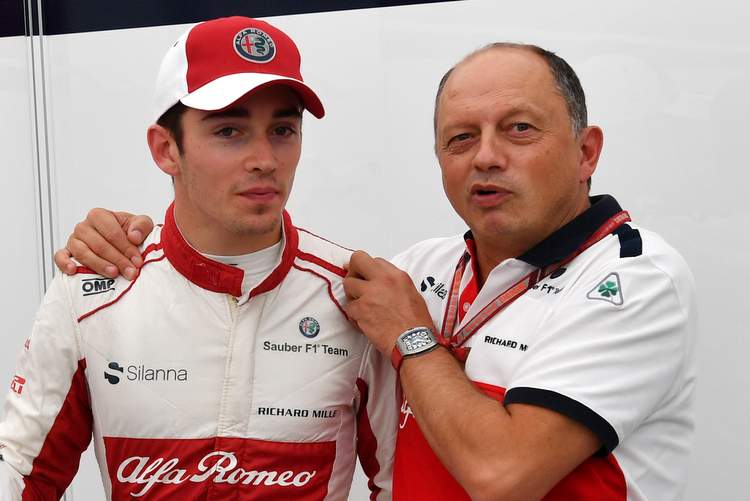 Frederic Vasseur has witnessed firsthand the rise of both Lewis Hamilton and Charles Leclerc in his role as Sauber chief as well as part owner of ART Grand Prix GP2/F2 team, although loathe to compare the two he does believe the rookie is ready to step up to Ferrari.

ART Grand Prix was created in 2005 as a collaborative project between Vasseur, chief of ASM Formule 3 and Nicolas Todt. It became the top team in the GP2 era with Nico Rosberg (2005) and Hamilton (2006) winning the title with the outfit. The Frenchman got to know both drivers well.

Now, overseeing the grooming of Leclerc for the past season, Vasseur said in an interview with Formula Passion, “I don’t want to compare Charles to a driver like Lewis.”

Of his time with Hamilton, Vasseur recalled, “Lewis made his debut over ten years ago with McLaren, at the time a title contender. This is a very different approach to what Charles has had with us.”

“At the time, [with Lewis] before the first race there were about twenty days of [F1] testing. When Leclerc started with us we were at the bottom of the grid. I think making his debut in a team like Sauber is easier, less pressure.”

Vasseur: Everything seems well prepared for him

“Obviously, without much testing, he struggled a bit in the first races but then he improved a lot, not only in managing tyres and fuel but also all the information on the wheel and that is a big step forward compared to the other categories,” he added.

Ferrari have decided to part ways with veteran stalwart Kimi Raikkonen, making way for the youth of Leclerc, bucking tradition by pairing an ‘unproven’ youngster with a four times F1 World Champion in the sport’s most iconic team.

The obvious question: Is Leclerc ready?

“Yes, he is. Will he surprise everyone? We cannot know that. First of all, it depends on the quality of the car he will have on in his hands. But the car is improving, he is improving and everything seems well prepared for him.”

Vasseur concluded by explaining the impact Leclerc made on the Swiss team in his rookie season with them, “He played a very important role to motivate the team. He and Ericsson have stimulated each other, improving step by step. The very fact that Charles grew so fast is also due to the fact that Marcus was his teammate.”