Allison: I thought the worst of Lewis until I got to know him 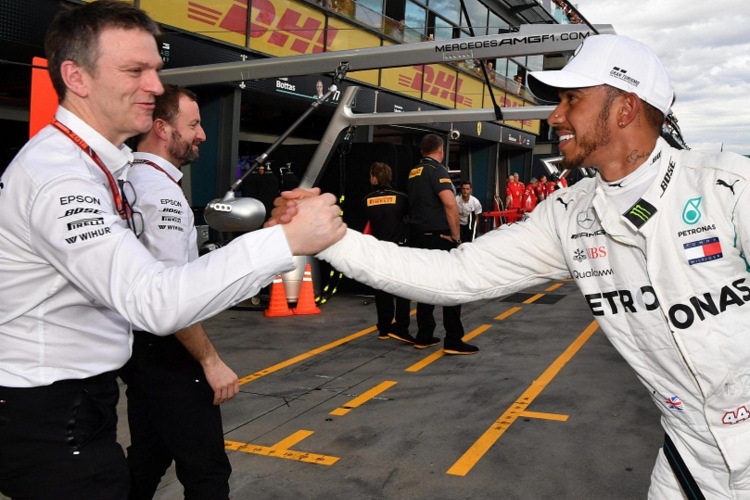 Mercedes’ technical director James Allison admits that before he got to know Lewis Hamilton he believed the Briton was not always sincere when talking about his successes, but since working closely with the five times Formula 1 World Champion all his preconceived ideas went out the window

Talking to Sportsmail, Allison made an honest revelation about his perceptions of Hamilton before working with him at Mercedes, “He will probably be cross with me for saying this, but before I joined Mercedes it sounded to me as if he was saying things that did not have the ring of sincerity to them, and I would think the worst of him. If he said it was his greatest qualifying lap, I’d think why say that when you have done tons of brilliant pole laps?”

“But when you are inside the team with him you know it is sincere. He will tell you candidly that he doesn’t have a brilliant memory, so each lap can seem the best in his mind. He is so pumped by what he has done that his comments are utterly boyish. And utterly charming. But from the outside, I found them utterly charmless.”

Allison, who a couple of years ago Allison lost his wife Rebecca to meningitis, also revealed how compassionate his superstar colleague was at the time, “He had an entirely unconfected desire to tell me he was sorry about my wife and a willingness to listen afterwards, which was very un-racing driver-ish.”

Allison: Work-wise, he doesn’t try to own every situation like he is the alpha male in the room

“Having seen a large range of people try to deal with a shocking event like that, not everyone handles it with grace or convincingly. Many people want the subject not to be there. You can tell when someone is for real on a topic as raw as that. His reaction allowed us seriously to come together and told me that I was dealing with someone who is a good person.”

“Lewis is a superstar and they don’t live the sort of lives we lead. But the man behind the facade has a lot to like about him.”

Clearly inspired by Hamilton, Allison talks of the champion’s time with double amputee Billy Monger and explained how nothing was contrived even though it might have been perceived otherwise, “What none of the cameras saw was them sitting together talking one to one afterwards for a long time. There was no payback for either of them but their own enjoyment.”

“I found it difficult to see the young boy with those wounds, with his family around who clearly loved him. We all had the opportunity to talk to him but none of us did in the way Lewis did,” recalled the 50-year-old tech guru.

Allison: At this time of year he is just a weapon

“Work-wise, he doesn’t try to own every situation like he is the alpha male in the room,” he continued. “He knows we all bring different aspects to the team and that he must give us space to do our job for him. His debriefs are not particularly long or short. When something needs talking about they are as long as necessary.”

“He sits there with a little book and writes things down over the weekend. Sometimes he misses something that we told him about. But he puts down what is important to him.”

“He gets stronger through the season. It’s as if he needs to know who his rivals are. And once it gets tighter he becomes more intense. Curiously, he gets easier to work with then. He becomes more forgiving of our screw-ups, more focused on the fight and more powerful as a team-mate. At this time of year he is just a weapon.”

In the wake of Hamilton clinching the title at the recent Mexican Grand Prix, Allison declared, “Lewis’ fifth World Championship, his fourth with Mercedes AMG Petronas Motorsport – in a season which has tested all of us to the limit, considering our car has not always had the pace to win from the front.”

“Lewis’ contribution to keep us in the fight and to carve out his very, very well deserved championship will go down in history as one of the great performances of our sport,” he added.