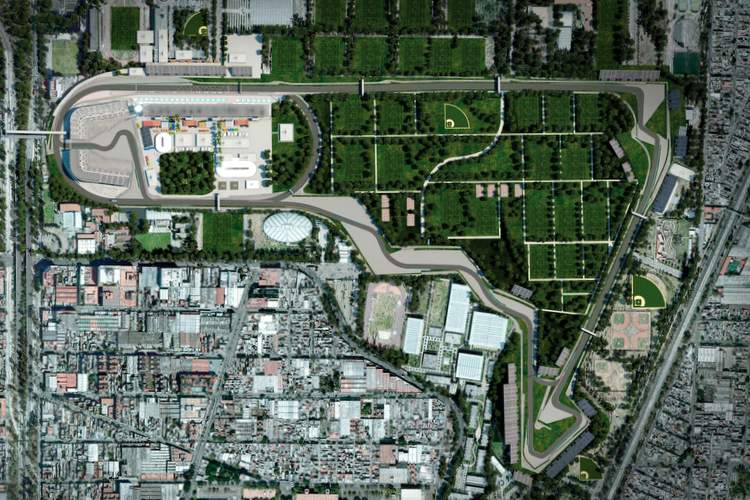 After the weekend in Austin, the Formula 1 circus heads south of the United States border for the Mexican Grand Prix at Autódromo Hermanos Rodríguez in Mexico City.

The entire track was resurfaced, with new pit, paddock and spectator stands constructed. The most notable changes from the old layout to the current version were an added sequence of corners comprising turns one, two and three, along with a revised set of corners through the Foro Sol baseball stadium, which was built inside the famed and feared Perlatada corner, which serves as the track’s final turn.

The new asphalt made for a slippery surface in 2015 and despite another year of weathering, it remained slick in 2017. Even as the refurbished track readies for its fourth year of Formula One action, drivers and teams alike expect grip to be elusive.

The smooth pavement is one factor, but Mexico City’s notoriously thin air is another significant contributor.

Sitting 2,200 meters (7,218 feet) above sea level, Mexico City’s high altitude means there is less downforce on the cars. To compensate for this, teams run more downforce than they would at similarly fast tracks like Italy’s Autodromo Nazionale Monza and Azerbaijan’s Baku City Circuit. But with top speeds in the neighborhood of 370 kph (230 mph), teams have to compromise between straight-line speed and the downforce necessary to push through the track’s corners.

Cooling is another issue facing teams in the Mexican Grand Prix. The thinner air means the turbo has to spin at a higher rate to inject more oxygen into the engine, and with the brakes being used for approximately 21 percent of the race’s 71-lap duration, keeping those brakes cool adds another degree of difficulty.

Focus points Altitude. The Autodromo Hermanos Rodriguez is situated at 2,200 metres, which is three times higher than F1’s next highest track (Interlagos in Brazil). The thinner air affects the cars in three significant ways. First, they produce less downforce. The cars run maximum downforce, yet they produce less aerodynamic grip than at Monza. Second, the internal combustion unit produces less power because there’s 75 per cent less oxygen than at sea level and, third, it’s harder to cool the car.

Most demanding section The Stadium (Turns 13-16). This is the slowest section on the lap and a lot of time can be lost if traction or turn-in are a problem. It’s easy for the drivers to lock the unloaded front tyre on the approach to Turn 13 and they have to be progressive with the throttle, or risk snap oversteer.

Unique difficulty Aerodynamics. The thin air allows cars to run similar wing levels to the Singapore Grand Prix, yet they produce 10 per cent less downforce than at Monza – the lowest downforce track of the year. As a result, the cars produce very little drag and are spectacularly quick along the 1.3km/0.8-mile pit straight. The drivers are on full throttle for 15s and top speeds peak at 354km/h (220mph) just prior to the braking zone.

Braking The cars spend 16s per lap on the brakes. The hardest deceleration is into Turn One, where the cars slow from 354km/h (220mph) to 106km/h (66mph) in just 70 metres, with a peak longitudinal force of 4.2g. The high altitude makes brake cooling one of the trickiest engineering conundrums of the season.

Power The cars use 1.4kg of fuel per lap, with 47 per cent spent on full throttle.

Aero High downforce. The cars run maximum downforce yet produce less aerodynamic grip than at Monza, due to the thinner air at high altitude. The reduced drag from the cars results in some of the highest top speeds of the year along the pit straight.

The Autódromo Hermanos Rodríguez provides teams with a unique set of requirements to maximise lap time. Superficially, the track appears simple, featuring an abundance of slow speed corners and straights. However, this does not account for the challenges introduced by the fact that the race takes place at an altitude of over 2000m, leading to a reduction in air density of more than 20%.

Downforce and Drag coefficients are determined by a car’s configuration, and are independent of density and velocity. However, the Drag and Downforce themselves are proportional to density, therefore meaning they are significantly reduced for a given Aerodynamic set-up in Mexico. This forces teams to run maximum downforce wings in order to claw back lost downforce from altitude – even with this, drivers relate the feeling to that they experience at Monza, whereas the ideal downforce configuration of this circuit would be medium-high if situated at sea level. 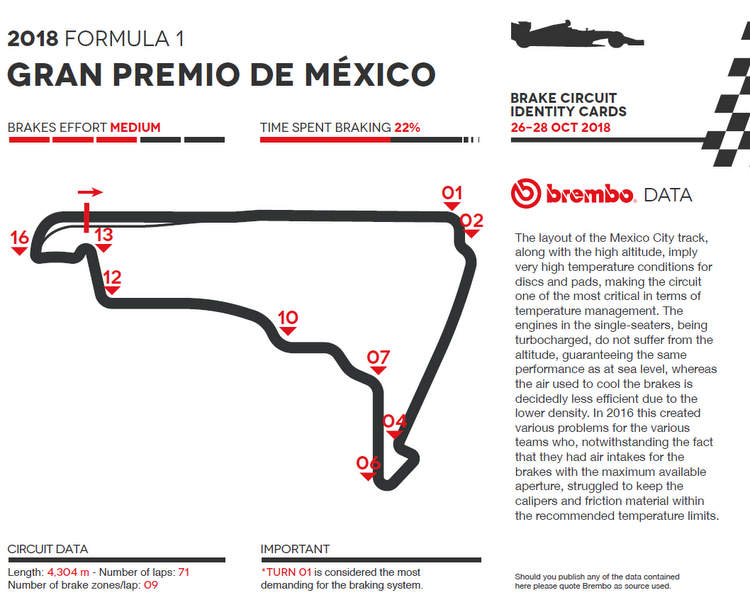