Inside Line: Lewis versus Max is the real deal 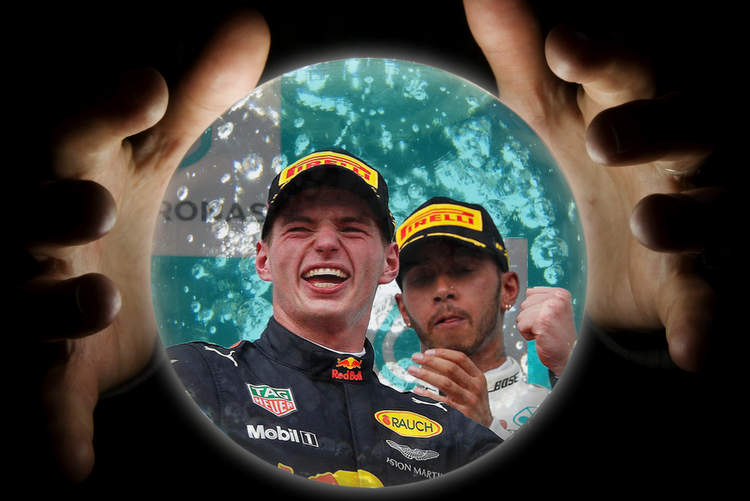 Max Verstappen and Lewis Hamilton finished second and third in the United States Grand Prix, late in the race the pair went side by side for several corners before the Mercedes got on the marbles and scuppered his chance for second place and the title, but the Red Bull driver too stubborn and resolute for that to happen.

On the day, Kimi Raikkonen claimed a deserved and popular victory to end his record-breaking drought of F1 victories, but for me the penny dropped: Max versus Lewis with equal-ish kit is the real deal, the clash of the two best drivers in Formula 1 at the moment which would be the box office stuff the sport needs.

My opinion of these two being best of the current crop may ignite debate between the factions, thus allow me to explain…

First Lewis, the soon to be five-time F1 World Champion is in the best form he has ever been in and he takes it to the next level whenever needed. How deep can this guy dig?

Granted, the Austin podium was a blip in a quartet of wins the preceded that, after Spa he has been supreme, ask Valtteri. He will probably win in Mexico to claim ‘number five’ on Sunday.

Actually, I would bet that even if he did not pitch up for the last three races, Seb would still not win! Where can I get odds on that?

Back to the point: some would argue Fernando Alonso would give the Mercedes driver a run for his money in similar performing cars. I would argue the pair had the chance a decade ago when in 2007 rookie Lewis matched double World Champion Fernando in the same team – on points they tied.

We all know the circumstances that prevailed that year at McLaren, but Fernando’s comportment did him no favours. Things went ballistic that year as we know but on track, the Spaniard was incapable of destroying the rookie in the garage next to him as he has ‘murdered’ once very highly regarded Stoffel.

What transpired thereafter? Fernando found refuge at Renault, Lewis went on to win the world championship in 2008. The samurai from Oviedo then got his stint in Red in which he came close but no cigar as Sebastian Vettel, Adrian Newey, Red Bull and Renault were at their dominant best.

Then he went to McLaren…

Meanwhile, the lad from Stevenage remained with McLaren, but the team started to stumble when Ross Brawn and Niki Lauda came calling.

Against the advice of many pundits who now ululate the excellence of Mercedes, Hamilton ditched his alma mater. Ignoring a barrage of universal criticism and collective scepticism he made up his mind.

Moral of the story: Let Fernando go and find more competitive pastures. He had his time and despite blowing it majorly, walks away with two titles and legendary status.

Max and Lewis have owned Sebastian

We are talking about now and the reality, with Hamilton at his zenith and growing in stature in a fantastic team, from what I see, only Max also in a fantastic team is on the same level or perhaps even better. Time will tell and I sincerely hope it happens sooner rather than later.

Before we delve into this nascent rivalry, let’s eliminate Sebastian Vettel (should anyone feel he is up there with the top two) from the equation because right now he is not at the level of either Max or Lewis. There is a crisis of sorts going on within the German’s world, perhaps related to Ferrari’s constant polemics and pressure. Who knows? But it is what it is.

Lewis has seriously owned Seb since Monza, the German’s exasperated gasp of disbelief when he was informed that he fell short of his rival’s pole-winning lap in Austin on Saturday, was another telling moment of many of late.

Max has owned Seb for ages, so no need to delve into that one.

So with the argument that Lewis and Max are the next big box-office draw, all we need now is Honda to get their sums right and Newey to wave his magic pen so that F1 fans can have the mega-contest we thought Seb would deliver this year, but failed.

This weekend it was evident that the pair have eyeballed one another and can read the same writing I see on the wall. More wheel-to-wheel battles loom.

During his pre-Austin interview with Sky F1, Hamilton joked when asked about the young Dutchman, “If it’s Max, you give a lot of space.”

Something about the very brief, but uneasy smile is what piqued me to write document this epiphany. LOL!

Jokes aside, there was a nervousness, a wariness and that smile that signalled to me that Max is the guy Lewis really respects and perhaps fears too.

Max: Then I saw also that Lewis ran out of room

Credit to Max for taking the remarks as a backhanded compliment and also in good humour, “I think that’s a good thing. They might make it sound like I’m a little bit more risky but I’m just a hard racer.”

Then popped his own compliment, “It’s always good to race against world champions. He was very fair. Of course, he’s also thinking about the championship. It was cool.”

In the race, their scrap for second in the dying laps of the race at Circuit of the Americas was one of the highlights of an action-packed race. After starting from 18th, Max charged through the field and found himself in second place, stalking race leader Raikkonen with Lewis in his mirrors on fresher rubber and lapping far quicker.

On lap 54 of 56, exiting Turn 12, the silver car was under the blue car’s rear wing for several corners they were side by side, bobbing and weaving

Through Turns 16,17 and 18, Hamilton hung in on the outside line but just as Lewis appeared to have done the business, Max kept the defensive line. The #44 car got on the marbles and that was that. Stubborn Max: One, hard-charging champ: Nil.

Afterwards, the pair shared some good-humoured banter in the press conference:

The World Champion elect added, “I was trying to win the race but you look at the two guys next to me, they’re not fighting for a championship so I had to be very very careful how I navigated around them. Championships are not won by fighting and making silly mistakes.”

“I went through that corner, I gave him way too much space just to be sure that I didn’t get clipped, for example, didn’t get taken out because I didn’t know if you would understeer into me or could be aggressive.

“If that was me and Seb, for example, I would have been a lot more tighter and more aggressive if we were fighting for the championship, for example, but there was no need. The key was that I at least finished ahead of Seb and for me it doesn’t matter when you win the championship as long as you get it done.”

Max recalled the late-race duel, “At that time I was really struggling with the rear tyres. I locked up through Turn 12 and then there was a good fight through the Esses, through the hairpin and in the right-hand corner I was just pushing as much as I could but hanging on but clearly also Lewis was already on the edge, so happy to stay in second.”

In closing, it is also exciting to consider there are a bunch of young promising drivers in A-team race cars – Charles Leclerc with Ferrari and Pierre Gasly with Red Bull – who could well be flung into the mix at the sharp end.

But for now, looking into my blurry crystal ball, the evidence is overwhelming that Max versus Lewis is a duel we need. And if there are any doubters, imagine Max in a Ferrari this year…