Vettel: Once the sh!t hit the fan it didn’t get better 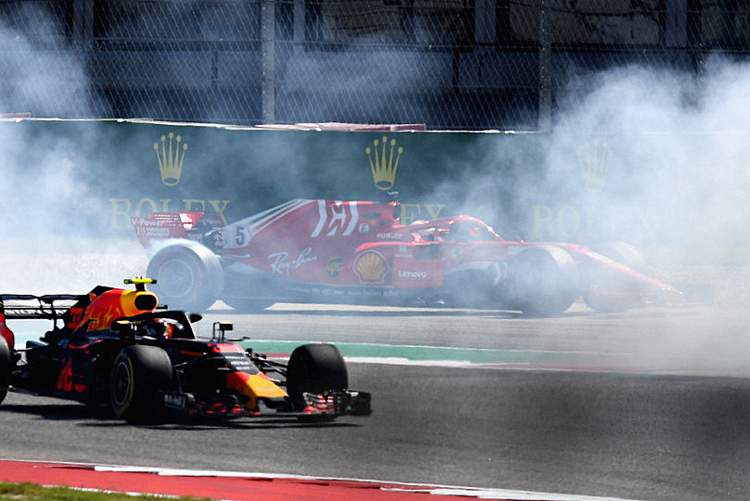 Sebastian Vettel revealed how his team took the wrong turn in development war during the second half of this season while pointing out that once the rot of fumbles began to erode his Formula 1 title challenge there was no stopping the downward spiral.

Speaking in the wake of a thrilling United States Grand Prix, where Ferrari were on par if not a tad better (faster) than Mercedes at Circuit of the Americas where Kimi Raikkonen made the most of his car to take a popular victory and bring to an end his record F1 victory drought.

In the other red garage, there was a more sombre mood, Vettel had battled his own demons during the course of the weekend in Texas.

First, his unnecessary FP1 shenanigans compromised his race by demoting him three places down the grid to fifth, then early in the race, he collided with the Red Bull of Daniel Ricciardo, the #5 car spun off, was swallowed by the pack and had to play catch-up for the rest of the afternoon.

Nevertheless, he dug deep and charged back through the field, his efforts enough to prolong the agony of title defeat for another week and left him considering his team may have erred by not reverting to the pre-summer break proven package sooner.

As a result, it is hard to remember when last a title campaign crumbled so dramatically in Formula 1 history. The truth is that Vettel’s Austin misadventures mirror his season of mishaps, so many to mention we have table them.

Seb: I think we need to still grow and learn

In short, a catalogue of errors have dotted his season, far too many for a driver of his status, which since they manifested, perhaps on the day he pranged into the barriers at Hockenheim, have not stopped haunting him.

Speaking to reporters after his latest escapades, Vettel acknowledged, “For sure. Once the shit hit the fan it didn’t get better. I think there were too many of those incidences. I don’t believe in luck or bad luck but surely here or there things didn’t go our way entirely, but that is how it is.”

“It is not like there is a fundamental problem, and in the end it looks a lot worse than it was. I think I have no problem admitting the mistakes I’ve done on top.

“I think there were some things that happened to us that didn’t help us. But I think the crucial bit has been that for a big part of the season we didn’t have the speed to really be there, and then other stuff happens that maybe doesn’t help that.

“I think overall we have the potential. I think we need to still grow and learn. So I think there will be a lot of stuff over the winter that we need to review, all of us, including myself.”

Seb: I am pretty sure we will do what is necessary to get on top of it

As for Maranello realising their mistake, Vettel explained, “It took too long. You can see it is good news but you can also see it is bad news. If we have to go back to a car that has been competitive three/four months ago, then surely it cannot be good news if you think about it. I think for us on the technical side it is important to understand what went wrong.”

“I think all the steps that we did, they seemed to make sense but now looking back they didn’t. Clearly there was something we missed, and we haven’t understood yet why and where the error exactly took off or started.”

“So there is a lot of stuff for us to do and understand, but I am pretty sure we will do what is necessary to get on top of it,” explained the four times F1 World Champion.