Albon poached by Marko for Toro Rosso in 2019? 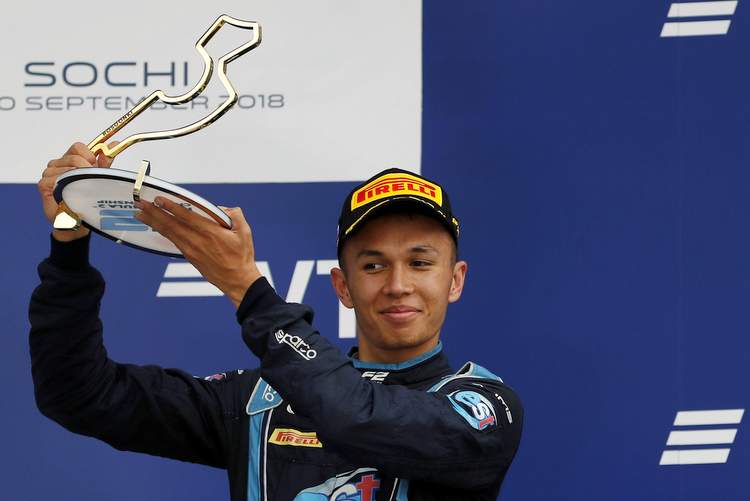 Although the news has yet to be confirmed, that’s the word in the Formula 1 paddock after the United States Grand Prix weekend, with e.dams boss Jean-Paul Driot letting the cat out the bag, “It came out of the blue.”

“We are very frustrated within DAMS and Nissan e.dams because as far as DAMS is concerned and Formula 2 is concerned, we have done a lot financially in order to assist Alexander Albon racing.”

“We gave him a good car because the year before the team he was with, he didn’t really perform well, but with us he has shown how very quick he is, which I never doubted. We signed him to a three-year contract, we helped him to develop and to polish his image, now Toro Rosso arrived with Dr Marko to say that he wanted to have Albon in his team.”

“If you ask a blind man if he wants to see, of course you know the answer. When he talked Formula 1 to a driver who has always dreamt of it, you know what the answer will be.”

“We are negotiating with Toro Rosso, Nissan have top management who were not really happy, as you can imagine, very unhappy because we had signed him for three years. But we are trying to find a solution,” added Driot.

In short: Toro Rosso have poached Albon for 2019 and beyond.

The 22-year-old was part of the Red Bull Junior Team in 2012, but his career to date has hardly been stellar but this year in Formula 2 his emergence in the latter half of the season has been impressive and lies second in the standings with two points scoring rounds remaining in the championship.

It appears that Albon’s performances and fits Red Bull’s junior driver profile. Although neither party is saying much on the issue, with Marko even claiming there is a long list of candidates for the drive but, by all accounts, these have been narrowed down to Albon.

Meanwhile, Albon was replaced by e.dams for the collective Formula E test in Valencia by Oliver Rowland suggesting that the Toro Rosso offer is a real deal which will see him on the Formula 1 grid next year.

How things change… Earlier this year with Formula E on his mind, Albon Tweeted:

From today, I’ll be starting a new chapter in my career! Extremely excited to be competing in @FIAFormulaE with Nissan e.dams. A big thank you to @damsracing and of course @nissan for their trust in me. A lot of things to learn but I can’t wait to get on with it!#NissanFormulaE pic.twitter.com/wm0UeKqWTW

With Lance Stroll certain to kit up in Force India colours next year, Williams have a seat available for 2019, the last seat on next year’s grid should Toro Rosso opt for Albon.