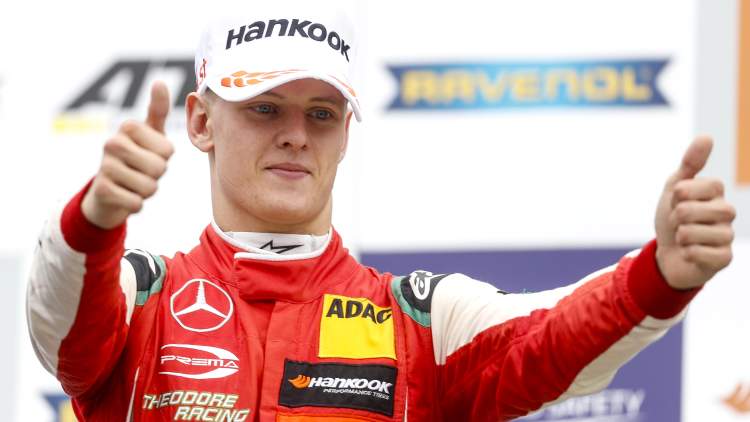 Mick Schumacher – Schumi III – is already being tipped to carry the famous surname into Formula 1 as the newly-crowned European Formula Three champion finished the season with his 14th podium placing on Sunday.

The 19-year-old son of stricken Formula One legend Michael Schumacher took second in the final race of the 2018 season at Germany’s Hockenheim circuit.

Having already been confirmed European F3 champion on Saturday, Schumacher finished the last race of 2018 behind his Prema team-mate Robert Shwartzman for his 14th podium place in the 30-race season, with seven wins.

Former F1 driver and team owner Gerhard Berger, now boss of DTM has had a good look at the youngster as the European F3 Series runs on the same calendar as the premier German tin-top series.

After watching Schumacher junior clinch the title on the final weekend at Hockenheim, Berger told reporters, “I am happy for Mick. He has prevailed and won the title early with a podium finish by his own means today.”

“However, I am also very happy for Michael Schumacher and I wish that he will be back with us one day to watch Mick’s future career together with all of us.’

“When he is able to keep on delivering this performance, his career path will bring him into Formula 1,” predicted Berger.

Schumacher’s rapid rise from mediocrity to front-runner during the course of this F3 season was nothing short of sensational, impressive performances thrust him from relative obscurity to the current limelight that has him on the brink of Formula 1 and, of course, the inevitable comparisons to his legendary father.

The head of Mercedes motorsport – whose engines power the youngster – was equally impressed as Schumacher impressed massively with five straight wins last month to seize control of the drivers’ championship.

“He can be a big name in our sport,” said Mercedes boss Toto Wolff. “The boy was in the spotlight from the beginning and was under huge pressure, it’s far from easy to deal with that.”

In Italy, Gazzetta dello Sport declared there is an “heir to the Schumacher dynasty” – 14 years after Michael Schumacher’s last F1 world title and 28 years after he was crowned German F3 champions, at two years older than Mick is now.

For the teenager with the one of the most famous surnames in motorsport, the first major title of his career was “a nice feeling and confirmation that we’re doing something right,” he said, making sure to thank his Prema team for their support.

Schumacher has qualified for a FIA “super licence”, a prerequisite to race in Formula One, and is weighing up whether to move up to Formula Two or higher.

“Not yet,” he replied when asked if he has decided about his future, but revealed talks are in progress.

Schumacher’s success has generated huge interest in F3, on Saturday night, he was interviewed live by German national broadcaster ZDF.