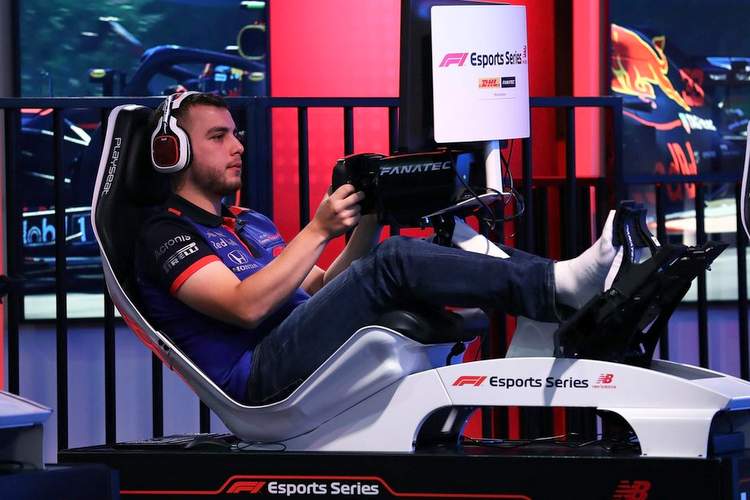 On Wednesday night, in the opening round of the F1 Esports Championship at London’s Gfinity Arena, the Toro Rosso Esports team made a strong start to its campaign thanks to a brilliant Race 3 victory from Frederik Rasmussen.

The team’s morale was bolstered at the event thanks to a special appearance from our F1 driver, Pierre Gasly, who was in attendance to watch and give his support to our Esports sim racers.

In a thrilling final lap of the Baku Street Circuit, Frederik narrowly edged F1 Esports defending champion Brendon Leigh just meters before the finish line, to claim top spot in the final race of the opening round.

Combined with a fifth-place finish for Patrik Holzmann in the final race, and three other top 10 finishes between the pair, Toro Rosso Esports currently sits second in the Constructors’ Championship, with Rasmussen and Holzmann P2 and P10 respectively in the Driver Standings.

“I feel great after winning the final race in Baku, it was one of the best races I’ve ever had! I expected to be strong before coming here, but after China and Australia I didn’t expect to win. I was thinking during the race, ‘I wonder how long I will keep up with these guys’, then I overtook them and was able to keep the position to win. It was amazing! I didn’t have any good luck in Qualifying, China and Baku were OK, but I chocked in Australia, I ran out of fuel and started 15th. I think now we just need to work together after this round and we can improve further on our result.”

“It was a great day and amazing show again. I already had the experience last year but it only got bigger this year, it was super exciting! In two of the three races I Qualified in P9, then in the third race I was on the front row which was great. Overall, it could have been better as starting in P9 twice made it difficult in the race and compromised the day a bit, I need to work on that for next time. Personally, I’m not super happy with how the races went, but as a team we can be happy to leave second in the Constructors’ Championship, so as a whole it’s a great day for the team, and I’ll try to improve for next time. The next races are at tracks I like a lot, so I’m looking forward to them. We will have more time at home to practice and fine-tune the setup, I’m pretty confident we will be stronger at the next event.”

As our team is made up of three sim racers, Cem Bolukbasi was also in attendance for the season opener, boosting team spirit and giving full support to his teammates.

Cem Bolukbasi [Turkey]: “It was a pretty exciting day, and I’m looking forward to help my teammates a bit more next time. They’ve had a great event today and I’m really proud of our results, I never doubted them so I’m happy they brought home second place in the Constructors’ Championship. We just need to work a bit more on the race setups, do some more race strategies and simulations and that would put us in a better place. This event we had the pace to qualify on pole in all of the races but the race pace was lacking a bit, so we need to work on that as there is still margin for improvement. I feel confident for the future events and we will all give our best.”