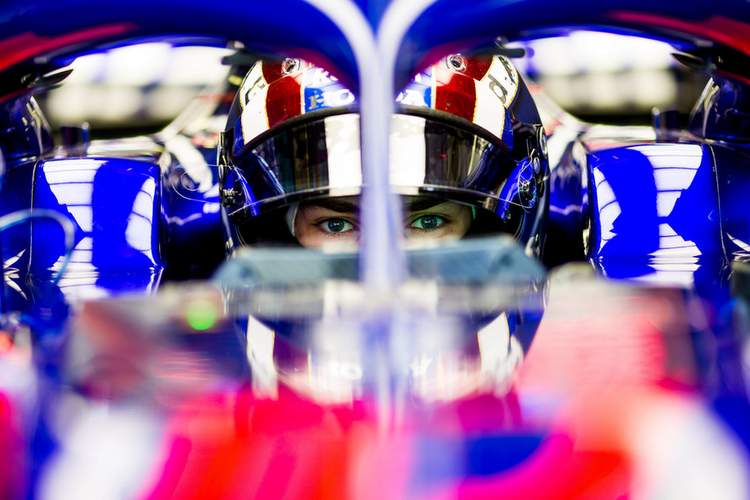 Toro Rosso driver Pierre Gasly had a very scary moment when a piece of debris speered into his helmet visor on the opening lap of a disappointing Russian Grand Prix for the Red Bull junior team.

Shards of carbon-fibre, from wing bits off of Daniel Ricciardo’s car, went flying when the Red Bull was tagged during the opening lap at Sochi Autodrom on Sunday.

Gasly was in the melee and recalled, “Before that, at Turn 1, I think Daniel lost a piece of carbon that went straight into my visor.”

“When I saw it coming I thought: F**k it’s going through the visor! But the visor is really strong because it just hit it and fell into the cockpit.”

“This was really, really scary because I thought it was going through and straight in my eye, but it hit my visor and fell in the cockpit, so in Turn 4 I had to take the carbon piece and throw it from the cockpit.”

“I need to check [the helmet] because I didn’t check after the race. But just at the time I had half a second to see it flying and hitting the visor. It was like a winglet that maybe came from somewhere from contact with Daniel, but it came like pointing towards me and straight at my right eye.”

“It’s going super-fast but still I had time to have all these thoughts and see it coming. So in these kind of moments you’re processing it quite fast.”

“Maybe we need to keep trying to improve the thickness of the visor and try to make it as strong as possible. For sure the speed has an effect as well on the impact, at that time I was coming out of Turn 2 so I wasn’t so fast.”

“So maybe the impact with it was luckily not as big as if I had been at 300km/h,” added Gasly.

In qualifying for the 2009 Hungarian Grand Prix, Felipe Massa was struck on the helmet from a wayward spring, detached from the Brawn of Rubens Barrichello.

The Ferrari – with driver seriously impaired – crashed heavily into the tyre barriers.

The spring had pierced a part of Massa’s helmet which injured his eye. From the wreck, Massa was airlifted from the Hungaroring track to hospital where he was admitted in a “life-threatening but stable” condition.

Fortunately, his recovery was swift and within a week he had returned to Brazil to recover.

That was a split second in his race which only lasted four laps, a brakes issue on both Toro Rosso forced the team to DNF both cars, early showers for the young Frenchman’s and his teammate Brendon Hartley.

Of his very brief race on Sunday, Red Bull-bound Gasly said, “I didn’t start so well, we had a little combustion issue at the start so I got the anti-stall starting the race. So I lost places. Then I arrived at Turn 1 and the brake pedal was very long. For the first two laps I could feel it was getting longer and longer, it was a strange feeling.”

“Then after that the brake pedal just got worse and worse, just got really long, so I asked the team what’s going on and they said at the time that they had lost the front left brake sensor.”