Hamilton: Vettel nearly put me in the wall 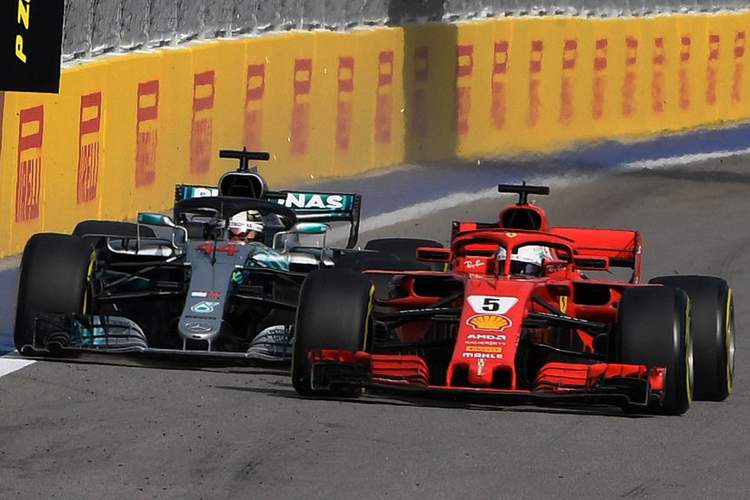 Almost lost in the debate regarding Mercedes’ blatant use of team orders during the Russian Grand Prix, is the fact that title contenders Sebastian Vettel and Lewis Hamilton nearly pranged as they battled for track position at Sochi Autodrome on Sunday.

Just before the first round of pitstops, Mercedes were one-two with Vettel keeping them in his sights in third. Bottas was first in for fresh rubber, followed Vettel a lap later, his crew did a good job to get him out in 2.6 seconds.

When the Ferrari emerged on track it was in a silver sandwich – Bottas ahead and Hamilton behind – the undercut had worked for the Reds.

But the Mercedes was visibly the better car (as it had been all weekend) and the Ferrari driver simply did not have the ammo to slug it out, so he went defensive for as long as he could.

Inevitably, roaring into Turn 4 on lap 17, with the #44 Mercedes nose tucked under the #5 Ferrari wing, Hamilton went to the right and Vettel blocked him, but somehow there was enough space for the Merc to squeeze through to take third place at that point in the race.

It appeared a double-block move by Vettel and the FIA race stewards promptly investigated but deemed it a racing incident.

Hamilton was not happy when it happened, complaining to his team about it over the radio and after the race, he remained unconvinced, “For me, he did move over to the inside and then he moved again and nearly put me in the wall. I thought that was a double move but I guess they didn’t see that.”

“Fortunately I was able to get out of the wall and then it was a question of who was going to brake later at the next corner and I wanted it more at the time.

“We shouldn’t have been in that position. I don’t understand how strategically we ended up in that place,” added Hamilton who went on to win the race, after teammate Valtteri Bottas was ordered to relinquish the lead.

Vettel gave his side of the story during the post-race press conference, “Lewis was quite close so he got DRS down the straight. I saw him coming, it was very difficult to see with the mirrors.”

“I thought I moved before the braking, so I wanted to make sure I covered the inside. Didn’t mean to be – how do you say? – an irritation at any point.”

“I had a compromised run out of the second corner, defending my position. Then it was very difficult to see where he was. I couldn’t see him for a very very long time and then just saw his tyres and I knew that he was then somewhere there.”

“I didn’t want to be a complete arse by pushing him into the dirt and potentially into the wall so I wasn’t quite sure where he was and then at some point I had to give in.”

“I thought I could maybe get it back out of Turn 4 but I had to give him the entrance otherwise, you know, at some stage it just becomes silly,” explained Vettel.

With five rounds remaining in the championship – Suzuka, Austin, Mexico City, Sao Paulo and Abu Dhabi – Hamilton on 306 points leads Vettel by 50 points in the world championship standings. A fifth world title beckons for one of the two at the end of this season.

Big Question: Was the block by Seb on Lewis dirty?