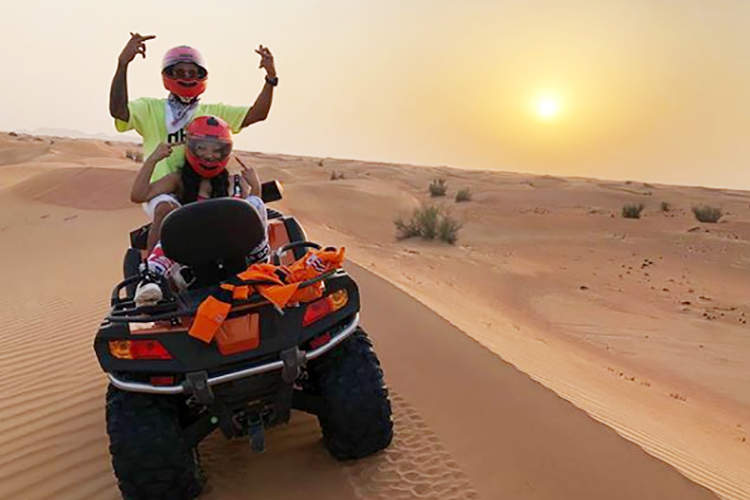 Formula 1 World Champion Lewis Hamilton and rapper Nicki Minaj posted pictures of them riding a quad bike in the desert near Dubai, while unashamedly breaking UAE law and fueling rumours that they are now an item

Minaj and Hamilton clearly enjoyed a quad bike ride through the desert, posing while ‘flipping-the-bird’ during their jaunt, in a country which has zero tolerance for such gestures – expats have been jailed for similar offences.

A photo, posted on Hamilton’s Instagram shows the pair with the Mercedes driver standing at the back and Minaj in the rider’s seat – the pair raising their middle fingers:

🇹🇹🇬🇩 Caribbean tingz what I on. Me & Lewis gettin paper like what ink dry on. #Versace 💧

Hamilton leads the Formula 1 World Championship by 40 points with six rounds remaining, but this has not resulted in a calmer personal schedule for the jet-setter who spent over 50-hours in the air during a ten-day spell in which he launched his own Tommy Hilfiger clothing range.

After winning the Italian Grand Prix, Hamilton flew from Milan to London, to Shanghai, back to London, then on to New York where the Independent reports “he enjoyed the support of Minaj, as well as American rapper Travis Scott and Canadian model Winnie Harlow, as he unveiled his new line.”

He then arrived in Singapore and did the business by qualifying on pole with a stellar lap and then powering to victory and the forty point lead he now enjoys is his reward.

Meanwhile, the photo of Hamilton and Minaj gesturing indecently is unlikely to get them in hot water in Dubai whose leaders hanker for celebrity visitors and are not shy to employ two sets of laws: those for designated VIPs and those for the rest.

With regard to the middle-finger offence, Gulf News reports that apart from what is typically one month jail time for offenders they also face “as per the Federal Penal Law, deportation has been compulsory against those found guilty of flashing their middle finger in public for several years now.”

A Google search reveals several recent cases in UAE courts regarding the matter of middle-finger gestures, not only person-to-person but also (text or emoji) insults sent through messaging apps.

Publishing what is deemed offensive imagery or comments on social media is also a punishable offence in the UAE.