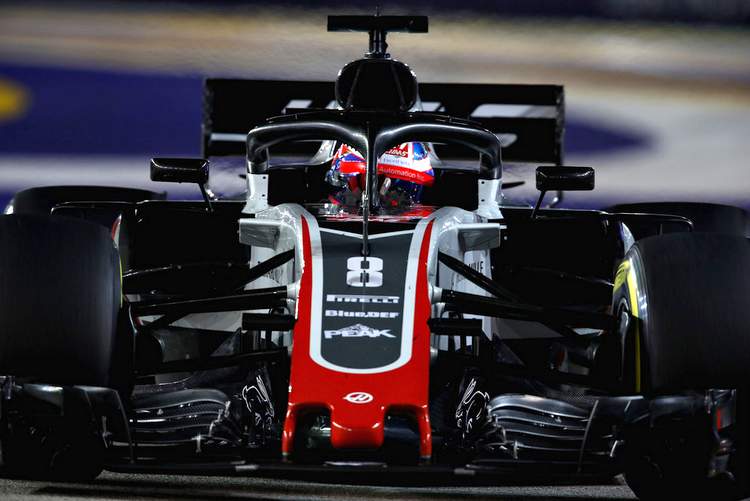 Romain Grosjean has been accused of a novice mistake during the Singapore Grand Prix after ignoring blue flags when race leaders Lewis Hamilton, Max Verstappen and Sebastian Vettel battled for the lead while the Haas driver remained apparently oblivious of their presence.

As a result of the Frenchman’s shenanigans on track, he was slapped with a two points penalty which was added to his license. Now he is three penalty points short of serving a one race ban.

After the race, Formula 1 race director Charlie Whiting told reporters, “Romain just completely forgot the golden rule of blue flags and that is if you are in a battle you’ve got to forget about your own battle and move over.”

“I’ve drilled that into them many times, and I think he completely forgot about it. He was so intent on his battle with Sirotkin that he just – the light panels were flashing with his race number on them – and Lewis was much much faster.”

“It was probably one of the worst cases of ignoring blue flags that I’ve seen for a long time,” added Whiting.

Grosjean apologised afterwards, “I’m sorry if I blocked anyone, it was not my intention. I believe I did my best. I was fighting with Sergey, who was playing a little bit of go-kart racing out there.

“I couldn’t really slow down. Pierre [Gasly] was on my gearbox and Sergey was on my front wing. So I passed him, then as soon as I passed him, I let Lewis by,” added the Haas driver.

Grosjean has had a topsy-turvy season, with a bad patch mid-season where many believed he was “an accident waiting to happen” and did happen on a couple of occasions.

The 32-year-old Frenchman, with 137 grand prix starts on his CV, appeared to get his act together in the latter half of this season, but clearly is still prone to mistakes – such as this latest one – which one would expect maybe once from a rookie.