Vettel: We beat ourselves 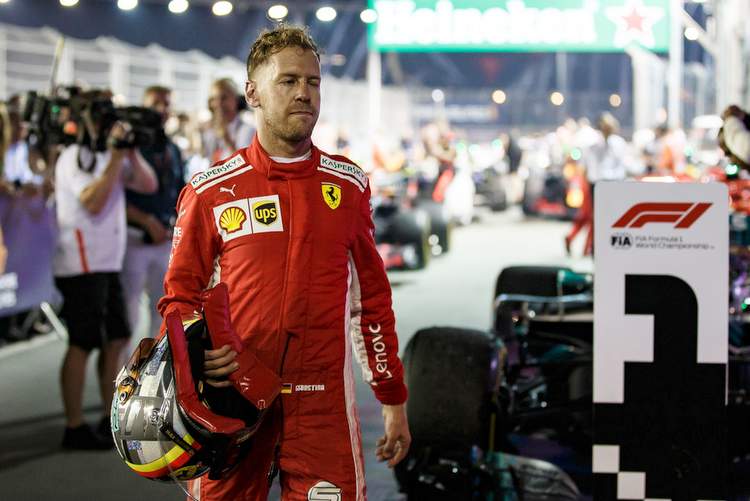 Sebastian Vettel yet again lamented missed opportunities as he finished third in the Singapore Grand Prix and was forced to watch his title rival Lewis Hamilton go on to win the race and increase the championship lead to 40 points.

Before the early safety car, Vettel attacked the Red Bull of Max Verstappen to slip into second place with a slick move, but Ferrari pitted Vettel very early in what was a gamble that in retrospect simply did not pay off.

The Ferrari pitstop prompted Max Verstappen to get on the loud pedal and when he emerged from the pits Vettel was behind, the overcut had worked a treat. The Red Bull remained second until the end despite a brief period when he got very close to Verstappen when they hit traffic, but nothing came of it.

Vettel doubted the strategy call and said on the team radio: “No chance, we were again too late. These tyres will not make it to the end.”

After the race Vettel conceded, “We tried to be aggressive in the beginning and obviously it didn’t work out. With the way we raced today we didn’t have a chance.

“I said before the weekend we could only beat ourselves and I think today we didn’t get everything out of our package. Overall we were not fast enough. We didn’t have the pace in the race,”

“The strategy problems don’t help obviously, I was mostly thinking about today’s race and today I think the way we raced, we didn’t have a chance. It was pretty obvious what we tried to do and it didn’t work.”

“Red Bull did very well to react and jumped us. It wasn’t too much that was missing, but with those tyres the main priority was to make it to the finish.”

“The strategy was to get ahead of Lewis, which didn’t work, and it was a pity that we lost the second place. Then the main focus was to maintain the third position.”

“I wasn’t very confident we could make it to the end, but it did. It was surprising to see that Valtteri was not able to keep it up and he was struggling more than I was. It was clear we were not fast enough in the race, we need to understand why.”

“What we did we tried to get to first position and get ahead, but Lewis was too quick. Once you are ahead you can control the pace around here, but we never got ahead.”

“I will always defend the team. The decisions we took in the race, to try and be aggressive, were to try and win the race and when it works it’s great.

“But overall we had a very strong package, both Kimi and myself looked very competitive throughout practice, but in the end the race result we finished third and fifth.”

“Like yesterday, not where the speed of our car belongs. That’s what I mean when I said we didn’t get everything out of ourselves.”

“Lewis said he didn’t expect to come here and gain 10 points and we probably didn’t expect to lose 10. I never believed we had the fastest car by a big margin as people said – I know we have a good car.”

“The speed is there and today, if anything, we were a little bit slower. But it’s difficult to draw conclusions as I had a very different race.

“I don’t think we have any tracks to fear that are coming, so no need to be afraid of what’s coming,” added Vettel.