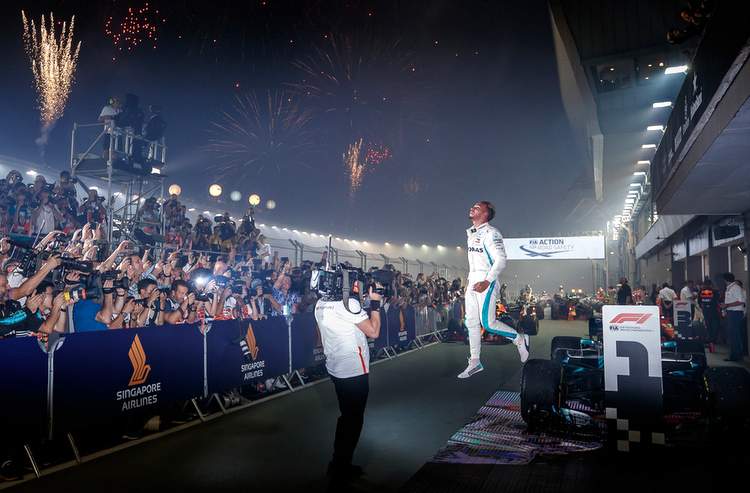 Mercedes driver Lewis Hamilton powered to a well-controlled and dominant victory at the Singapore Grand Prix, extending his championship points lead to 40-points with six rounds remaining on an evening that won’t be remembered for riveting entertainment.

The top six crossed the finish line in the same order they lined up on the grid on a night which physically punished the drivers, the World Champion knelt beside his car and said, “I’m spent. It felt like the longest race of my life so I’m glad it’s over.”

A day after his magical qualifying lap won him pole, Hamilton made no mistakes at the start of the race, getting off the line cleanly and ahead, but behind him the Force India’s collided when Sergio Perez drifted into teammate Esteban Ocon, the Frenchman slamming the wall in the process.

The incident prompted a safety car, but when the track turned green the Mercedes shot into the lead where it remained all night, Hamilton winning for the 68th time in his career.

The facts are that even if Vettel wins the next six races, the Briton need only finish second in all of them to win the title. Title #Five is now well within reach.

Hamilton said afterwards, “It was long, but it was still fun. Driving this track is incredible, especially with these cars. I got a great start and was able to control the pack, control the tyres and push where I needed to push.”

“It definitely got a little bit interesting towards the end with the backmarkers as you could already feel the draft from the cars when you were five and six seconds behind. And you can’t really see the blue flags, they are quite dark. Max had an opportunity really. I had to go on massive defensive while still racing the backmarkers.”

Behind the winner, Max Verstappen crossed the line second despite dropping to third early on in the race when Sebastian Vettel got by with a clinical move.

For some reason, Ferrari pitted Vettel early and compounding the mistake he came out of the pits in traffic which cost him as it was the signal for Verstappen to get on the loud pedal, the Dutchman delivered and when he emerged from his stop the Ferrari was behind him.

Verstappen was tired but content with his race, “It was not bad for us. It was a shame about the first lap but the team had a great strategy so we could get to second. In the end, we knew second was going to be the result. Behind the safety car we had a lot of problems, but second was a great result.”

The Reds messing up their sums once again and third place was Vettel’s reward.

He said, “Overall we were not fast enough, we didn’t have the pace in the race. We tried to be aggressive in the beginning and obviously it didn’t work out. Pitting was no option so we just focused on making it home.”

“I’m mostly thinking about today’s race [and not the title], and with the way we raced today we didn’t have a chance. I said before the weekend we could only beat ourselves and I think today we didn’t get everything out of our package.”

Amid the boredom (after the Ocon v Perez) incident, it would be unfair not to mention a flurry of on-track acion as Hamilton came upon backmarkers and by the time the dust had settled Verstappen was staring at the Mercedes gearbox while Vettel had a similar view of the Red Bull.

But after the hurdles, the trio spread out again and by the end of the race Hamilton crossed the line nine seconds ahead of Verstappen, with Vettel almost 40 seconds adrift.

Late in the race there was a sliver of excitement when Valtteri Bottas (Mercedes), Kimi Raikkonen (Ferrari) and Daniel Ricciardo (Red Bull) concertina-ed with Bottas in fourth, his mirrors full of the Ferrari and Red Bull.

But the deadlock remained on Marina Bay Circuit, where overtaking is nigh impossible and the trio remained in that order as they crossed the line.

Off the TV radar, Fernando Alonso was Best of the Rest by over twenty seconds, the veteran Spaniard wrestling the second worst car on the grid from 11th to seventh place, at one point setting the fastest lap of the race on his way to a well earned seventh place.

Renault’s Carlos Sainz shadowed his fellow countryman all race long to finish eight, ahead of rookie Charles Leclerc who again worked wonders in the Sauber to claim ninth. The final point for tenth went to Nico Hulkenberg in the Renault.

Down the order, Perez followed up his incident with teammate Ocon with a wayward moment when he swerved deliberately into the Williams of Sergey Sirotkin, the Mexican given a drive-through penalty for his transgression.

Vettel was only able to manage third place after a bright start in which he passed front-row started Max Verstappen on lap one faded when the Dutch driver was able to reclaim the position during in the pit stops and Vettel was forced to run a conservative second stint on more fragile tyres than his rivals.

At the start pole-position man, Hamilton made a good start to keep Vestappen at bay. Vettel, starting third, also made a good getaway and he on the approach to Turn 7 he was able to set up a move on the Red Bull and stole P2 as they swept through he corner.

Further back, Ocon and Perez tangled, with the result that the French driver was bounced into the wall at the exit of Turn 3 and the Safety Car emerged.

When racing resumed at the end of lap four, Hamilton held his lead over Vettel and Verstappen, with Bottas in fourth place ahead of Räikkönen and Ricciardo, who had held his grid position after the start.

The race then settled and by lap 14 Hamilton had eked out a 2.2s lead to Vettel, with Verstappen a further 2.3s behind. Daniel was now 3.5s behind fifth-place Räikkönen.

Vettel then made a pit stop on lap 14, taking on ultrasoft tyres. Mercedes responded by pitting Hamilton at the end of the following lap, though the championship leader was sent out on soft tyres. Max

Hamilton emerged from his pit stop ahead of Vettel, who then found himself lodged behind the slower Perez for a lap. The delay allowed Red Bull to pit Verstappen for softs, and after a 2.5s halt the Dutch driver emerged ahead of Vettel to once again hold P2.

After Raikkonen and Ricciardo made their stops, with the Finn on softs and Ricciardo on ultrasofts, Hamilton once again led, with Max 4.5s. Vettel was now 2.6s behind Max, with Bottas fourth ahead of Räikkönen and Ricciardo, who was 10.8s behind the second Ferrari.

The race again began to settle, until shortly after the midway point, when Perez in attempting to get past Sirotkin, inexplicably swerved left and hit the right side of the Williams. Sirotkin was able to continue but Perez was forced to limp to the pits for long repairs and then received a drive through penalty for causing the collision.

At the front, Hamilton was now getting tangled up in backmarkers and that briefly allowed Verstappen to close in but the race leader was able to thread his way through the traffic, however, and the gap was soon back up to 3.3s.

Hamilton then controlled the pace with ease and after 61 laps crossed the line to take his 69th career win with 8.9s in hand over Verstappen who scored his sixth podium finish of the season to date and the 17th of his career overall.

Behind him, Vettel took third ahead of Bottas, Räikkönen and Ricciardo. Alonso was seventh, Sainz eighth in front of Leclerc and Hulkenberg. 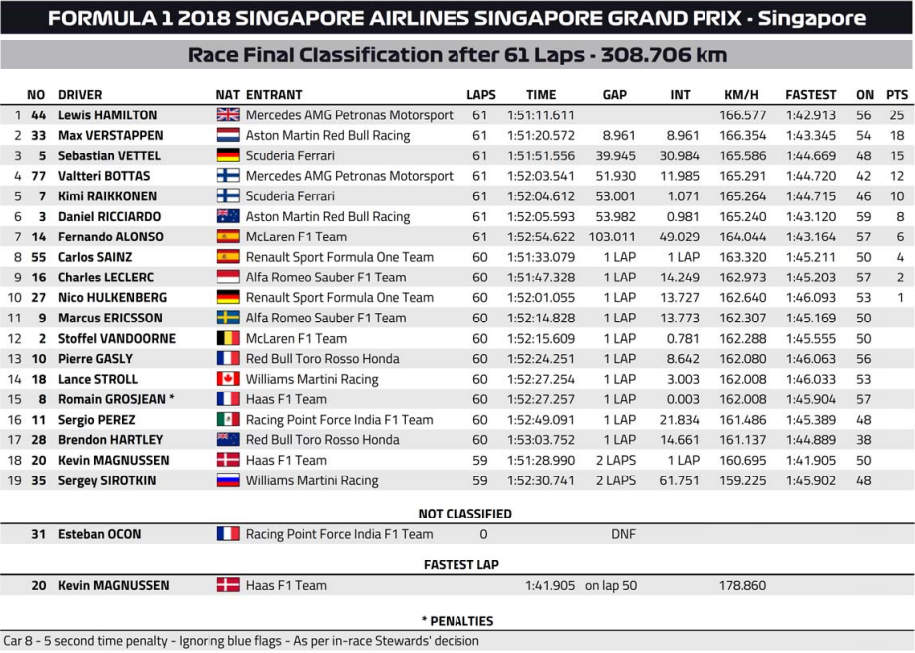 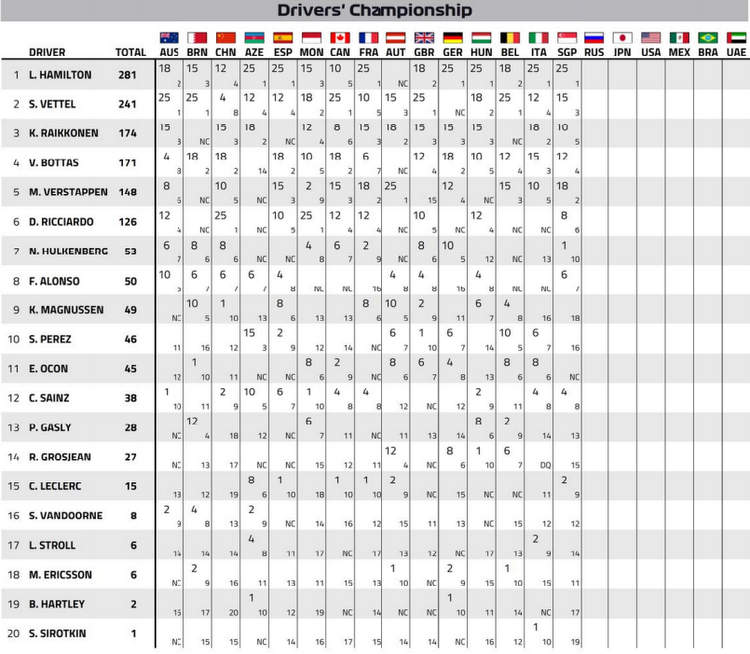 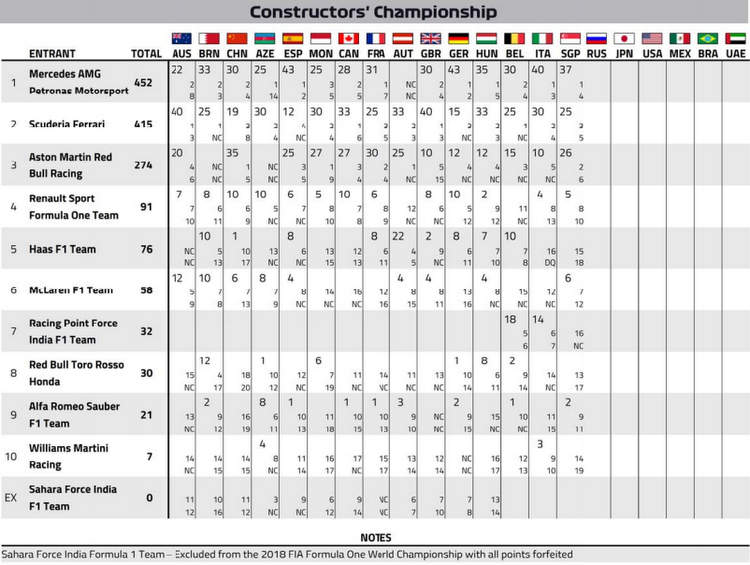