Brown: Creating an environment unique to each driver 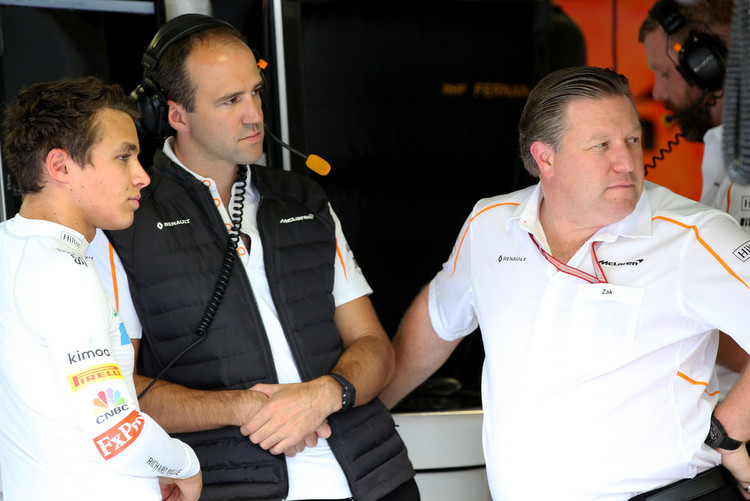 In recent years a move to McLaren has been a bad mistake for young drivers, but in the Zak Brown led era he believes that Fernando Alonso os a better example of how drivers can thrive with the once mighty team.

Kevin Magnussen, Sergio Perez and Stoffel Vandoorne – all promising young drivers when they walked in the door at Woking – did not last wrong. All departing the door with reputations in tatters and forced to resurrect their careers.

But talking to media at a recent event at the team’s HQ, Brown believes he has bucked the trend within the team he now leads, “I think Alonso is a better example of how McLaren operates today. Obviously, when Fernando was here ten years ago that relationship didn’t work.”

“Now here we are, having a pretty poor three years, and I think you’d all say, Fernando, you’ve never seen him with a smile on his face as often as he has had. That’s because we’re letting him operate in a manner in which I think he enjoys the environment and we get the most out of him.”

Brown continued, “I think each driver’s different, some respond to you being very difficult to them, others respond because they need an arm around them. I try and create an environment which is unique to each driver and how they best operate. That’s what we’ve done with Fernando, that’s what we will do with Lando.”

The McLaren team boss is part of Norris’ management team, and clearly sees something special in their new kid on the block, “He’s very mature for his age in the racing environment. He’s quite relaxed, you don’t see him get nervous, I don’t see any anxiety out of him.”

“The way I saw him do free practice on in Monza, his build-up to that was kind of no different than I’d seen in Formula Three. I think he’s got a really good temperament for Formula 1. What that tells me is I don’t think he’ll be rattled easily by adversity which no doubt he will have at some point.”

At the same time Brown is wary of expectations, “If you look at someone like [Charles] Leclerc he was in trouble the first couple of races, maybe because expectations were too high, he made a couple of mistakes and there were stories two races into the championship that maybe he isn’t who we all thought he was. And now it looks like he’s going to Ferrari.”

“So I think we have to be very careful not to set the bar of expectations so high that free practice one in Australia we’ve all come to conclusions about whether [Norris] is the next superstar or not. We need to give him some time to settle in. He’s going to tracks he hasn’t seen before like Australia. He’s going to have some shunts. And so we need to just give him space.

“It’s one of the things Gil de Ferran has been brought in for is kind of human performance of the team and drivers. I think maybe historically we’ve not been great with young drivers because of the environment that we’re in so we’re looking for Gil to make sure we learn from some of the mistakes that we’ve maybe made in the past,” added Brown.

Big Question: Are Zak’s methods the next big thing in driver management?