Is the pressure on Vettel leading to his errors? 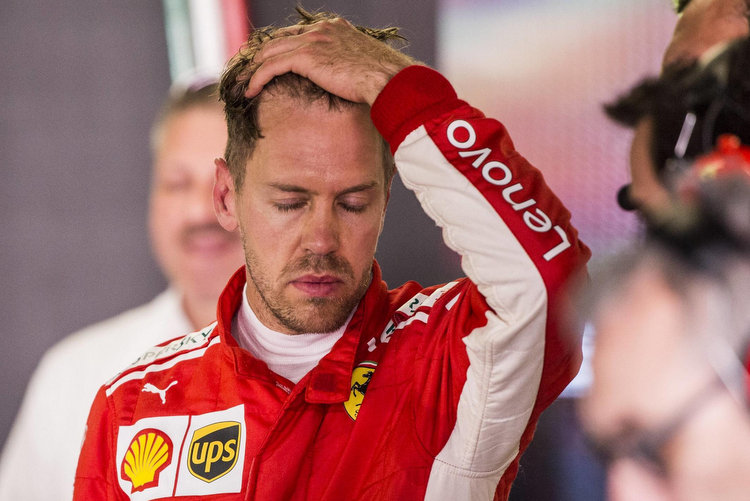 Vettel made some key mistakes last season, allowing rival Lewis Hamilton to win the title, and the Ferrari driver appears to be throwing away his chances this year, too.

Ferrari was quicker than Mercedes all weekend at the Italian Grand Prix, even achieving a front row lockout in qualifying. That set the stage for what should have been Ferrari’s first victory at its home track since 2010 and for Vettel to cut further into Hamilton’s overall lead after winning the previous race in Belgium.

However, an early misjudgment cost Vettel as he hit Hamilton’s Mercedes and briefly lost control, dropping back to 18th. Vettel eventually finished fourth but Hamilton won the race and extended his advantage to 30 points.

Last year, Hamilton publicly spoke about his rival’s apparent vulnerability under pressure as something he could exploit. That might work even better this season, with the intensity ramped up even further.

“The heat is there and it is unavoidable for all of us, for me and him,” Hamilton said. “It is very difficult for people watching who are not naturally in it to feel what we feel. The pressure is at its highest I can ever remember.

Vettel insisted he had not been at fault in the collision but Hamilton pointed out that he and Ferrari driver Kimi Raikkonen engaged in an identical exchange later in the race with both drivers exiting the chicane cleanly.

It was the latest in a series of mistakes by Vettel, who crashed under no pressure while leading the rain-soaked German GP in July and gifted victory and the championship lead to Hamilton.

Vettel and Hamilton are both chasing a fifth F1 title to move level with Argentine great Juan Manuel Fangio and go two behind record-holder Michael Schumacher.

Ferrari has arguably had the better car this season but Hamilton and Mercedes still have the advantage in the drivers’ standings.

“The pressure is so high, all I can do is really focus on trying to deliver every single weekend, which obviously I’m trying to do,” Hamilton said. “I definitely feel I’m extracting everything and more out of the car, but these last races, considering we’ve definitely felt we’ve not had the upper hand, we have been one or two steps behind to then finish ahead by one step, that’s an incredibly proud feeling for everyone in the team.”

Vettel has not been helped by his Ferrari team making errors, too, despite the team’s new-found speed.

In Hungary, Ferrari botched the pit stops of Vettel and Raikkonen, while the decision not to invoke team orders in Monza was criticized as an “own-goal” by the Italian media.

Vettel was furious after Ferrari’s rotation policy in qualifying saw him miss out on pole position after completing his final lap in front of Raikkonen and giving his teammate a vital tow.

Vettel tried to pass Raikkonen right at the start in Sunday’s race but the move was fended off by the Finn.

In contrast, Valtteri Bottas sacrificed himself for the good of the team again, waiting to come in for fresh tires so he could hold up Raikkonen and allow teammate Hamilton to close the gap after the British driver’s pit stop.