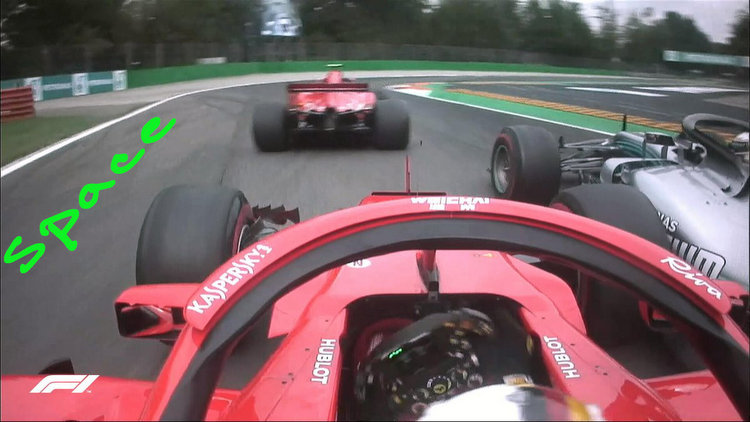 After upsetting the odds and winning the Italian Grand Prix, Mercedes driver Lewis Hamilton brushed off Sebastian Vettel’s first lap spin as a racing incident that worked amid accusations by the Ferrari driver that his rival left him no space.

On the opening lap title contenders, Hamilton and Vettel went side-by-side through the Variante della Roggia (second chicane) with the German coming out second best – video footage (screengrab above) shows the Ferrari, just before spinning, understeering dramatically when beside the Mercedes

Vettel spun and had to rejoin at the back of the field from then went on to limit the damage by finishing fourth, but it was another costly mistake in a championship battle that is slipping away from him and his team.

At the sharp end, Hamilton hunted down Kimi Raikkonen in the other Ferrari, to the audible dismay of the Tifosi the Mercedes driver took the lead on lap 45 of 53 and went on to claim his sixth win of the season, extending his championship lead over Vettel to 30 points with seven rounds remaining.

When asked during the post-race press conference about the incident, Hamilton replied, “It worked! I think it was a racing move. It’s pretty much the same move that Kimi did to me.”

“I don’t really know what to say about that. It was a racing manoeuvre, it’s what we’re supposed to do out there. We’re supposed to be racing. I left him space. I was still on track, so…”

After spinning, Vettel went on the radio immediately and said: “That was silly, where did he want to go.”

To which Hamilton responded, “I’m sure it’s a comment that was done in the heat of the moment. And it’s never a great feeling when you spin and you’re facing the other cars coming the other way. And then you get back up and you start from the back and you have to come through.”

“So, I don’t take anything from it. I know how it is to be in that emotion. I’m sure he really didn’t mean too much by it,” added Hamilton who now leads the championship standings by 30 points from Vettel with seven rounds remaining.