Magnussen: I can’t wait for Alonso to retire, he thinks he’s a god 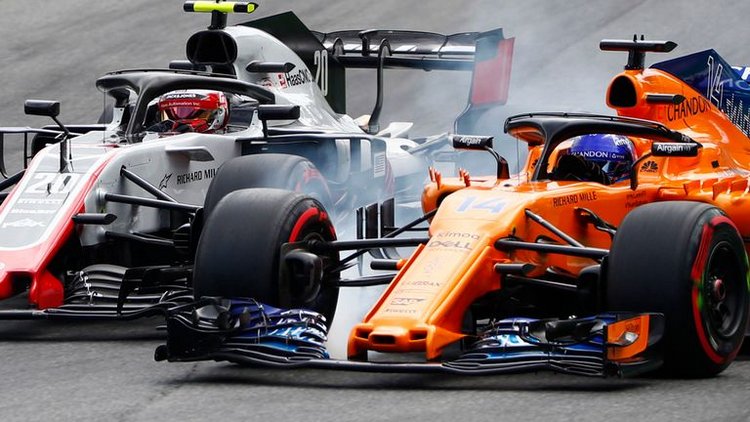 Kevin Magnussen took a mighty swipe at Fernando Alonso after the pair rubbed wheels during a bizarre on-track spat that compromised both drivers during qualifying for the Italian Grand Prix at Monza.

During Q2 on their final flying laps, Alonso and Magnussen entered Turn 1 almost side by side, grappling for the corner as if in race mode and not the qualifying, the pair tripping up as the McLaren tripped up the Haas through the tight right-left sequence. Needless to say, both their laps were compromised by the incident.

Magnussen’s best lap time was good for 11th, but he the was the biggest loser as he had a car that was easily good for the top eight, while Alonso was always going to struggle to make it into Q3 and ended 13th.

Speaking to reporters afterwards, Magnussen spat, “I can’t wait for Alonso to retire, he thinks he’s a god. He overtook me into turn one and ruined both of our laps. We could have been seventh, best of the rest, so that is pretty annoying.”

“The stewards can do something, but I don’t know what they are going to do. It’s not great for me, that’s for sure. We are very fast and should easily be in Q3 but then slower cars ruin it for us, not great. I have a good car, I think we can go forward.”

The FIA race stewards did look at the incident and declared: “The Stewards determined that the incident between Car 14 and Car 20 at turn one did not specifically constitute unnecessary impeding by either driver, notwithstanding the fact that both drivers lost their lap.”

Later, Magnussen added in his qualifying review, “We absolutely should’ve been in Q3 today. Unfortunately, on my last run in Q2 I was overtaken by Alonso, and I couldn’t then get a lap on that second set of tires, which was crucial.”

Alonso, who at one point laughed over the radio while the shenanigans were happening, later gave his version, “At the very last moment, on the inside of the Parabolica, Kevin decided to overtake me and fill the gap between my car and the car in front of me.”

“In Parabolica, you normally launch the out-lap and start accelerating, but we arrived together into Turn 1 and we both lost the lap,” explained the Spaniard.