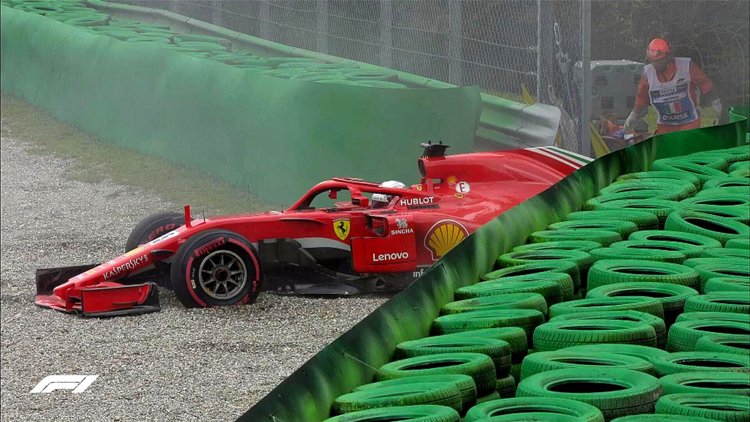 After the wet and miserable morning, it was dry at Monza for the second free practice of the Italian Grand Prix weekend, and with it, times dropped 14 or so seconds with Ferrari driver Sebastian Vettel setting the pace before pranging into the barriers.

After a commanding victory on Sunday in Belgium, Ferrari appear to again have the edge, this time on home soil, as they try to win the grand prix at Monza for the first time since 2010.

Early in the 90-minute session, Marcus Ericsson crashed heavily when the DRS failed on his Sauber and pitched him into the barriers and what unfolded was a very scary crash which was met by audible relief when the Swede emerged from the wreck unscathed.

At the sharp end, Vettel’s best lap time of 1:21.105 was nearly three tenths up on Lewis Hamilton who was only good for third in the Mercedes who would have also noticed the impressive race pace of the Reds in race simulation mode.

Sandwiched between the two world title contenders, second on the timesheets was Kimi Raikkonen a quarter second down on his Ferrari teammate.

Seven-tenths shy of the top time was Mercedes’ Valtteri Bottas in fourth, ahead of the Red Bull pair of Max Verstappen and Daniel Ricciardo in fifth and sixth respectively, albeit over a second down on the benchmark time.

Force India continued their fine vein of form, relishing the high-speed venue, with Esteban Ocon and Sergio Perez easily ‘Best of the Rest’ in seventh and eighth, nevertheless, the gap to the top time was a jaw-dropping 1.8 seconds.

Charles Leclerc was ninth despite spending much time trying to get to the bottom of the DRS failures that also afflicted his car but without the consequences his Sauber teammate Ericsson suffered.

Nico Hulkenberg rounded out the top ten in the Renault.

Apart from Ericsson who did not set a meaningful lap time before his crash, slowest of all and anchored to the bottom of the timing screens with Fernando Alonso 18th and Stoffel Vandoorne 19th, the pair over 2.5 seconds slower than the top time set by Ferrari driver Sebastian Vettel. 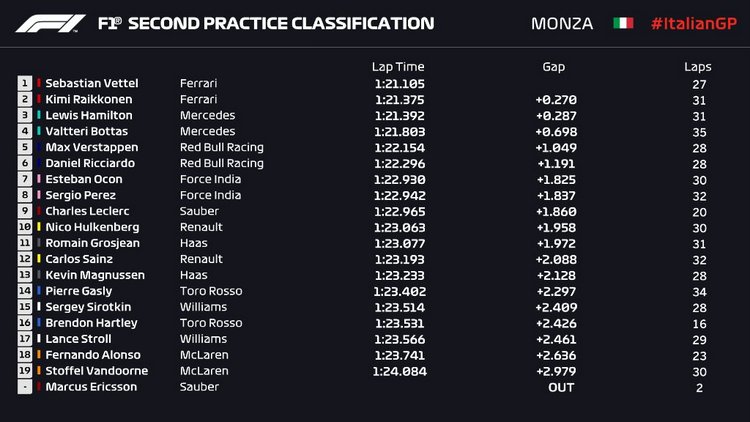