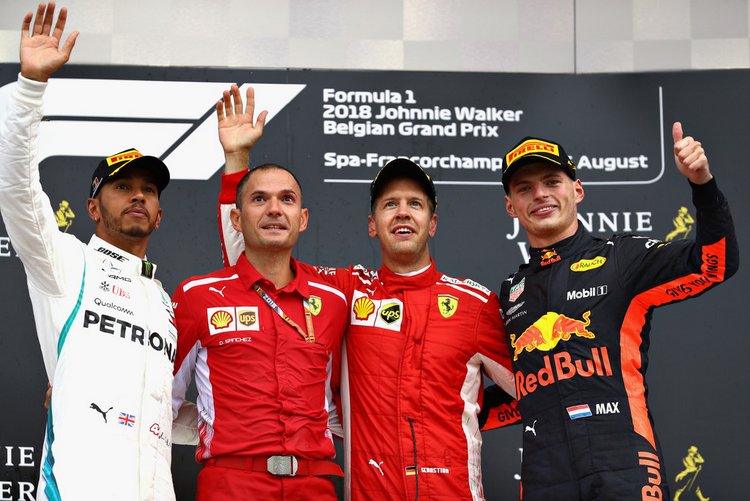 Congratulations Sebastian, your 52nd victory in Formula 1, moving you ahead of the great Alain Prost, and a very important victory. Take us through the first lap, that crazy first lap, up to Les Combes.
Sebastian Vettel: Well… yeah, I mean… more wins than Alain. I think… wow. Sorry. First lap: yeah, I had a great start and then I’m not sure Lewis saw me. He pushed me quite far to the left, but I knew my chance would be later on, up the hill. I think I timed it quite well. Obviously last year I was always ending up short, so yeah, it seems like it was better this year. Obviously we had a little bit less wing. Timing is crucial and I managed that perfectly I thought but then the Force India came as well, so… But as soon as I was ahead I was quite relieved. Obviously with the safety car it was the other way round. So I thought ‘well, I got that done, and now I get the safety car’. But I had a very good re-start; I had a very good exit out of the first corner, kept it clean, it was tricky with the tail wind braking for the first turn. After that a very smooth race. Lewis pushed very hard, especially in the first stint, towards the end he was very fast. In the second stint I could turn everything down a little bit and control the pace. But yeah, a great weekend.

I love your answers; they’re like an essay!
SV: Isn’t that what you asked for!

They’re perfect. Thank you! But then you had the pace after that to just hold him where you needed to…
SV: Yeah, also going through traffic I think I was a bit fortunate; I got them on the straights, so I didn’t lose much time. But I could see he wasn’t really pushing the last 15 laps, so I could relax a little bit more. It was quite tricky. I really enjoyed the race. To get a lot of time on this track is always very nice, in a great car even better, so now obviously looking forward to next week.

Very well done. Lewis, seventh podium in Spa, but not the one you needed today, but still scoring 18 points.
Lewis Hamilton: Yeah, congratulations to Seb. We did everything we could, I did everything I could in the race and I think we ultimately performed quite well this weekend, but he drove past me like I wasn’t even there on the straights. So we’ve got to keep pushing as hard as we can to try to catch up but, you know, that’s all I can say.

You had a go into the final chicane for the safety car restart. You thought you might be able to sneak through there?
LH: I think I could have but again he would have sailed past me on the straight. They’ve got a few trick things going on in the car. I did what I could, we did what we could and we’ve just got to keep working.

Monza coming up, so their straight-line speed will be pretty handy there too.
LH: Yup.

Well, we’ll see what happens next weekend. Max, congratulations. You have an awful lot of fans in the grandstands but it looked a pretty lonely race on the track?
Max Verstappen: Yeah, especially after the first 10 to 12 laps, but initially it was a bit chaotic and I had to get past a few cars, but we stayed out of trouble and after that we just did our own race and of course very happy to be on the podium here.

This track hasn’t always been kind to you but today it worked really well. That was the best you could achieve with the pace you’ve got.
MV: Yeah, before we had been a bit unlucky, it happens sometimes, but I’m very happy with today.

Lewis, just picking up on something you said after the race, you referred to Sebastian and Ferrari’s straight-line speed at the start. You mentioned there that it didn’t seem like you were surprised to have him attack you. Are you surprised by the extent of Ferrari’s engine performance with the latest upgrade? And how do you think they’ve achieved that? We’ve heard you mention them maybe doing engine tricks. Do you think they’re just outsmarting Mercedes at the moment?
LH: Well, we came here with a pretty good upgrade and, I mean, generally, every time we do bring an upgrade they bring a bigger one. But no, we knew they were quick on the straights. They were quicker, particularly in qualifying in the last sector. We’ve known for the last four races or so that they’ve had some things on their car that’s enabled them to be quicker on the straights and yeah, we’ve just got to work harder, I guess.

Just to follow up for both of you, Lewis and Seb, it looked like in the middle sector the Mercedes was much quicker in the qualifying session. What do you both think? Is it more due to the power or the aerodynamic set-up that you have less drag but more downforce? In the first sector and last sector is it only do to the power that you’re losing out on the straights?
LH: It’s just power. They’re able to deploy more, somehow, than us, from Turn One to Eau Rouge, and then it carries on down the straight. And it’s the same down the back straight. I’m not really sure how but that’s how they are.

And Seb, is it just engine performance?
SV: Well, I hope so. I hope we have more power. That’s what we’re working for. If that’s the case then obviously well done to our engine guys. I think we’ve been making progress, especially the last two years, so, that’s good news. I think this feels pretty straightforward. We ran a little bit less wing, were faster in sector one, sector three and sector two was a little bit slower. But I wouldn’t disagree that this year in terms of power we are a lot closer than we were last year. I think last year we didn’t have a chance here, despite maybe running less wing – or more wing. It’s good to see that we’re making progress.

Lewis, when you say ‘tricks’ do you mean, do you think that Ferrari are bending the rules slightly? Or do you think it’s all legal?
LH: No, we all have trick things on our cars. Trick is just a word for something special, I guess.

Question for Max. Was there extra pressure on you this weekend. It’s your home race, a lot of Dutch fans. Can you tell me something about the pressure? You tried yesterday with the rain to gamble all or nothing and today you delivered by getting the podium. How relieved are you? First how you dealt with the pressure and second how relieved you are delivering to the fans by coming third?
MV: There was no extra pressure. I just enjoy driving here at Spa in general. It has nothing to do with the fans, they just give you extra motivation and I just like to see it next to the track: that much orange. I think it shouldn’t give you extra pressure. But, yeah, today was a good recovery after yesterday when we were unlucky in qualifying. So, of course, happy to be on the podium here. Of course, it was also great to see in the last lap, all the fans cheering you on. So really happy with that.

Lewis, we saw an important advantage of Ferrari here today during the race. Do you think it’s related to the correct risks of Spa Francorchamps and next weekend Monza? And when we have another circuit like Mexico or Austin, maybe it can be less than we saw here?
LH: No, I think they seem to have it where there are straights. You’ve got Mexico, long straights, they will have the advantage there. They generally have the advantage at places like Singapore. The next race, with this kind of performance they have on straights, we might struggle to match them there. We gave it everything we had today. We were, generally, often quicker in the middle sector in qualifying but for some reason, I think in the race even then, I couldn’t keep up. For them to pull over a second gap, that’s some serious pace they had today so we’ve just got to keep working hard and keep pushing.

Lewis, just reading into what you’re saying to your answers with regards to the trick things, will you or Mercedes be speaking to the FIA…
LH: I’m not saying that there’s anything illegal on. I’m just saying we all have something trick. There’s probably something trick on… Trick is just something that helps you bring that extra bit of performance. That’s all I mean. I don’t mean anything to it so please don’t read into it and please don’t twist my words and say that I say they’re doing anything illegal because they’re not. They just outperformed us today and we’ve got to work harder, but there are things that they have on the car that we might not have on the car and vice versa and we’ve got to try and find out what and improve on that. That’s it.

Lewis and Sebastian, obviously the restart presented different challenges for the pair of you: Lewis’s chance of attack, Seb you needed to worry about defending. Can you just talk us through the sort of approach mentally to that restart and then how you handled it, obviously into La Source and down the Kemmel straight?
SV: Yeah, I think it was one of my worst restarts initially to surprise Lewis. I think he was sharp and obviously I knew that I had nothing to fear because the safety car lane or where the race basically restarts is not braking for turn 18. Also, when I realised the initial bit that it’s not great, also caught some wheelspin that I didn’t want, but I didn’t want to slow down again to then surprise him again or get a second chance because I don’t think that’s fair. Then I focused on the last corner, the last pair and that worked really well plus turn one where we had some tail wind the whole race so I was making sure I knew where the wind was going and again, got it really right and had a great exit and once I was told the gap, which was around 0.9s exit of turn one, I knew that I should be safe but then you never know with a little bit of headwind up that long straight and obviously looked in the mirror, tried to see him when I could and saw that he wasn’t a threat so I was happy when I went into turn five and stayed ahead.
LH: It started out well. I probably could have gone up the inside into the last corner, maybe, just about, but again, they would just overtake us on the straight so I held back and tried to stay close but he just pulled away out of the last corner and then through turn one they’ve been quicker than us all weekend there and out of it so by the time I came out of turn one, he was quite far ahead.

Max, is this result also proof for you that in the last eight races there are still things possible, despite the difficult split with Renault in which you are involved?
MV: We just try to make the best of it ‘til the end of the race. Hopefully on a street circuit we can be closer or at least fight them. Yeah, let’s see.