Inside Line: Formula 1.5 the other championship 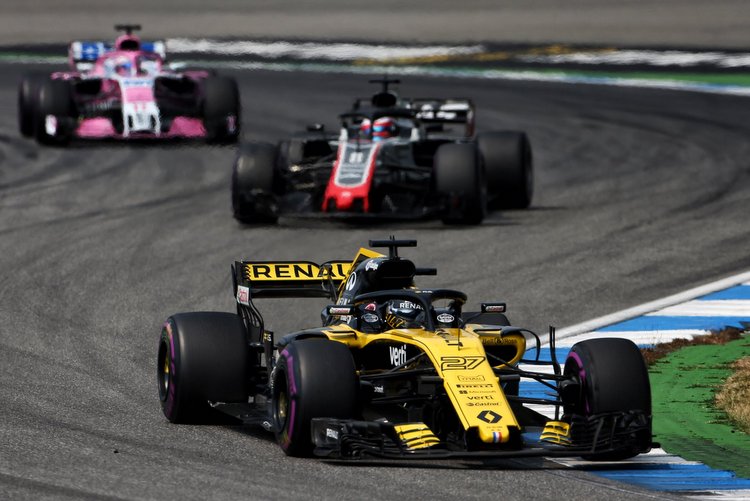 Inspired by a Reddit post I delved into the other Formula 1 Championship that is happening before our eyes, Formula 1.5 a contest for the midfield teams – a world with no Mercedes, Ferrari and Red Bull – a series within a series.

Formula 1 is currently a “two-class” championship, the gap between the Big Three and the Others is huge and I believe the gulf is widening each year.

I venture anything up to two seconds per lap is the difference between the fastest of the heavy hitters and the best of the minnows, the deficit not only notable in qualifying when everything is dialled up but also in race mode.

So with some Excel trickery (thank you Joao Gouveia) it was interesting to eliminate the six drivers, of the top three teams, from the equation and calculate the championship with their absence, including the 14 remaining drivers in our project.

Drum roll… in this year’s edition of Formula 1.5, Nico Hulkenberg rules the roost with eight top-three finishes including four victories in the process!

Three retirements due to Renault’s flaky reliability have kept the chasing pack in touch, but other than that the Hulk is top gun in the midpack and only this team can prevent him walking away with the Best of the Rest crown at the end of the season.

Along with Carlos Sainz in the sister car, the French outfit (the only works team in this exercise) lead the F1.5 constructors’ championship by a healthy margin.

Sainz has been consistent with four-second place finishes and a third, however top spot on the podium still eludes him, he is remains in the Best of the Rest title hunt.

Hunter in chief is Kevin Magnussen in the Haas who has been consistently scoring points, he has two wins to his credit and only one DNF which he suffered at the season opener. He lies second on the points table.

The Dane has started from pole four times, more than any other driver in F1.5 this season so far and with the Haas package on song he will fancy his chances of claiming the title.

Fernando Alonso started the season with a victory, but as McLaren struggled to find the sweet-spot the Spaniard has been forced to wrestle his car to four more podiums, but retirements in Monaco and Canada have cost him. He is fourth in the standings.

Other winners include Force India’s Esteban Ocon who won in Monaco and notwithstanding three DNFs has had a strong run since then while Sergio Perez, winner of the Azerbaijan Grand Prix, has only one DNF but is 10 points adrift of his teammate. They are fifth and sixth respectively.

Incident prone Romain Grosjean made good of his Haas by claiming victory in Austria, but his waywardness has cost him dear, he has scored 73 points less than teammate Magnussen in the dozen races.

Red Bull-bound Pierre Gasly has enjoyed victory on two occasions, a famous drive in Monaco and last time out in Hungary he won by a comfortable margin of eight seconds, but three retirements have not helped his cause.

Despite this, the young Frenchman leads his teammate Brendon Hartley by 61 points, the New Zealander’s best result a couple of sixth places in the last two races before the summer break. This coupled to three DNFs leaves Hartley down in 12th.

In the constructors’ title race Renault enjoy a handy lead of 81 points over Haas with Force India hot on their heels. The American team need both their drivers to be scoring points regularly if they seriously want to challenge for Best of the Rest honour.

McLaren are fourth ahead of Toro Rosso in fifth, Sauber sixth and Williams way out of touch, anchored to the foot of the table. Their drivers Sergey Sirotkin and Lance Stroll scoring points only 11 times in 24 opportunities thanks to a woeful car at their disposal.

Although some F1.5 races may have been closer than the real F1 races, the intensity of competition among the minnows is not fiercer or closer than expected.

Hence the myth that racing is more intense in the midfield is now bust. Teams and drivers may be closer in one lap qualy mode, but when a race plays out there is a tendency for drivers in the midfield to spread out more so than when the Red Bull, Ferrari and Mercedes chaps are in the mix.

When analysing Hulkenberg’s haul of 169 points in 12 races with Lewis Hamilton’s real-world score of 213 points it is evident that Mercedes and their British driver are doing a better job than the German and Renault.

Interestingly the points difference at the top is very similar in F1 and F1.5, Hamilton leading Vettel by 24 points in the real world, while Hulkenberg leads Magnussen by 22 points in our exercise.

On the other hand, the constructors’ battle is far tighter between Ferrari and Mercedes than our Renault versus Haas duel.

So as we head into the final run of nine championship races, Renault is the B-team to beat and Hulkenberg is the driver to beat in the midfield.

Magnussen is the man on the move who with the better car in his Haas than his rivals. Sainz could do with a victory in the bottom flight because his consistency has kept him in the F1.5 title hunt.

Alonso has an outside chance of challenging for the accolade, but McLaren need to find some performance to keep the Spaniard returning to the podium before his F1 farewell in Abu Dhabi.

Dark horses in the midpack are the Force India duo, they are suffering amid the team’s financial woes, but if in this latter half of the season they can extract the type of performance from their package that they enjoyed last year, then they have a chance with Ocon and Perez fighting in their corner. 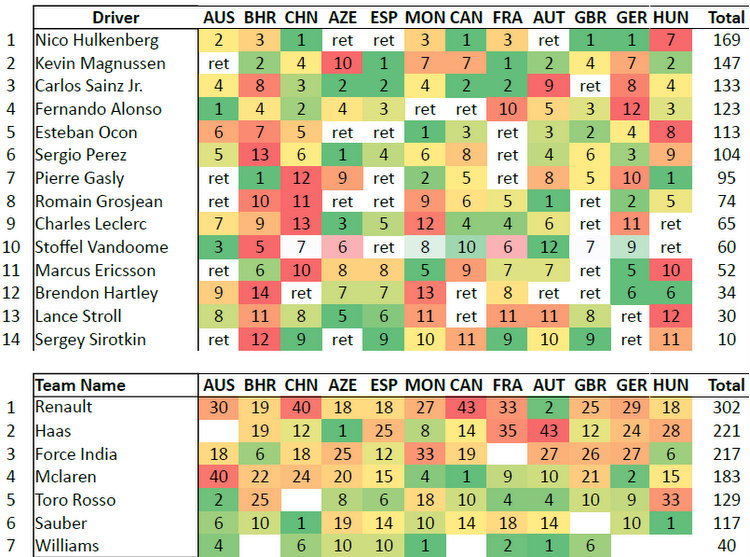