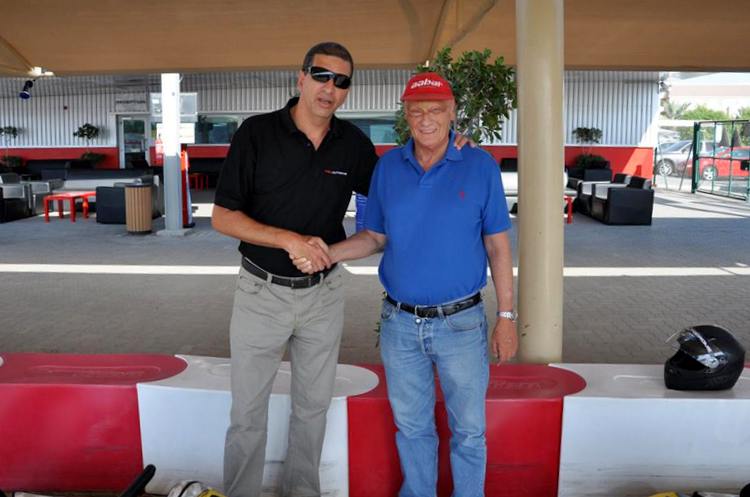 Like the entire Formula 1 world, I am shocked that our legend Niki Lauda is suffering through a lung transplant, in the wake of this horrible news, memories of an afternoon I spent with him at Dubai Autodrome flooded back and I feel it is appropriate to relive the tale for our readers.

It was late October back in 2013, at the time I was Communications Manager at Dubai Autodrome and I got word from Kartdrome manager David Bright that Niki Lauda, Adrian Newey and his son Harrison Newey would be visiting the venue.

They arrived, a few days before the Abu Dhabi Grand Prix that year with Lauda driving the Newey’s to the Kartdrome.

I, of course, made sure I was there. My ‘dealings’ with Niki had been as a photographer covering the South African Grand Prix in the early eighties. I still have many photos of him from those years.

By the time I hit Europe to do the F1 circuit for Associated Press and working for Jeff Hutchinson’s IPA in the late eighties, Niki was off the F1 scene completely as he focussed on his Lauda Air business interest.

Back to that day at the Kartdrome… Initially, Niki was not interested in doing laps in a kart, but after some lengthy persuasion, he agreed to go on track but on his conditions…

The Dubai Kartdrome facility hosts a very effective and popular Arrive & Drive leisure karting programme on a daily basis, but to run in the 15-minute sessions drivers are obliged to wear race suits and gloves.

This is not negotiable and the venue manager David, a no-nonsense chap you do not want to mess with, runs a tight and efficient operation which bankrolls the whole Autodrome loss-making operation and has his strict, unbreakable, rules which are: no suit, no drive.

I think for the first time ever, on that day, David a real racer at heart dropped the ‘unbreakable’ rule so that Niki – who outright refused to wear a race suit – could go out on track. I have this everlasting vision of Niki in a polo shirt and jeans whizzing around the track to the amazement of staff and bystanders.

Honestly, I do not recall the lap times he set, but Niki did go around and did do laps which was pretty game considering his stature.

It is worth noting, guys like Niki (and I am sure many others) have two personas: the public one and the private one – I got a good dose of the latter that makes me wish I had a secret recorder to relive the conversation and banter.

After his run in the kart, I asked him how it was and he mumbled something like: “Fucken things are too slow!”

At the time I was running GrandPrix247 as a hobby, and the big story was whether Lewis Hamilton would extend with the team and Niki was in the middle of negotiating with their star driver. It was a big talking point at the time.

When I queried if Lewis had signed Niki said, “We’ve been talking to him and of course he will sign. It’s just about the money and he is just playing the usual games and we are also. He will sign. Lewis will drive at Mercedes until his career ends.”

Indeed Lewis did sign shortly after and remains with the team, his latest contract ensures that he will probably be with them until the end of his career.

On that day in October, the first thing that impressed me mightily was that in private mode Niki swears like a trooper which caught me off-guard, but it something I relate to because in South African-speak a sentence is incomplete with without a juicy expletive or two, something they never understood in Dubai!

With Niki the colourful language flowed and I relished every word. We got chatting as we watched the Neweys and entourage do the karting thing from the trackside.

At one stage I told him that I witnessed him race and win at the 1977 South African Grand Prix at Kyalami.

At which point he took up the story: “That was my first win after my accident in ’76. It was supposed to be special but Tom [Pryce] was killed in that race when that marshall ran across the track. Fucking horrible.”

“You know when I stopped in parc ferme the mechanics found the roll-bar of the Tom’s Shadow stuck under the sidepod of my car. It was there for 50 laps!” recalled Lauda who was driving for Ferrari at the time

We chatted on about this and that – I wish I could remember everything. And because I was a comms guy, on his side of the fence, not a reporter, Niki was so raw and honest which really struck a chord with me.

At the time in one of the Dubai Autodrome pit garages, we had the 1977 McLaren M26 of James Hunt, it was for sale and the owners were storing the car at our venue.

When I told Niki it was there he insisted on seeing it. So we left the Neweys to battle one another in the karts, hopped into my car and I drove him to see the last McLaren James drove in F1.

While driving the 2-3 minutes to the pit garages I remember distinctly, and with a smile, when he hopped into the car he asked: “What is this car?”
I said: “It’s a Lexus IS300.”
He said: “This is shit, you must buy a Mercedes they are bulletproof.”
Me thinks: “Sure Niki!”

When we got to Hunt’s car, just me and him in a dimly lit garage, he circled the car for several minutes. Really studying it before, without a word, he lowered himself into the cockpit where he stayed for another few minutes contemplating the ‘office James worked in” during the 1977 F1 world championship, which Niki won after losing to the Englishman a year earlier in that incredibly dramatic 1976 season.

As he climbed out of the Marlboro liveried M26 he said with a half smile, “Fucking James was so bloody tall, that’s why he walked like a hunchback so he could talk to us short-shit guys.”

In retrospect, I was fortunate to have spent a couple of hours with the great man. There were no airs and graces, just a straight-forward guy who called it like he saw it. One of us.

At the time it was all part of my job at the Autodrome where I got to meet and chat with numerous legends of the sport. But none let their guard down like Niki did that day. Maybe I got him on a good day, or maybe we just clicked because of our common use of piquant vocabulary.

Now, with the terrible news of his ill-health, these memories are flooding back and I will always cherish the fact that for a very brief moment in time I got to sample the real Niki and not the corporate guy that is his other persona.

Even in his role as Merc F1 chairman he always calls it as he sees it, caring little for political correctness… minus the cussing of course!

I for one (and I am sure I speak for every F1 fan) want him back in good health. If he never returns to the paddock it will be a huge and sad loss, but if it means he will live longer by being absent then so be it.

Formula 1 without Niki will forever be the poorer and perhaps now, those who belittled his comments will realise how fortunate we have been to have had this great Champion with us for so long after his glory years.

May the real fucking force be with you Niki! 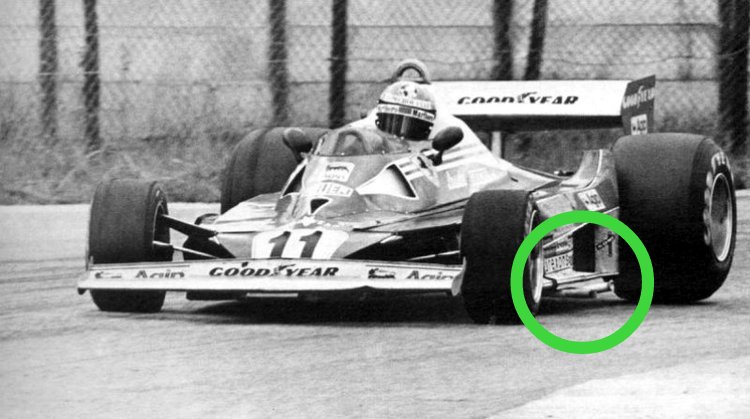