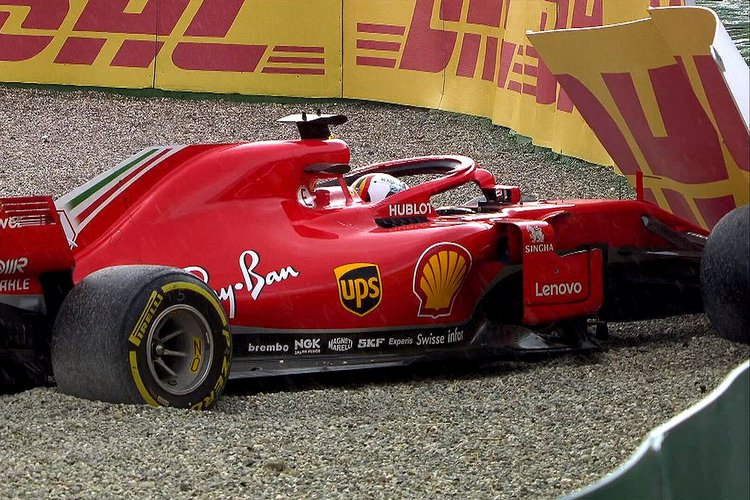 Ferrari driver Sebastian Vettel crashed out of the German Grand Prix after enjoying a commanding lead until rain came down triggering chaos on track, ending the local hero’s dream of winning at Hockenheim.

Vettel was leading the race comfortably when the rain started top come down, rendering certain parts of the track wet and slippery.

As a result at Turn 12 in the stadium section, he hit a wet patch when he went on the brakes and slithered off, crunching the wall and beaching his car in the process.

The Geman spoke to reporters afterwards, “I don’t think it was a huge mistake. It was a huge impact on the race because we retired there but it’s not like tonight I’ll have difficulty falling asleep because of what I’ve done wrong.”

“I think it’s disappointing because up to that point everything was sweet, but we didn’t need the rain. It was just one of those moments. It was my mistake so apologies to the team they did everything right.”

“I had it in my hands – small mistake, big disappointment,” added Vettel who arrived at Hockenheim ahead in the championship but now trails race winner Lewis Hamilton by 17 points heading to the Hungarian Grand Prix.

The DNF is a blow to the German’s title hopes and may well come back to haunt him when the maths is done at the end of the season.