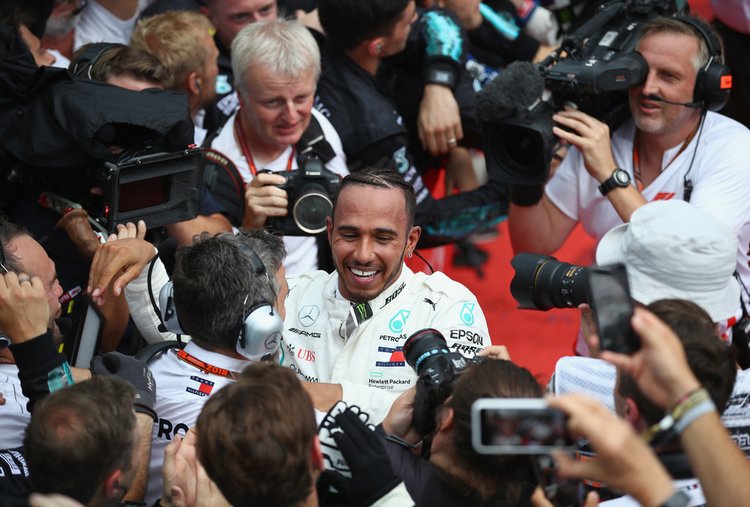 Mercedes driver Lewis Hamilton was reprimanded by FIA race stewards after celebrating victory at the German Grand Prix, after investigating a late-race incident in which he drove his Mercedes off track to abort a pit stop late in the race.

Thus Hamilton’s victory, which until then was threatened, remains because the sanction imposed did not include any penalty that would have demoted him down the order.

The stewards who include former F1 driver Mika Salo summoned Hamilton after the post-race press conference for “Alleged breach of Appendix L Chapter IV Article 4 (d) of the FIA International Sporting Code, car 44 crossed the line separating the pit entry and the track.”

The incident happened on lap 53, under safety car conditions, Hamilton was called into the pits by his race engineer Pete Bonnington, but as he peeled in he spotted that Raikkonen had not pitted and the Mercedes driver followed suit by cutting across the grass between pit lane entry and race track.

Hamilton looks to come into the pits…

But instead stays out, and leads under Safety Car#GermanGP 🇩🇪 #F1 pic.twitter.com/lHBfioSng8

With team trucks heading out the gates at Hockenheim on Sunday evening stewards delivered their verdict:

“The Stewards reviewed video and audio evidence, heard from the driver of car 44 (Lewis Hamilton) and the team representative. It was clear that there was an infringement of the above mentioned rule – the driver clearly crossed the line separating the pit entry from the track.”

“In deciding on the penalty for the infringement, we took into account the following mitigating factors:

“Taking all of the above into account, including considering previous infringements of the above rule, we are of the opinion that a reprimand would be the appropriate penalty for the said infringement on this occasion.”

UPDATE: @LewisHamilton handed a reprimand by the stewards, he keeps his #GermanGP victory pic.twitter.com/b6UN0FFxEW

“The reason I was mentioning it was because there were times when you do the opposite to the car in front and I really felt that this was a chance to do the opposite to Kimi and gain ground on the road. So that’s why I questioned it an ultimately it turned out to be the right thing.”

FIA race director Charlie Whiting, who does not sit on the stewards’ panel, explained the delay in investigating the incident, “It just takes a little bit of time to make sure that if you’re going to call a team that you have a good reason for calling them.”

“Obviously we wanted to wait until after the race to have a look at it because we were getting quite close to the end of it and then with all the rain and the thunderstorms and everything like that, by the time everything had calmed down, had a good look at it and the stewards decided that they should, in fact, discuss it with the team,” added Whiting.

Big Question: Did the penalty befit the ‘crime’ that Lewis committed?