Grosjean out of control and in the wars again 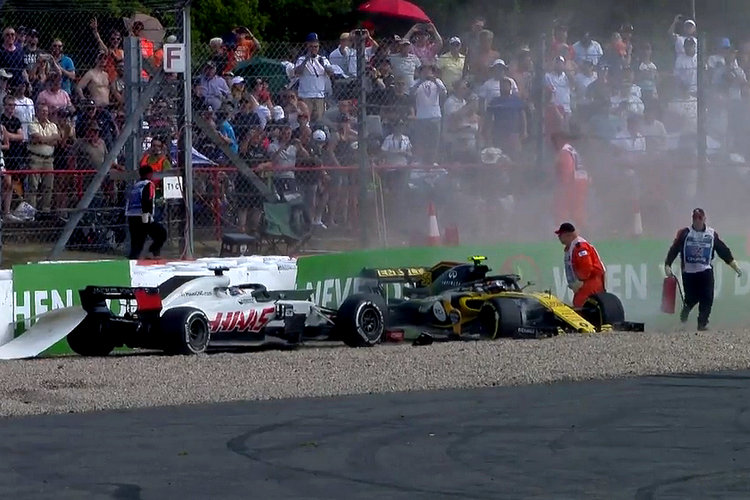 The pair were racing for position, with Grosjean apparently faster but his impatience got the better of him as he kept it pointed ever-narrowing gap through flat-out Copse, he locked up and was seen (through the onboards) correcting the slide before the collision.

“The drivers gave clear evidence that agreed. Car 55 had a run on the outside of Car 8 going into the very fast Turn 9. While the driver of car 55 did slightly tighten his line towards the apex, the drivers agreed that this was not the entire reason for the incident.”

“The driver of Car 8 explained that he had braked, where he would not normally brake, at the entry of the turn to avoid an incident, but as soon as his front wing was in the turnbulence from Car 55 he had a slight understeer and as the cars were very close they made contact and subsequently both cars crashed.”

“The drivers agreed that it was a racing incident and the Stewards determined that neither was wholy or predominantly at fault and took No Further Action.”

Grosjean, who famously blamed Marcus Ericsson for his silly mistake during the race in Baku, this time reported over the team radio: “He just turned into me, mate.”

But later toned it down, “I haven’t seen much. Obviously, Carlos can say I didn’t leave him enough room, I can say he didn’t leave me enough room. It’s a shame it finished like that. It was still possible to score points.”

Sainz simply called it as the stewards saw it with Grosjean present, “I think it could have been avoided – but this is Formula 1. We gave each other just enough room and I think he lost the car.”

“I was risking to try and overtake Romain, made a move around the outside into Copse and I think he just lost a bit the car on entry and we just tangled,” explained the Spaniard.

On the opening lap of the race, the Frenchman once labelled the first-lap-nutcase by Mark Webber, clattered into his teammate Magnussen who was not pleased with his teammate.

Magnussen recovered to finish ninth on a day when a double points finish was a real possibility for the American outfit.

Team principal Guenther Steiner confirmed, “Romain apologised to Kevin, I guess he waited with his braking a little bit too long. This is obviously not acceptable because we keep on losing points while having a good car.”

Despite the apology, Grosjean said in the post-race Haas team press release: “At the beginning of the race with Kevin, I think it was a mistake from both of us. It shouldn’t happen, so we need to work on that to ensure it doesn’t happy anymore.”

A week ago in Austria, Grosjean scored the first points of his season which has been marred by mistakes and track antics not expected of a driver of his experience and stature.

The cost of ‘bent metal’ at Haas must be adding up and mostly inflicted by the wayward Frenchman who is surely on his way out of Formula 1 if he does not change his ways dramatically and rapidly, with Ferrari reportedly happy to snap up his seat for their protege Antonio Giovinazzi.

Big Question: Is it time for Romain to depart Formula 1?