Alonso: Zak is a good leader for the future at McLaren 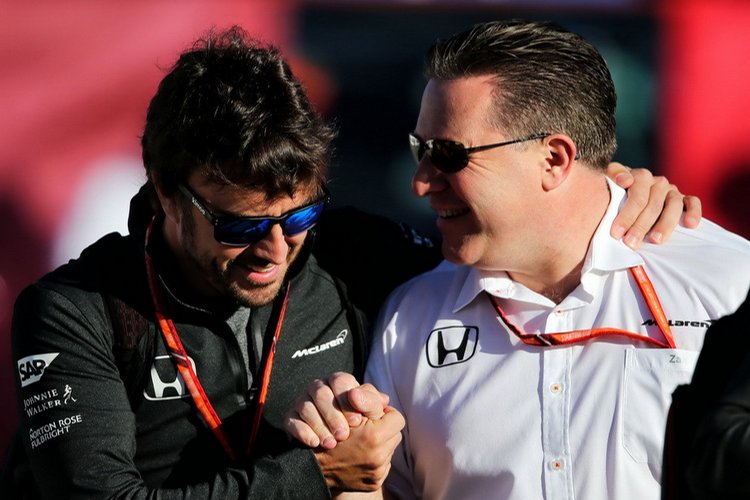 Amid the headline-grabbing upheaval at McLaren, their star driver Fernando Alonso is backing under pressure Zak Brown to lead the team back to the top of the grid despite the mid-season departure of heavy hitters Tim Goss and Eric Boullier.

It would be fair to say that Alonso was one of the main reasons McLaren were persuaded to ditch a lucrative, albeit problem packed, Honda partnership and opt for the customer engine deal they now have with Honda.

It seemed a good idea at the time (to them only?) but in retrospect, it was delusion thinking they would be challenging fellow Renault-powered Red Bull.

McLaren were quickly exposed as the team concocted the toothless McLaren MCL33 and although results have been better than last year, they are nowhere near preseason victory boasts.

Sentiment in the paddock is that Alonso is pulling the strings at Woking, but the Spanish double world champion denied he was calling the shots at McLaren, despite the fact that his long-time Ferrari race engineer Andrea Stella was promoted to performance director and Gil de Ferran, an Indy 500 winner with whom Alonso worked at Indianapolis last year, brought in as sporting director.

But Alonso told Reuters, “I just drive the cars. With Zak obviously, we have a very close relationship even if it’s a short time that we met… He’s a racer, he understands racing commitment and spirit and I think he’s going to be a good leader for the future at McLaren.”

Brown and Alonso would have met over the years in the Formula 1 paddock, but they became firmly entwined when the American marketing guru was appointed to lead the team in the wake of Ron Dennis’ downfall a couple of years ago.

Since then, as a full-time Formula 1 driver for the once mighty team, Alonso was given the kind of freedoms not seen in Formula 1 for decades, fervently backed by his latest boss.

Brown was instrumental in the Spaniard’s well publicised Indy 500 foray last year and did not protest when the double world champion inked a WEC deal with Toyota which will have him on in their colours alternating with the orange of McLaren when on F1 duty.

All this amid growing dissent within the walls of the MTC followed by reports dissecting the team during this time of crisis.

Alonso explained to reporters at Le Mans last month, “Zak is a man with a bigger vision than other team principals or bosses that I have had He sees motorsport differently. He is also adapting this vision to McLaren which is not just a Formula 1 team, it’s part of motoring.”

“He is a true racer,” added Alonso.

Big Question: Is Brown the right man to lead McLaren back to the top?