Marko: The Lederhosen worked for the first time! 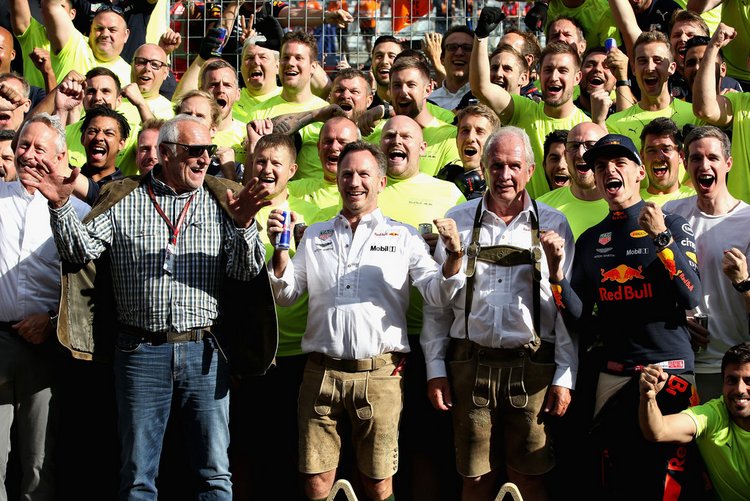 Max Verstappen’s victory at the Austrian Grand Prix has triggered much praise from his Red Bull bosses, team principal Christian Horner and consultant Helmut Marko were both over the moon with their driver who delivered the team’s first ever victory on ‘home’ soil.

Speaking after Verstappen’s unexpected triumph at Red Bull Ring, team chief Christian Horner said, “Blistering wasn’t predicted coming into the race, but it [was] hot and the load in the last two right corners, it is massive the amount of energy these tyres have to take up around there.”

“So that is where Max was really cute. He backed off through those right-handers and made his time in the other parts of the circuit. A really, really mature drive.”

“He was keeping the rear-left cooler than the rear right, and the rear-left here is the one that takes all the load. He was constantly asking for information and managing those tyres and that is why they didn’t blister up. A very, very mature drive for him.”

Winning at home, where Mercedes had dominated for the previous four seasons, made victory all that much sweeter as Horner explained, “It’s huge. All the races have the same points, but some mean a bit more than others.”

“Dietrich Mateschitz puts so much into Formula 1, a grand prix – you’ve seen the organisation here this weekend and the facilities – and two grand prix teams.

“To win here in Austria with him in attendance, because he doesn’t come to many races, it’s fantastic, and for the Dutch fans as well.”

“There were 20,000 Dutch fans here this weekend. They came all the way here last year and saw Max make it through one corner. This year they came back and they got a victory,” observed Horner.

Marko summed up the afternoon by starting with a joke, “The Lederhosen worked for the first time!”

Before adding, “The rising temperatures helped us on the day. Max drove an incredible race. He managed his pace by increasing it when required and reeled it in when called for as he worked to save the car and tyres.”

In the sister car, Daniel Ricciardo retired with a power unit issue on lap 53, at which point Verstappen turned down the power until he needed it again late in the race with Kimi Raikkonen hunting him down in the Ferrari.

“As it got warmer and warmer, we knew that Mercedes might be in trouble. Max gave his critics of recent the perfect answer. A victory at our home grand prix is something special and with it comes special emotions,” acknowledged Marko.