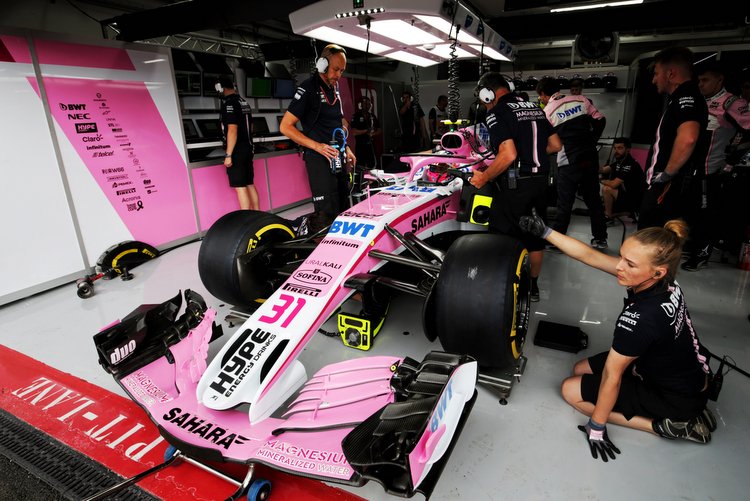 In many ways, Red Bull Ring – venue of the Austrian Grand Prix – shares many characteristics with Paul Ricard, requiring a blend of good straight-line speed, and both low and high-speed cornering performance. In addition, the asphalt is relatively new.

The altitude of the circuit (approximately 800m above sea level) brings unique problems, with the turbochargers having to work harder to deliver the same power output from the drivetrain, while the lower density air also impacts cooling performance, both for the power unit/gearbox and the brakes. 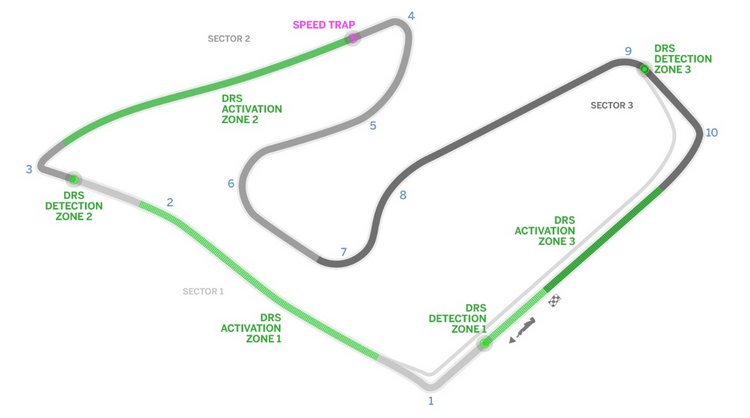 Teams will tend to run a higher downforce set-up, with the altitude favouring such a configuration, although the presence of three relatively long straights may require those with lower power, and/or poor Aerodynamic efficiency, to sacrifice cornering speed more than others. The addition of a further DRS zone will also favour more downforce to be run, since the extra drag can be mitigated for along the straights in qualifying, yet result in improved cornering performance. Running higher downforce will also help keep the rear tyres under control during a race stint, particularly problematic for Renault in 2017.

As mentioned above, a car with good all-round characteristics should fare well in Austria. Traction is very important from Turns 1, 3 and 4, while Aerodynamic performance dominates the final sector. Braking stability is also of key importance, and this is one of the areas in which Red Bull will hope to overcome its straightline speed deficit to Mercedes and Ferrari.

Turn 1 will be critical in order to set-up any overtaking opportunities into Turn 3, which will most likely be the desired place to pass other cars with the addition of a third DRS zone along this straight. Turn 9 is one of the most difficult corners on the track, taken at very high speed, but with car-damaging kerbs if a driver runs too wide; this tests the outright Aerodynamic performance of a car, with any oversteer here likely to severely dent a driver’s confidence. 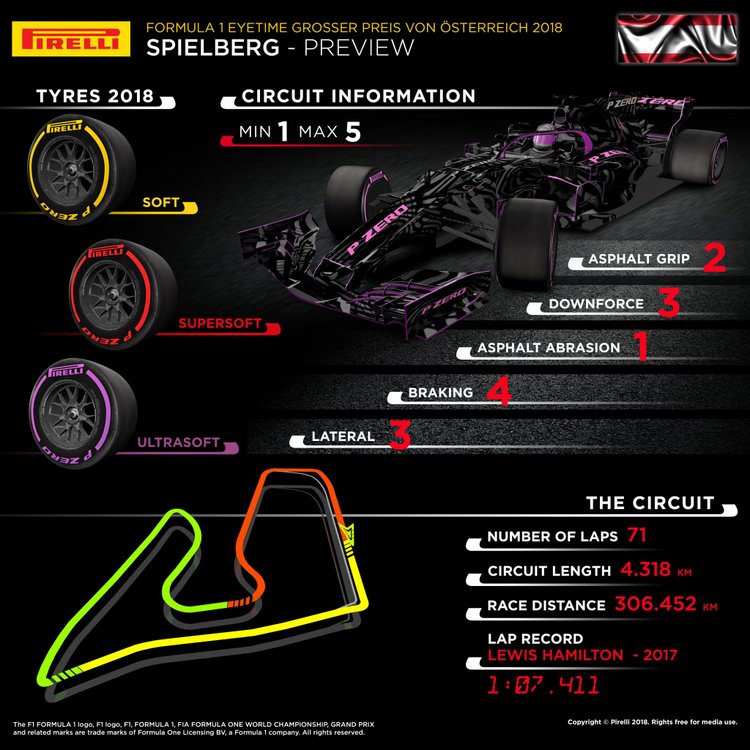 The tyre compounds nominated for this year’s Austrian GP are the same as those taken to the 2017 edition of the race, although it should be noted that Pirelli has stated that the 2018 compounds are a step softer than last year.

Whether this has actually been achieved is up for debate, with races where the tyre allocation has been the same as last year seeing a very similar strategy and indeed, drivers have reported that there is very little difference between these three compounds at certain races.

For this race, Pirelli will return to a standard tread depth, before the tyre with a 0.4mm tread depth reduction returns for Silverstone, the last scheduled appearance of this variant, for the moment at least.

In 2017, all three tyre compounds were very consistent and good race tyres. The favoured strategy was a one-stop using the UltraSoft and SuperSoft tyres, and there is no reason to expect the number of stops to be any different this year.

Indeed, the same tyre compounds may be used, although if degradation is greater, teams will favour the SuperSoft and Soft tyres more than the UltraSoft. The fact that selections are heavily weighted towards the UltraSoft tyres does suggest a fairly straightforward one-stop race.

The third DRS zone will, however, encourage teams to make an extra stop if late race safety cars appear, for instance.

The aforementioned inclusion of a third DRS zone, for the third time this season, should aid overtaking significantly, on a track where good racing was already present. The key, as was the case at Paul Ricard, is to stay as close as possible to the car in front from Turn 5 onwards, something which is very difficult given the medium-high speed nature of the corners together with their length, in order to set-up a pass on the other half of the circuit.

There is a high chance of showers on Friday, which could derail plans for teams to gather significant data, especially regarding tyre performance over a long run. Ferrari typically require more running to dial their car into a given circuit, so this could hand the advantage to Mercedes.

Both Saturday and Sunday, however, are likely to remain dry, with low winds and mild temperatures providing drivers with favourable conditions in which to race.

The previous two races have shown the extremes of the performance of Ferrari and Mercedes – power unit and chassis upgrades, allied to the nature of the circuits and the lower tyre tread depth used, have all contributed to the very different performances of the two teams in the these events. Austria could lie somewhere in the middle, especially with the return to Pirelli’s standard tyre specification.

As has been the case since 2014, this is not Red Bull’s strongest circuit, so it may be up to the drivers to make the difference in the fight for the podium.

Elsewhere, those in the midfield with the strongest power units should perform better in relative teams, while Renault may struggle more given the car suffers from high-speed understeer, particularly difficult to handle in the second half of the lap.

However, the Enstone team will benefit from the new MGU-K which was originally scheduled for the start of 2017 – the team have confirmed this is lighter thanks to a revised cooling system.