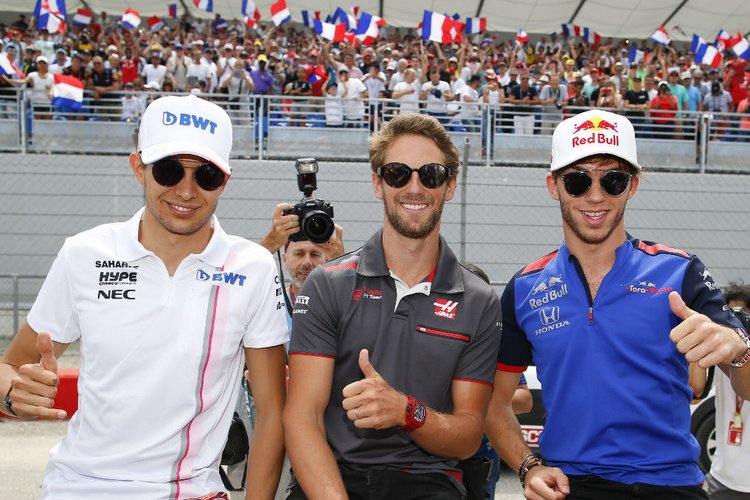 Much was expected of the three French drivers on the grid for the return of the French Grand Prix at Circuit Paul Ricard on Sunday, but the trio did themselves and their fans no favours on an afternoon of disappointment for the local heroes.

Pierre Gasly (Toro Rosso), Esteban Ocon (Force Idia) and Romain Grosjean (Haas) were central to a first lap melee triggered when Grosjean clattered into Ocon, the latter recovered but diving into the first right chicane Gasly was over ambitious on the brakes and crashed into the Force India.

The pair were out within half a kilometre of their home race. It got worse for the pair after the race as stewards reprimanded the pair for their shenanigans.

During the race, Grosjean was given a five-second penalty for his clash with Ocon and soldiered on to finish 11th, his championship points scoresheet at zero after eight rounds.

Ocon was not happy with Grosjean afterwards, “I am especially upset with Romain. I made a good start and got alongside him down the pit straight before he made contact with me. I was on the edge of the track but he moved over and hit me, which caused a lot of damage to the side of my car and the floor.”

“After that, Pierre [Gasly] lost it under braking in turn three and hit me from behind, which ended my race completely. I feel very sad right now because I have been looking forward to racing in front of my home crowd for such a long time and it only lasted three corners,” lamented the 21-year-old.

His more experienced countryman, Grosjean, fobbed off the accusations, “If he looks to my right, there is Leclerc. Where can I go? Let him learn before he speaks.”

Gasly gave his side of the story, “In Turn 3 I went on the inside and I thought Esteban had seen me when I saw he closed the door I couldn’t avoid the collision. It’s a shame to have this incident, especially at the French Grand Prix with two French drivers.

Formula 1 legend Alain Prost regretted the ‘civil war’ among the French contingent on the occasion of France’s return to the F1 championship calendar.

“You’re never alone in the first few corners of a race,” Prost told Canal+. “There are positions to gain, with speed differences depending on tyre choices and other factors. Therefore one must exert a bit of caution even if it’s easier said than done.”

“It’s just too bad to see the French drivers clash, followed by a war of words, including Romain, given that they will often be racing against each other in the tight midfield.”

“They must put this behind them because it’s just not great!” declared the driver known as ‘The Professor’ in his heyday.