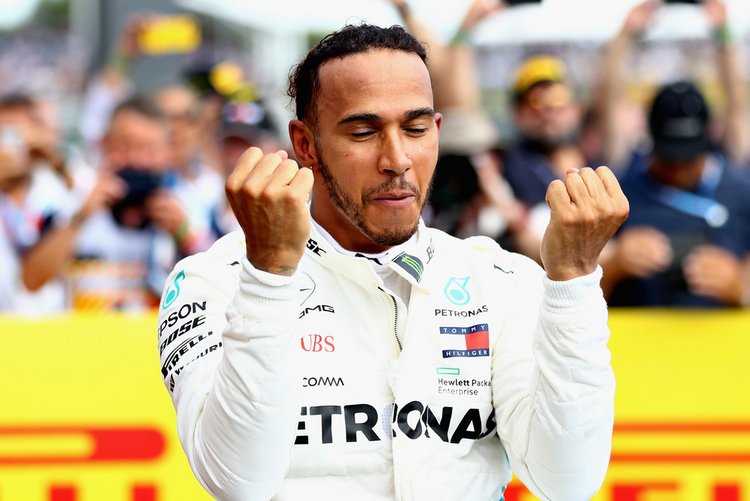 Hamilton who qualified on pole powered to victory in the 53 lap race, the first grand prix in France since 2008, without much of a challenge and in control throughout the afternoon and thus winning his 44th race in the silver of Mercedes.

The Briton now leads the championship after eight rounds with 145 points, 14 more than Vettel while Mercedes lead the constructors’ title race from Ferrari by 25 points.

Hamilton reflected, “I feel very grateful, grateful for a solid weekend. My guys, I have been with them for six years they are pushing the boundaries and never giving up so I want to thank them and everyone at the factory. This is a great day. I enjoyed the race. The weather has been good and good to see so many people here.”

Hamilton’s title rival, Vettel who led the championship before the race at Circuit Paul Ricard, was on the back foot all afternoon after tagging the back of Bottas’ Mercedes and smashing his front wing on the opening lap.

The Finn lost more time than the German as he was forced to limp back to the pits with a punctured rear. he also had floor damage that hampered him throughout the race.

Vettel, who also tagged the rear of Grosjean’s Haas in the first lap melee, was given a five seconds penalty by the stewards for his role in the incident, the Ferrari driver chased hard all afternoon and fifth his reward. Bottas also recovered to finish seventh.

Immediately behind them, there was another multi-car incident when Romain Grosjean in the Haas collided with the Force India of Esteban Ocon, which was then collected by the wayward Toro Rosso of Pierre Gasly who missed his brake marks.

By the time the dust had settled two of the three Frenchman who started the race were out a couple of hundred metres from the start. Grosjean survived to finish 11th despite a five seconds penalty.

The big winner on the day was Max Verstappen in the Red Bull who turned fourth place on the grid to second on the podium with another mature and incident-free performance.

The Dutchman summed up, “It was good. I tried to follow Lewis. He was controlling the pace. I didn’t have to work very hard for it but it’s good to be in the podium.”

Kimi Raikkonen recovered from a poor qualifying and a sluggish start to finish third in the other Ferrari, the Finn having a feisty run late in the race when chasing down and overtaking the Red Bull of Daniel Ricciardo.

Raikkonen said, “I got a bit blocked with all the mayhem that happened but a decent recovery. At the end, we had a lot of speed and managed to get on the podium.”

The Australian was fourth, his car visibly slower with damaged bodywork which in the end denied him the firepower to feoff of Raikkonen.

Behind Vettel, Kevin Magnussen ‘won Division 2’ with a strong showing in the Haas, the Dane capitalising on the first lap melee to bag fifth and with it a decent haul off points for his team who were Best of the Rest this weekend in France.

Carlos Sainz was running as high up as third at one point, but his race was compromised late on when an engine issue cost him power and dropped him from sixth down to eighth. Nico Hulkenberg was ninth, for a double-points finish for Renault on home soil.

The final point went to Charles Leclerc in the Sauber in tenth who again saw his shares rise with a faultless and impressive performance, comprehensively outperforming his more experienced teammate in 14th.

The misery continued for Fernando Alonso, the Spaniard enjoying the highs of winning at Le Mans last weekend with Toyota, on Sunday he was last of the runners in the woefully uncompetitive McLaren, his teammate Stoffel Vandoorne was 12th.

The race started in spectacular style, with championship leader Vettel colliding with Bottas in Turn 1. The German made a good start but could find no way to attack pole position starter Hamilton.

Vettel moved right where Bottas was powering past and as the pair went into the first corner there was contact. Bottas sustained a rear left puncture and Vettel nose damage, which forced both back to the pits for repairs.

There was another incident in heading into Turn 3 when Ocon and Grosjean touyched wheels and then in the turn, Ocon and Gasly collided. Both Frenchman were ruled out of their home race and with debris on the track, the Safety Car was deployed.

Behind the SC Hamilton now led Verstappen, with Sainz third for Renault after a good start from P7 on the grid. Ricciardo was fourth with Räikkönen fifth. After their stops for repairs, during which they also took on soft tyres, Vettel and Bottas rejoined at th back in 17th and 18th place respectively.

Racing resumed at the end of lap five and Hamilton controlled the re-start well to hold his lead over an unchanged top five.

Vettel and Bottas were quickly on the march once racing resumed, however, and by lap 10 the Ferrari driver was up to 10th place, with Bottas in P13. Vettel, though, had been placed under investigation by the stewards, and the German was handed a five-second time penalty for causing the collision with his Mercedes rival.

Vettel was on a march, however and in short order he dismissed Perez and Grosjean to sit eighth behind Leclerc on lap 16 and then he powered past Magnussen and Sainz to take fifth place on lap 20. He was now 30s behind race leader Hamilton, having made a pit stop and taken on soft tyres.

Verstappen was the first of the leaders to make a scheduled pit stop and at the end of lap 25 the Dutchman took on a set of soft tyres before rejoining in fourth place behind Hamilton, Ricciardo and Räikkönen. Vettel was now just 3.7s behind Verstappen in fifth place. Ricciardo then made his stop for softs on lap 28.

Hamilton pitted on lap 33, again for softs, and ceded the lead briefly to Räikkönen. But the Finn made his own trip to pit lane soon after and Hamilton jumped back to first place ahead of Verstappen and Ricciardo who had powered past Vettel when the German made a mistake at the Le Beausset corner.

Räikkönen’s stop dropped him to fifth place behind his team-mate but the Finn had bolted on supersoft tyres and was now lapping considerably faster than Vettel. The German quickly moved over for his team-mate and Räikkönen rose to fourth.

Vettel’s race was then compromised further when he made a second stop for tyres at the end of lap 40. There was an issue with the change and the German was stationary for a crippling 9.1s. He lost no places but there were now 35.9s between him and Räikkönen.

At the front, Hamilton was now seemingly in control. On lap 43 he was 4.8s clear of Verstappen, who was experience a vibration problem on his car, while Ricciardo was a further 9.3 further back. Räikkönen was now 4.5s behind the Australian, with Vettel fifth ahead of Sainz, Magnussen, Bottas (who also had a slow pit stop) Hulkenberg and 10th-placed Leclerc.

Räikkönen then began to close on Ricciardo as his tyre advantage told and with eight laps left he attacked the Australian. The Red Bull driver tried to defend and managed to keep Räikkönen at bay for half the lap but eventually the Finn snuck past through the chicane to take third place.

Sixth-placed Sainz was the next man in trouble and a handful of laps from home he reported a loss of power. He was quickly passed by Magnussen and Bottas and dropped to eighth place, eight seconds ahead of team-mate Hulkenberg.

And that was how it stayed, with Hamilton crossing the line after 53 laps to take his 65th career grand prix victory ahead of Verstappen and Räikkönen. Ricciardo was fourth, with Vettel fifth ahead of Magnussen, Bottas, Sainz, Hulkenberg and Leclerc.

The result means that Hamilton now heads the drivers’ standings with 145 points, 14 clear of Vettel. Ricciardo moves back to third place with 96 points, four clear of Bottas. 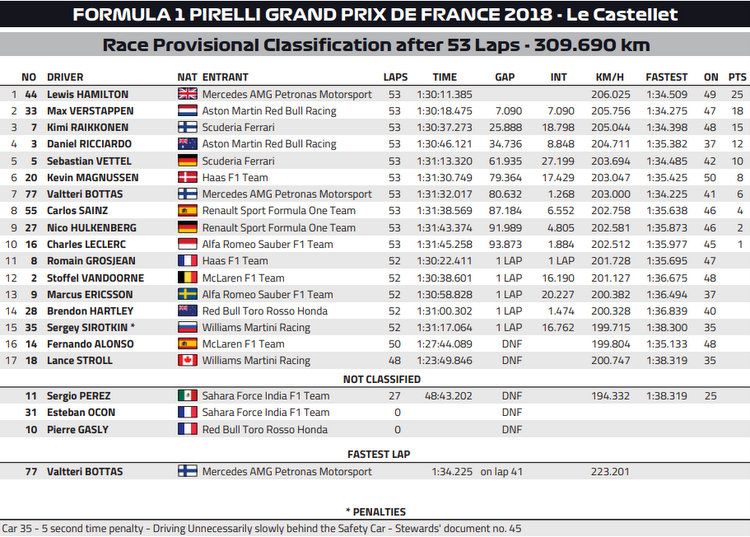