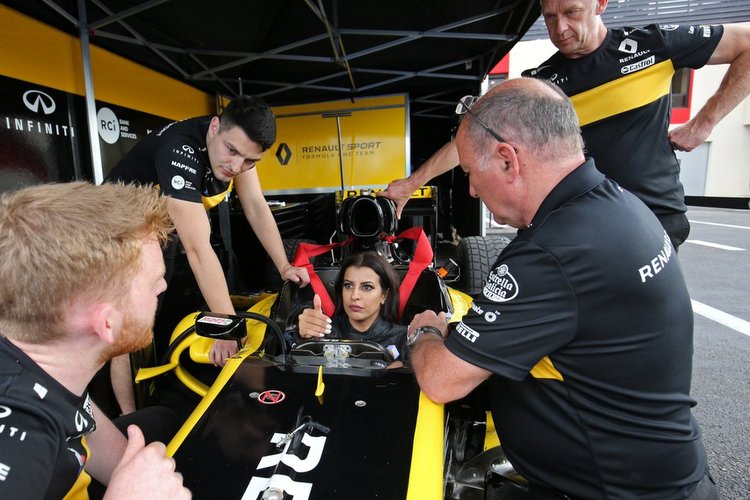 Aseel Al-Hamad will make another breakthrough for Saudi Arabian women on Sunday by driving a Formula 1 car ahead of the French Grand Prix at Circuit Paul Ricard.

The lap of the Le Castellet circuit comes on the day a ban ended on females getting behind the wheel on the Gulf kingdom’s roads.

Renault said Al-Hamad would drive a 2012 car as part of a parade of the French manufacturer’s cars to mark the return of the race after a 10-year absence.

Al-Hamad is already the first female member of the Saudi Arabian Motorsport Federation and on the Women in Motorsport Commission set up by Formula One’s governing body, the International Automobile Federation (FIA).

She first drove the E20 on a June 5 training day at the circuit as part of a familiarisation programme involving a range of cars.

“I have loved racing and motorsport from a very young age and to drive a Formula One car goes even beyond my dreams and what I thought was possible,” she said in a statement.

“I hope doing so on the day when women can drive on the roads in the Kingdom of Saudi Arabia shows what you can do if you have the passion and spirit to dream.”

Michele Mouton, a former rally driver and president of the Women in Motorsport Commission, said she hoped Al-Hamad’s example would help pave the way for more women to embrace careers in motor sport.

Women in Saudi Arabia were able to take to the roads at midnight, ending the world’s last ban on female drivers, long seen as an emblem of women’s repression in the deeply conservative Muslim kingdom.

The lifting of the ban, ordered last September by King Salman, is part of sweeping reforms pushed by his powerful young son Crown Prince Mohammed bin Salman, in a bid to transform the economy of the world’s top oil exporter and open up its cloistered society.

Saudi Arabian Aseel Al-Hamad, the first female member of the Saudi Arabian Motorsport Federation, to drive the @PaulRicardTrack, in the 2012 @RenaultSportF1 car today ahead of the #FrenchGP.
👉 https://t.co/tzyEzSfs7I#RSspirit #RACEday #SheDrives pic.twitter.com/N6WhhUpAWs