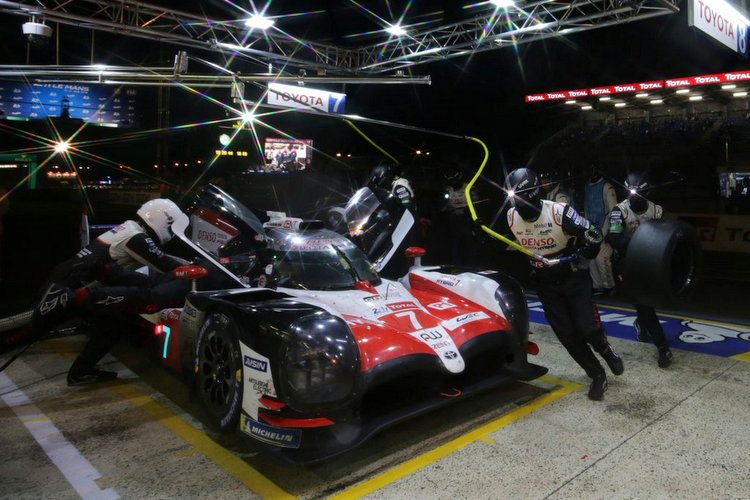 Dominant Toyota led the Le Mans 24 Hours race into Sunday but Fernando Alonso’s hopes of winning at the first attempt took a knock when teammate Sebastien Buemi collected a one-minute stop-go penalty that left him a lap down.

The sanction for speeding in a slow zone left the number eight TS050 hybrid trailing the number seven sister car by more than two minutes — a hefty margin with the two cars lapping the Sarthe circuit at similar pace — as the new day dawned and the race slid into the second half.

Alonso, the double Formula 1 world champion and Monaco Grand Prix winner who is chasing the ‘Triple Crown of Motorsport’, shares his car with former F1 drivers Buemi and Kazuki Nakajima.

Toyota are the only major manufacturer competing in the top LMP1 class after champions Porsche quit the World Endurance Championship last year, and have only themselves to beat.

Rebellion Racing’s number three car was third but four laps off the pace.

Alonso made his race debut with a feisty two hour and 43-minute stint after Buemi had led away from pole position, and handed over in the lead.

It was Kobayashi, however, who led as the race reached the quarter distance and the light began to fade.

There was a scare on the opening lap when Andre Lotterer made contact with the rear of Buemi’s car in the number one Rebellion.

Toyota changed the rear bodywork at the first pitstop before making another modification after Alonso’s shift.

“You’re never going to get anywhere near clawing that back,” the 38-year-old said before finally getting out on track. “Even catching the back of the LMP2 field at the end of the race is tough. It’s become more of a test for us now.”

Alonso, who is dividing his year between Formula One with McLaren and the endurance series, has been the talk of Le Mans as he seeks to become only the second man after late Briton Graham Hill to win the Triple Crown.

The 36-year-old has yet to win the Indianapolis 500, which he led last year before an engine failure but will have a guaranteed second shot at Le Mans next year with Toyota.

Colombian Juan Pablo Montoya, who has won Monaco and Indianapolis, is competing in the LMP2 class but went off at the Indianapolis corner with the United Autosports entry dropping to 18th.

“I made a mistake and I ran wide at Indianapolis, just understeered off,” said the former F1 racer. “I just got on the brakes and locked them up and ran out of talent.”

Spanish tennis great Rafael Nadal got the 86th edition of the race started, giving drivers the traditional instruction to start their engines.