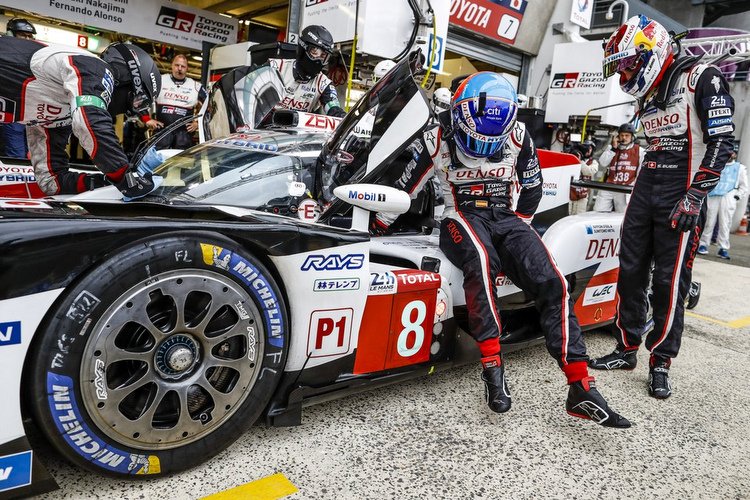 After 18 hours of racing the two Toyota TS050 hybrids are still out in front but there has been a change for the lead, with the #8 Toyota Gazoo Racing in command thanks to Kazuki Nakajima, who went past Kamui Kobayashi in the sister #7 car at 06h25 this morning.

This shortly after Fernando Alonso’s strong stint in the night, putting him on track with Nakajima and Sebastien Buemi to win the race.

Porsche continues to dominate LMGTE, with the #92 Porsche over a lap ahead of the #91 911 RSR as the clock went past the 18-hour mark. The #68 Ford GT of Dirk Muller was lying in third position, 31 seconds behind the second-placed Porsche.

The #26 G-Drive Racing Oreca continued to lead the LMP2 class with Roman Rusinov still in the car at the top of the hour. The Russian team is over a lap ahead of the second placed car, the #23 Panis Barthez Competition Ligier, with the #36 Signatech Alpine A470 a further lap behind in third.

The #77 Dempsey-Proton Racing Porsche of Christian Ried is also still out in front of the class, over a lap ahead of the #54 Spirit of Race Ferrari F488 of Giancarlo Fisichella

There were plenty of incidents in the third quarter of the 86th edition of the 24 Hours of Le Mans. Both Toyotas had to serve stop and go penalties for speeding under slow zone regulations.

There were several cars that went off track during the night with some retirements. The #47 Cetilar Villorba Corse Dallara went of into the gravel at Indianapolis and had to be recovered, the Italian team able to return to the track.

The #82 BMW wasn’t so lucky, with Alexander Sims going off into the wall at Porsche Curves. The heavy damage forced the retirement of the car. The #84 JMW Motorsport Ferrari also went off at Porsche and there were reports of oil on track.

The #88 Dempsey-Proton Competition was another retirement from the LMGTE Am class after hitting the barriers, with the #10 Dragonspeed BR01 of Ben Hanley also going off at Porsche Curves a few minutes later.

The #52 AF Corse Ferrari had to serve a drive-through penalty for speeding in the pitlane.

Alonso: I’ve got into the rhythm of the night