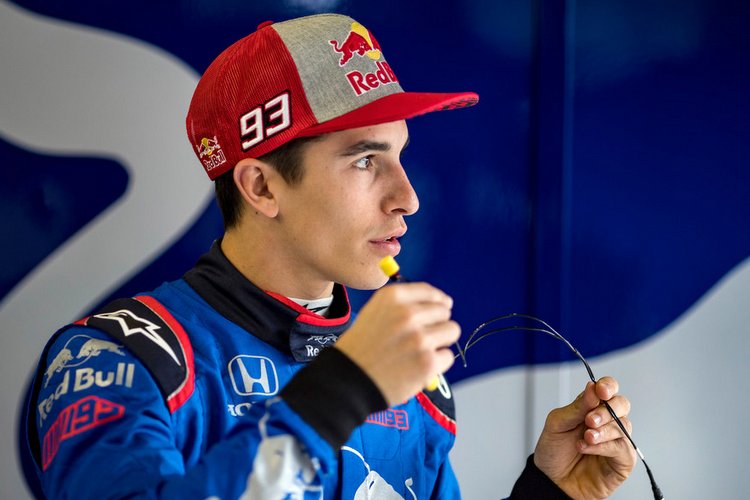 Formula 1 World Champion Lewis Hamilton would welcome his MotoGP counterpart Marc Marquez to the pinnacle of the four-wheel version of the sport after the Spaniard had a run in a Toro Rosso earlier this month.

Hamilton knows that the transition from MotoGP to F1 for a rider is more realistic than vice versa, namely an F1 driver switching to MotoGP, something that has never happened.

Decades ago several motorcycle riders (MotoGP level at the time) made the switch from two-wheels to Formula 1, racing legends John Surtees, Mike Hailwood and Johnny Ceccoto spring to mind. The trend stopped but in the wake of Marquez’s F1 test the ‘migration’ is again in the spotlight.

In the wake of the Spaniards’s test at Red Bull Ring, Hamilton told Spanish reporters, “I think the test Márquez did was interesting and exciting. F1 would always welcome a legend like him.”

“I knew that Marquez was interested in F1. I think it’s easier for a motorcycle rider driving a F1 than the reverse. I’m sure that if I had to try a MotoGP, I would break bones very quickly,” insisted Hamilton who has always had the itch to ride a MotoGP machine but reportedly his team will not indulge his two-wheel dream.

Hamilton added, “We know how well MotoGP riders have done in Formula 1 in the past, but the road to actually racing would be a complex one. If I had an opportunity to do MotoGP, just for a test, I’m sure I would fall and I would get hurt.”

“These guys know how to fall and they are at the peak of their craft, unfortunately, I’m not unbreakable and with all the times that Marquez has fallen he must be!” joked Hamilton who is a self-confessed motorcycle enthusiast.

The Mercedes driver signed a partnership with motorcycle manufacturer MV Agusta which has led to the F4 LH44 model, which was based on direct dialogue between Hamilton and the CRC (Castiglioni Research Department) laboratory.

“My projects with MV Agusta are a great way to combine my love of riding bikes with my interest in the creative design process,” said Hamilton when the F4 LH44 broke cover last year.

Big Question: Could a MotoGP champion be successful in Formula 1 in this era?