Alonso: One of the most important victories of my life 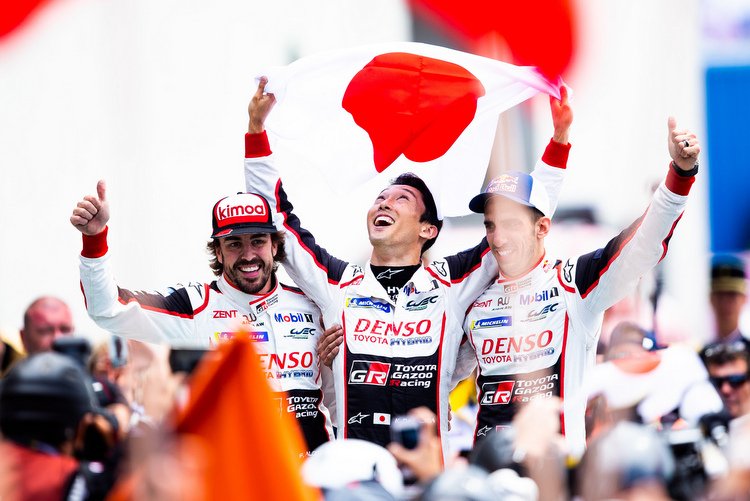 Fernando Alonso’s Le Mans dream was realised as he celebrated on the top step of the podium after he and teammates Kazuki Kanajima and Sebastien Vettel, both ex-Formula one drivers powered to victory in the #8 Toyota Gazoo Racing TS050-Hybrid.

Shortly after winning the world’s most famous endurance race, Alonso told Spanish reporters, “This is one of the most important victories of my life.”

“It is an important day, perhaps historic up there with Marc Gené and of Antonio García, to have the Spanish flag on the podium is important and for me, after joining this adventure and running these historical races such as the Indy 500 is special.”

“Being competitive with specialist drivers makes me feel very proud that I am able to exploit the ability I have to adapt to cars. I will sleep with this trophy, as I did with the one from Spa,” added the Spaniard who now has two wins from two starts in the World Endurance Championship (WEC) with Toyota.

“I am proud of the work we did, the preparation to get this title, but it was the job of six or seven drivers for us to win today, those of us who got together at the 36 hours of testing in Aragon, being together, eating together, winning together… whether #7 or #8 won the race was down to fate.”

Toyota were always expected to dominate the 86th running of the race as the only works team on the grid, but they have endured 20 years of heartache at the Sarthe venue before finally get their hands on the most coveted prize in sportscar racing.

Alonso acknowledged, “The truth is that we were very prepared and there were no big surprises in that sense, the first stint was to adapt and not make mistakes and when I woke up at night and saw that we were two minutes behind we had to go for it hammer and tongs if we wanted to get into the race.”

“When I can win and when I cannot I still try, what I never do is give up. Since January, I’ve been preparing for this race, with many days of simulator, time, working with the team, many days of tests.”

“Now it may seem it was easy, but it was not it was no coincidence that our team was better than the others,” added Alonso who now only lacks a victory at the Indianapolis 500, to add to his previous Monaco Grand Prix victories plus the fresh Le Mans triumph, in his quest for the Triple Crown of Motorsport.

Alonso will remain in France where he will return to the orange colours of McLaren for the French Grand Prix at Paul Ricard next weekend.