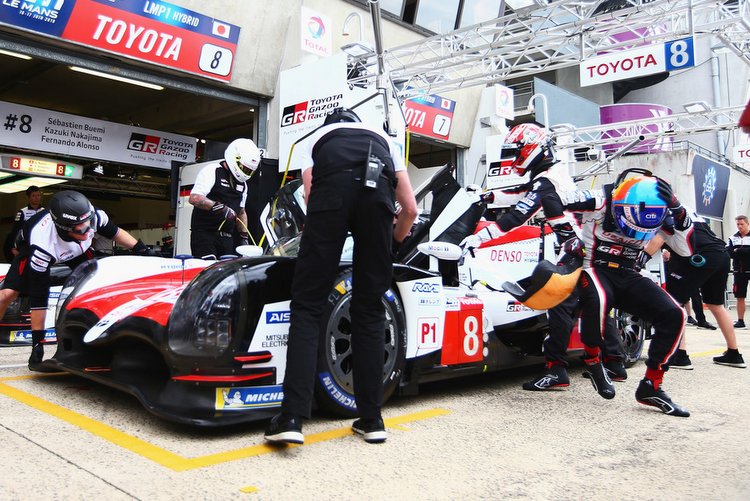 In Wednesday’s first late-night qualifying session for the 24 Hours of Le Mans, Kazuki Nakajima laid down a marker by setting the fastest lap to claim provisional pole position for the world’s most famous endurance race to be run this weekend at the legendary venue.

The Japanese driver, in the No.8 Toyota TS050 Hybrid which he shares with Fernando Alonso and Sébastien Buemi, lapped the dry Sarthe circuit with the fastest time of 3:17:270 in the opening ten minutes of the two-hour session and the time was not bettered throughout the evening.

Toyota, now the only major manufacturer entered in the top LMP1 category after champions Porsche quit, have only themselves to beat but can take nothing for granted after losing out in 2017 due to unreliability.

The Japanese team are seeking their first win at the 20th attempt to become only the second Japanese marque after Mazda to triumph in the endurance classic.

SMP Racing offered the closest challenge through Stephane Sarrazin’s 3:19.483 in the No.17 BR Engineering BR1-AER, while the No.1 Rebellion R13 Gibson ended up in 4th place with a time of 3:19.662 courtesy of Bruno Senna.

Jenson Button, the 2009 Formula One champion, also completed his night laps in the number 11 SMP Racing BR1 that was seventh fastest.

In LMP2, Paul-Loup Chatin set the fastest lap in the IDEC Sport Oreca 07 Gibson, and just 0.284s behind was the TDS Racing ORECA of Loïc Duval – the chassis manufacturer once again filling the first four places in the time sheets.

G-Drive Racing was third and DragonSpeed fourth thanks to the Jean-Eric Vergne and Pastor Maldonado respectively.

Kobayashi took pole last year in a record 3:14.791 and the track has been shortened by three metres since then for safety improvements.

With the possibility of rain on Thursday, when two more qualifying sessions are scheduled, there is a chance that Wednesday’s time will secure pole.

While Nakajima set the pace, Le Mans rookie Alonso completed a mandatory five laps in night conditions in a car that took the trio to victory in the opening race of the season at Spa in Belgium.

The Spaniard is combining a full Formula One and world endurance season and arrived at the French circuit straight from competing in last Sunday’s Canadian Grand Prix for McLaren.

Porsche GT Team’s Gianmaria Bruni was at his very best on the night, in his first 24 Hours of Le Mans for the German manufacturer.  His lap of 3:47.504 in the No.91 Porsche 911 RSR was a full 1.5 seconds ahead of his teammate in the No.92, Michael Christensen, thus giving Porsche a 1-2 in the LMGTE Pro class.

Ford Chip Ganassi Racing took the second row of the provisional grid, with Olivier Pla in the No.66 edging out Dirk Müller in the No.68 with a lap of 3:51.498. The best Ferrari lap came courtesy of current World GT Champion James Calado in the No.51 488 GTE to place him 5th ahead of another two Porsche 911 RSRs and a third Ford.

BMW, Corvette and Aston Martin were unable to demonstrate the same pace at the Porsches and Fords tonight, but there are another two further qualifying sessions due to be held tomorrow and all to play for.

Porsche also led the way in LMGTE Am with a provisional front row lockout for Dempsey-Proton Racing.

Italian Matteo Cairoli set a blistering pace in the 911 RSR, under the watchful eyes of team owner Patrick Dempsey, with a lap of 3:50.728.  Also on the pace was Australian driver Matt Campbell in the No.77 sister car from the Christian Ried-run team.

Third in class was Ben Barker in the No.86 Gulf Racing Porsche, making it an excellent day for the manufacturer celebrating its 70th anniversary.

The second Qualifying session is scheduled to start at 19h00 on Thursday and will last two hours. 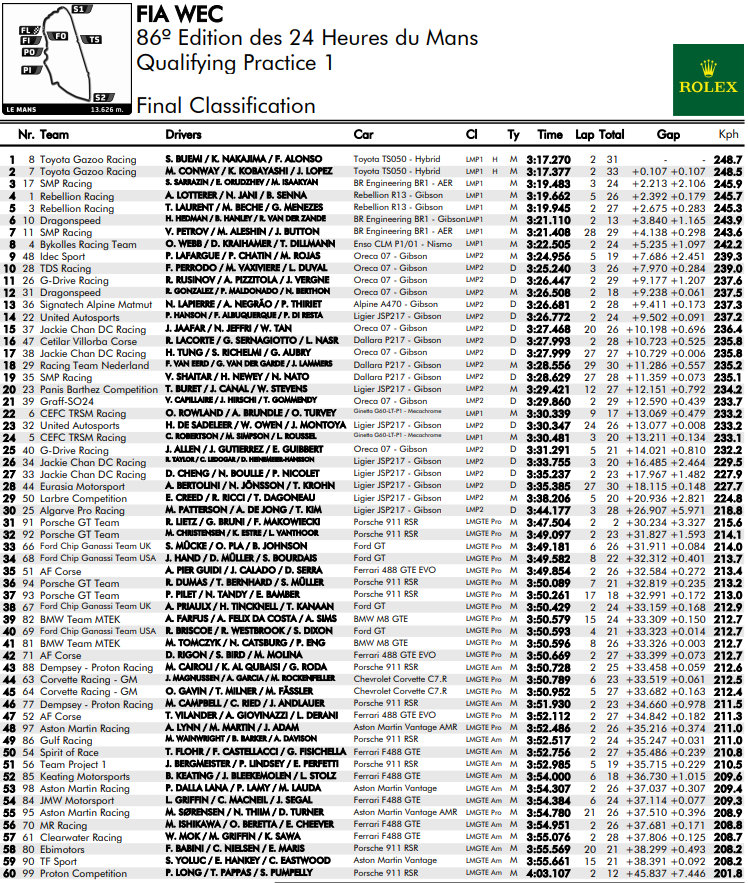