Former Formula 1 driver Kamui Kobayashi topped the timesheets in Wednesday’s Practice session as cars took to the track for the first time in preparation for the second round of the WEC Super Season.

Toyota Gazoo Racing finished the session on top with a best time of 3:18.718 from Kobayashi in the No.7 TS050 Hybrid, while the No.8 Toyota finished second, 0.055 of a second behind, after a last minute hot lap from Sébastien Buemi who shared duties with Fernando Alonso and Kazuki Nakajima.

Rebellion Racing and DragonSpeed were both hot on the heels of the Toyotas with Thomas Laurent in the No.3 Rebellion R13 Gibson in third with a time of 3:19.716

The session was largely uninterrupted despite several cars going off track which caused Slow Zones procedures to be introduced but there were no major incidents.

The first five positions in LMP2 were filled by Oreca chassis, with the Total 6 Hours of Spa Francorchamps-winning G-Drive Racing leading the way.

Jean-Eric Vergne set the best time with a lap of 3:26.529 in the No.26, ahead of European Le Mans Series entrant IDEC Sport Racing, TDS Racing and DragonSpeed from the WEC.

Porsche dominated the LMGTE Pro class, with Patrick Pilet repeating his performance at the Test Day and setting the fastest lap of all the Porsche GT Team 911 RSRs.  The Frenchman’s time of 3:50.121 in the No. 93 Porsche came near the end of the four-hour session, leading the No.92 ‘Pink Pig’ and No.91 in the famous blue and white livery, which were separated by just one-hundredth of a second.

Dempsey-Proton Racing’s Matteo Cairoli topped the LMGTE Am category with a quickest time of 3:52.903, the No.88 Porsche 911 RSR finishing almost a second ahead of the No.86 Gulf Racing Porsche.  Spirit of Race’s Ferrari 488 GTE was third in class, a mere tenth of a second behind.

The first of three qualifying sessions is set to get underway at 22h00 local time.  Drivers will be able to use this two-hour session to not only complete their mandatory night laps but also to make a claim for pole position in each of the four different categories. 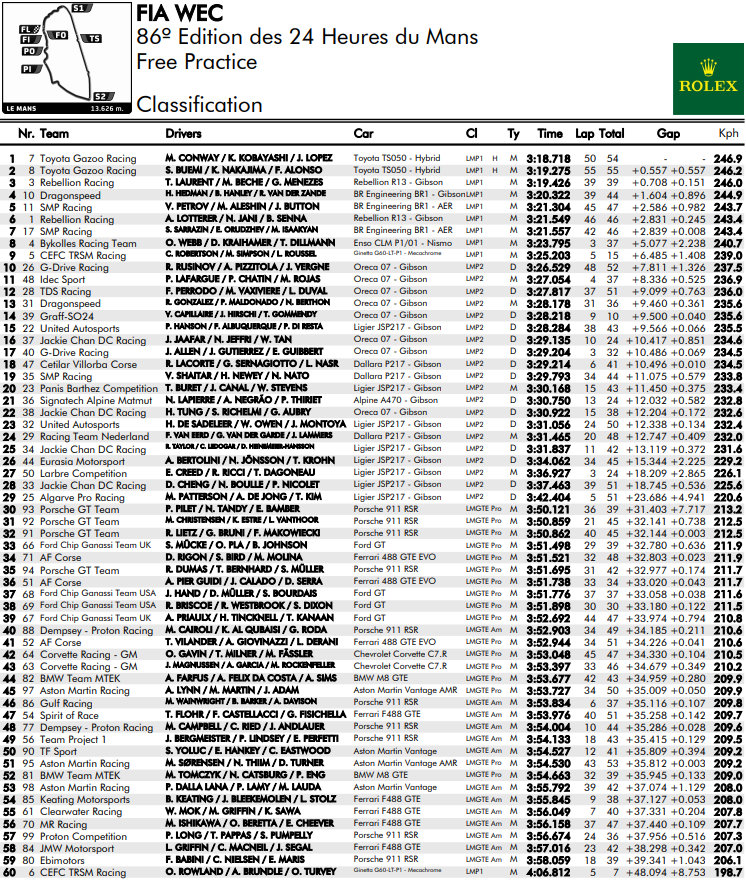