The Circuit Gilles Villeneuve has many similarities with the Baku city circuit, rewarding straight-line performance as well as mechanical grip in the slow-medium speed corners.

The Canadian Grand Prix weekend, Round 7 of the 2018 Formula 1 World Championship, also marks the first appearance of the HyperSoft tyre on a track where its race performance, especially, can be judged – Monaco saw a great deal of tyre management, with drivers safe in the knowledge that they could not be overtaken.

Due to the presence of multiple straights, the longest being that heading towards the final chicane, teams take off a chunk of downforce from their cars, although the change is not as significant as that seen at tracks like Baku, Spa or Monza. Those with weaker power units will need to compromise cornering speeds more while running enough rear load to keep the rear tyre wear and degradation under control.

As well as a low drag set-up and high engine power, strong mechanical grip is required from the car in the multiple slow corners on the track, while Aerodynamic downforce is rewarded less here. An efficient Aero philosophy, however, is important, something which Ferrari has tended towards with its 2018 car, and part of the reason for its improved performance in Baku relative to 2017.

There are a large number of significant braking events around a lap in Montreal, requiring both high stopping potential as well as consistency from lap to lap, allowing drivers to maximise car performance.

Brake cooling and durability is also critical, and often an issue during the race. Finally, the aggressive kerbs, especially at the final chicane, require a compliant car, allowing drivers to take the shortest possible route through a corner. 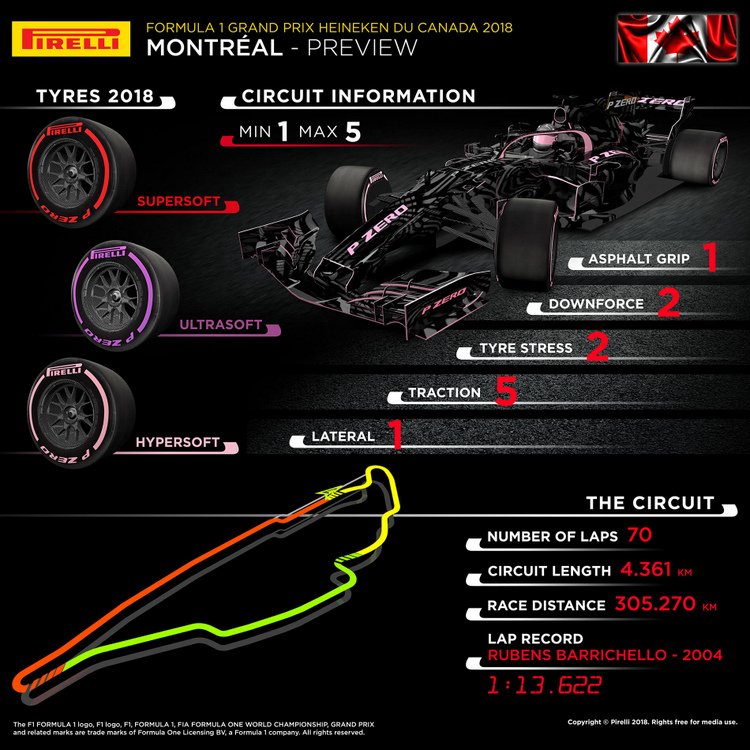 Turn 10 is critical, not only because it requires heavy braking on entry, but also because the performance in this corner determines the speed carried down the ensuing straight, which may enable the possibility to complete an overtaking manoeuvre into the final chicane. This chicane it itself important, as the aforementioned high kerbs reward driver bravery, with the Wall of Champions at the exit of the corner punishing driver errors.

The introduction of the Hypersoft tyre in Canada should provide some strategic variation this weekend. As seen in Monaco, the tyre has high one-lap performance but then falls away considerably over a race stint, to varying degrees depending on the car.

Last year, the Supersoft was capable of 60 laps, and the Ultrasoft managed more than 30 laps. This season’s Ultrasoft and Supersoft are similar to last year’s, but perhaps with a little more performance and less durability; perhaps they will be able to manage 25 laps and 50 laps respectively in 2018.

An Ultrasoft-Supersoft strategy would seem to be the one of choice, avoiding the tricky HyperSoft, but only completing one-stop, which is preferable given the general difficulty in overtaking. It is therefore likely that at least some of the front runners will attempt to complete Q2 on the Ultrasoft, at the risk of being eliminated due to the high-performance difference to the Hypersoft, in order to enable this one-stop.

Mercedes certainly appears to be looking at this option in detail, choosing as many sets of the Ultrasoft as the Hypersoft (5). It may also be possible to start on the Hypersoft and then run the SuperSoft, especially for the Toro Rosso, with Gasly managing a particularly long opening stint in Monaco on the Hypersoft. The likes of Red Bull may opt for a more aggressive two-stop, especially with grid penalties likely for Ricciardo at least. 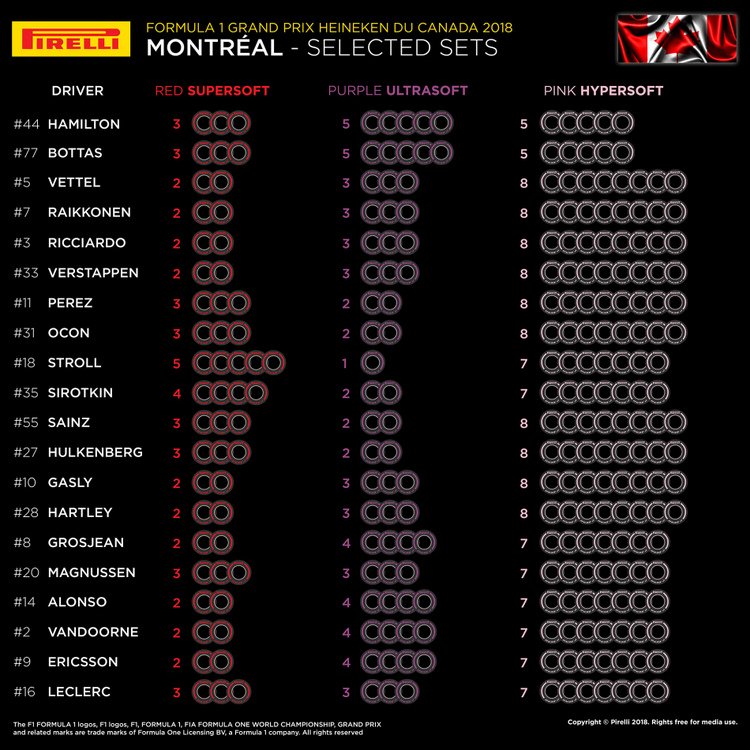 Canada is one of the better overtaking circuits, something which will be aided by the addition of a third DRS zone for 2018. This zone is extremely unlikely to facilitate overtaking opportunities in itself, but it should enable following cars to remain closer to each other before the long run to the final chicane, where overtaking in the second DRS zone is likely. Also of benefit is the use of consecutive DRS zones, with the zone into Turn 1 providing a further opportunity for passing if it cannot be completed on the back straight.

The weather is expected to be dry on all three days, with moderate winds and warm temperatures. This is perfect for the teams, with the Engineers able to collect significant data on set-up and tyre performance during Friday practice, before making the necessary changes before competitive sessions to optimise performance.

The characteristics of the Montreal track are in many ways different to Monaco, but there are some similarities in terms of the emphasis on mechanical grip, driver confidence and low speed downforce, with these factors favouring Red Bull over Ferrari and Mercedes.

However, its straightline speed performance deficit, together with likely grid penalties, will blunt a potential charge, although higher than expected tyre wear would prove beneficial. Between Ferrari and Mercedes, there may be little to choose between the two; Hamilton’s strong form around the circuit may tip the balance in favour of the World Champions.

Further back, Force India will look to continue its strong run, with the street circuit characteristics of Montreal, together with the long straight, favouring their package. Meanwhile, the likes of Renault and McLaren could be susceptible to attack from those behind with better straightline speed, and could face a battle to score points, especially with Haas bringing a major Aerodynamic update this weekend.