Ricciardo: Definitely my best weekend and most satisfying 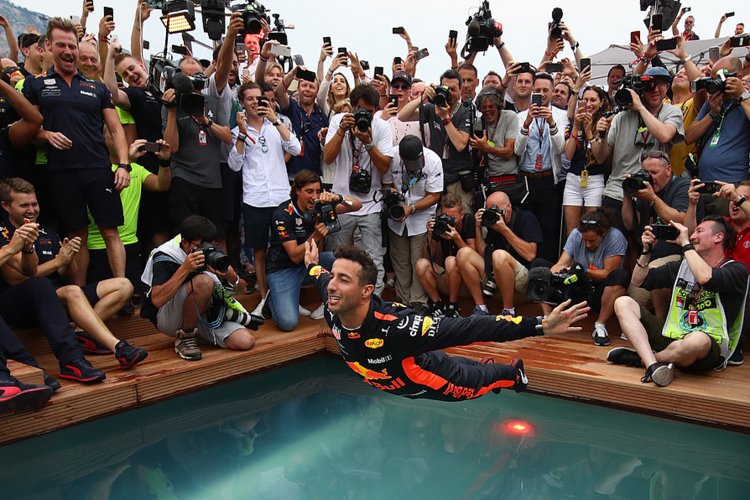 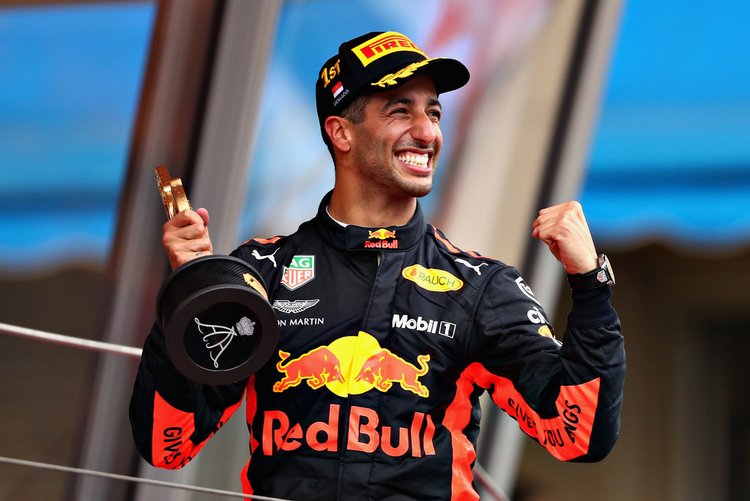 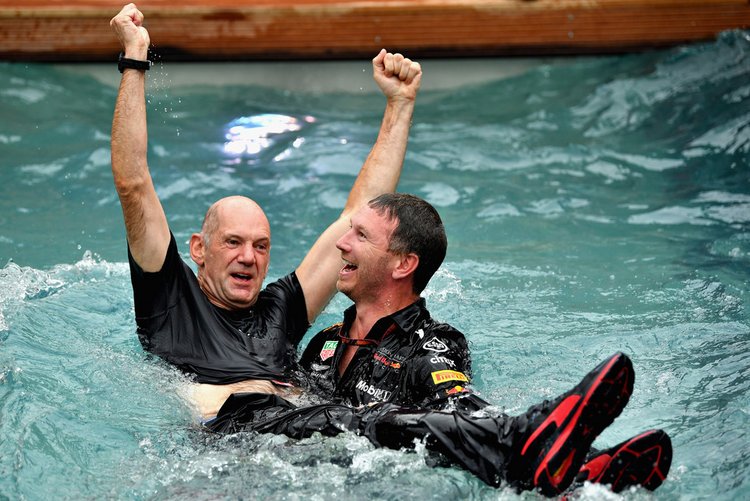 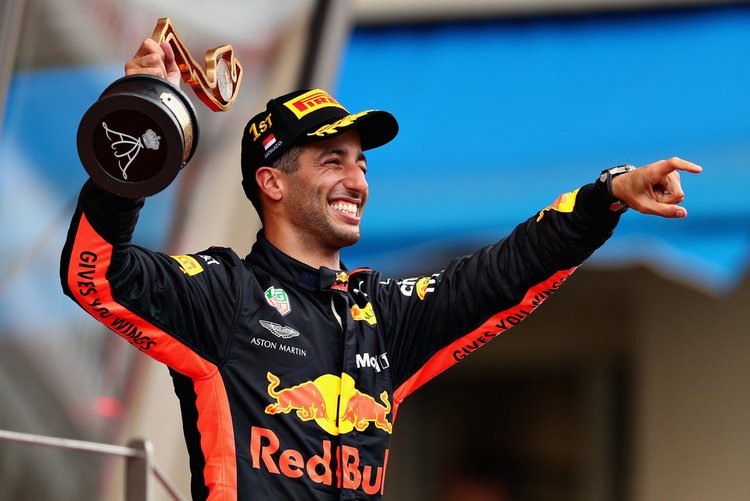 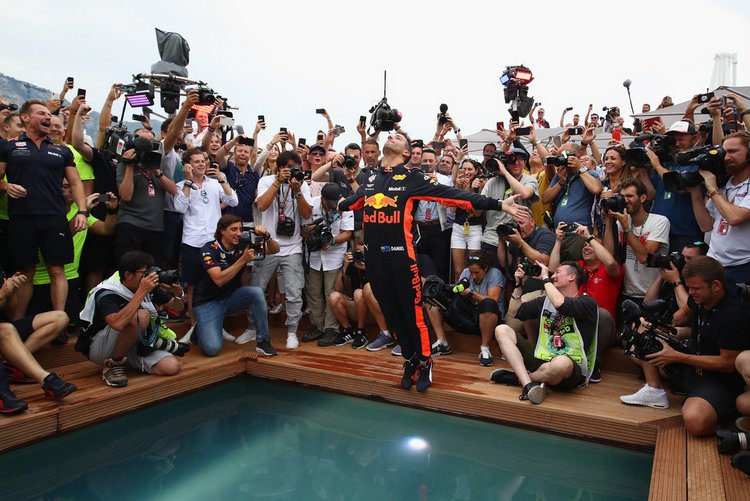 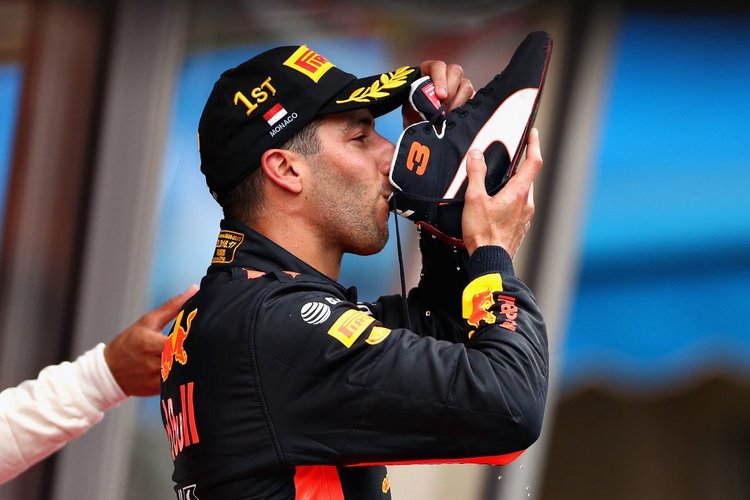 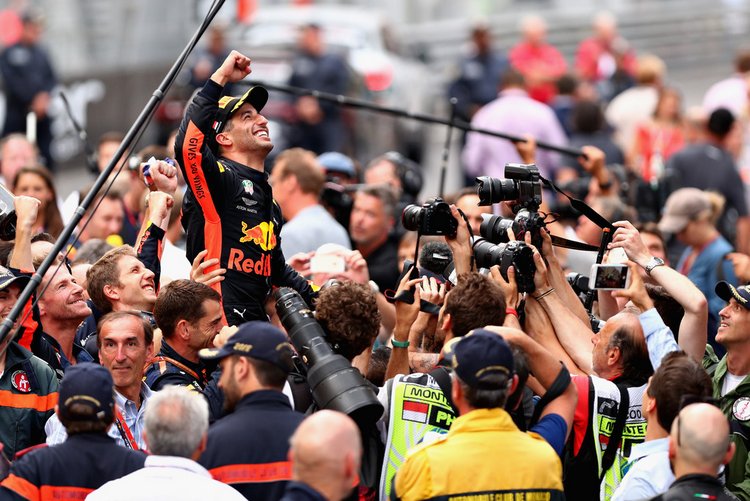 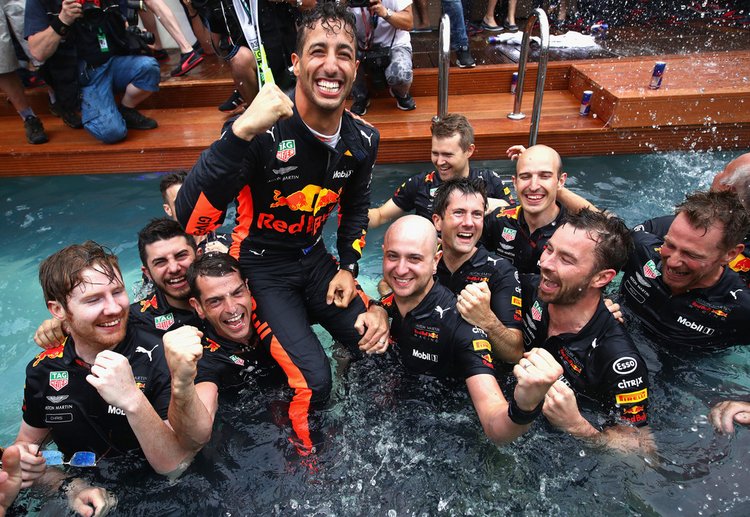 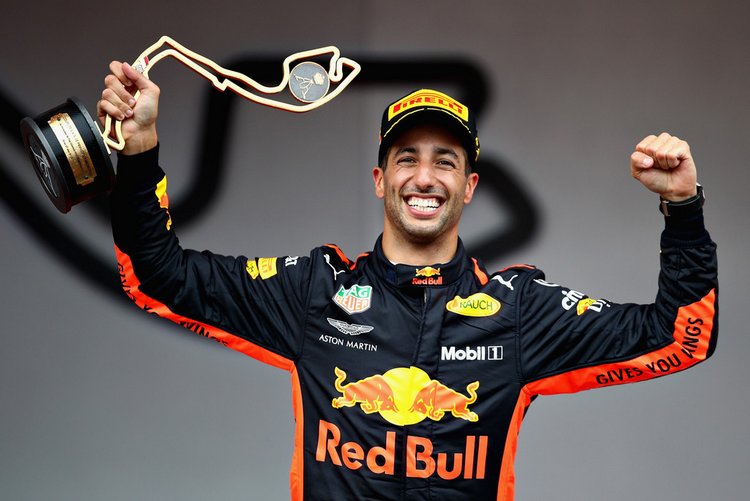 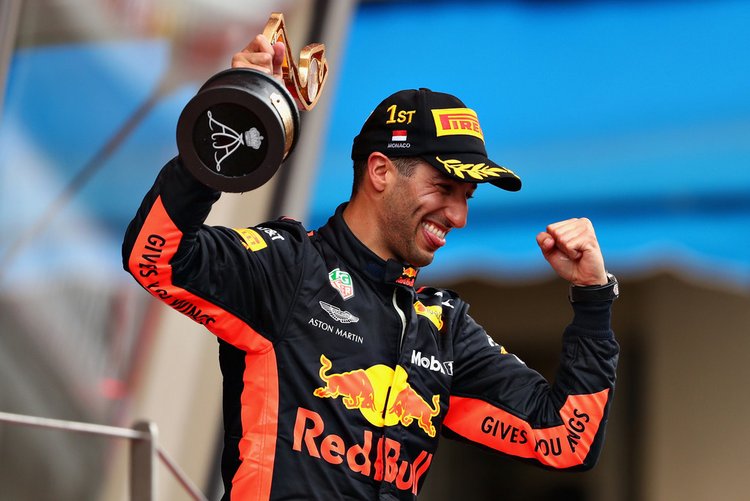 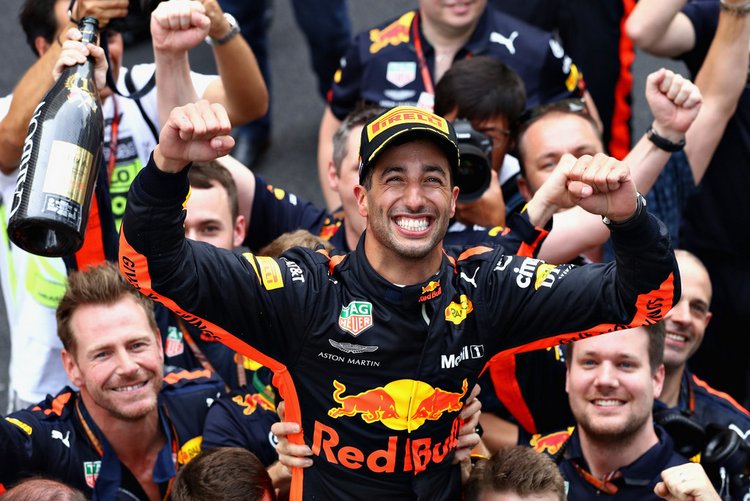 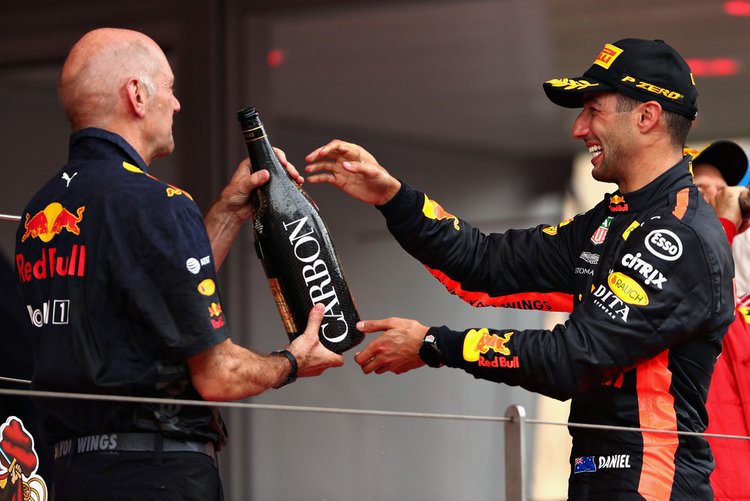 In 2016 Daniel Ricciardo was robbed of certain victory at the Monaco Grand Prix due to a pitstop blunder, fast forward two years and the beaming Australian stood in the middle of the royal podium celebrating victory at the sport’s most famous and hallowed venue on a day in which his karma was generous with payback.

The Red Bull driver nursed his stricken car from early on in the race until the end, having dominated the free practice sessions and qualifying earlier during the weekend at the principality.

He spoke after a famous victory at the place he calls his second home.

You win in Monaco. How do you feel?
DR: Ah… good. I think I can show more emotion today than yesterday. Two years in the making this, so I finally feel like the redemption has arrived. We had problems. I don’t know how much the radio broadcast, but we had a lot to deal with during the race. I think it was before halfway, I felt a loss of power and I thought the race was done and we got home just using six gears. Thanks to the team we got it back. I’m stoked.

We did have the radio played into our broadcast. We were with you in the cockpit. We knew you were driving wounded. This was reminiscent of Schumacher in Barcelona, stuck in fifth gear. You managed it superbly so that must make it even sweeter?
DR: There were a few doubts that came in mid-race, but yeah, just… we won Monaco! Feels good, feels good. Thanks everyone for the support. There were a lot of Aussie flags on the in-lap, so thanks everyone. Awesome.

In the past with Red Bull, we have seen victories celebrated by jumping into the pool and jumping in the harbour. What will you do?
DR: As I said, the pool looked a little bit worse for wear yesterday, so maybe the harbour is cleaner – and it’s higher, so maybe more fun.

You didn’t need anything else to go wrong but when the VSC came out, were you thinking good news or bad news?
DR: I saw the debris in the chicane I think it was. I didn’t really want anything. I was just like “let’s get this race finished”. It had already felt long enough. I was glad it was a VSC and not a Safety Car, because I thought having less power, with the problems, I would have been vulnerable on a re-start. Again, it’s hard to overtake here, so if I got good traction out of the last corner and blocked into Turn 1 I still think I would make it difficult for Seb but I didn’t feel like becoming vulnerable in the last few laps. We’d already done 72 or something. I wasn’t excited to see it but yeah, in the end it helped me as Seb seemed to lose time behind it, but it just made the last few laps go a bit longer.

It’s time for celebration for sure, but concerning the next race, Daniel, mainly for you, it’s a certain of completely characteristics, do your performances relate to the track or have you really made a step forward on your car?
DR: For sure the circuit helps us. As I said, I was using six gears pretty much the whole race, didn’t touch seventh or eighth. I think all weekend anyway we’re not really using eighth, so I think it shows that even with an extreme loss of power our chassis still works really well. Fortunately this isn’t a power circuit, so I think the circuit certainly helped us here. It’s proven again we have a really good chassis. Montreal, we’ll see. I think we’re back on the hypersofts. It looked like our degradation was better than the others today. Montreal is more of a power circuit. If our chassis is working well and being kind on tyres we may see ourselves fighting again but as always this circuit leans towards our strengths. As I said in Italian earlier, we’ve all got two victories between us this year, I wouldn’t have thought that coming into February so that’s pretty cool and we’ll try and keep it going for now.

You’ve got an engine upgrade coming for Canada which is supposed to be pretty good. Can you be a title contender?
DR: I think it’s a natural question after a victory. I think I got asked after China if it means we’re in the title hunt. We’re still… I think Lewis still has a pretty good buffer on me, so we’re still on the outside of that. It’s not impossible but not really at the forefront of my mind yet. But, even if it was, I’m not going to change obviously the way that I’m driving or trying to attack. So, yeah, Montreal will be interesting. Try to get a few more podiums but yeah, we’ve got to probably prove on at least one other circuit before the summer break that we can win again. And then maybe we’re a nice little outside chance. For tyres, yeah, I think today, because it’s a tight circuit, you’re able to take the piss a little bit with going slow. I mean, there were times I was really cruising but, y’know, the circuit allows you to do that because it’s hard to overtake but I don’t think we’ll be able to maintain that kind of rhythm on a circuit like Montreal or something. So, I think it’s more circuit-dependent – but I’m glad they’re bringing the hypersofts again. When we pitted early, I thought it was maybe even looking like even a two-stop race – but obviously we could control the pace. But, as I said, on a different circuit I think today would probably have been a two-stop.

At the end, Christian Horner mentioned Michael Schumacher’s race in Barcelona where he finished and won after difficulties. I’m just wondering what that meant to you when he mentioned that, and can you just take us through your roller coaster of emotions during the race?
DR: I don’t really know how to… Obviously it’s a compliment towards me and my race. I don’t really know… so much went on, I guess, for me in that race, trying to figure out what was going on. It’s hard to kind of let it all sink in, once it’s done. Even now, I don’t know, it feels weird that I did get that win but obviously I will take the compliment.
Obviously it’s a long weekend here with the practice on a Thursday, it stretches the weekend an extra day so it’s a long week. There’s obviously a lot of hype – I mean I love it, it is the most fun weekend of the year but it is pretty draining so even today it was long and the race obviously starts an hour later now – an hour and ten minutes later. Yeah, you’re just trying to like control everything until the moment of the race. I kind of wish the race was at ten in the morning so we could just get it done already. Going through all that and then finally starting, getting a good start, that was really the key moment and then obviously, as I mentioned, the problems I had, that obviously threw a lot of doubt in my mind for a few laps. Every lap I got by with no extra problems was a little victory so happy to see the chequered flag.

Can you explain a bit how you drove around that problem? Was it only deploying the energy or was it also harvesting and did you have any problems with the temperatures in the car because of the rear brakes and so on?
DR: Yes, obviously I had a lot less power so that was the obvious thing, but then, yeah, the rear brakes got really hot so I went I think six or seven percent forwards with the brake balance. That’s a lot. Maybe we go one or two percent change during the race, at least, for us, so we had to go a long way forwards and I have to lift a lot before braking to save the brakes and put less energy through them. The pace was slow, for the power, the pace was slow to manage the tyres and then the pace was slow because I was managing brakes. Hence why it felt like a very long race but obviously we got it home.

Daniel, is this your most satisfying victory?
DR: I think it’s… give it two days, probably and I look back on the weekend as a whole, I think it was definitely my best weekend and the most satisfying. Right now, there’s still a lot to process but as I said, once it all settles I think yeah, I could probably say that. You know the race itself… it’s a different race to a China. China obviously got everything going and got the adrenalin going and whatnot but as a whole this is probably the best weekend of my career.

After a weekend like this where you’ve dominated, winning in difficult circumstances today, would you say that your stock as a driver has never been higher than this?
DR: I guess. We’ll see. We’ll see what the others think. I can’t pay myself but for sure I feel I’ve done a really good job the first six races and as I said, we’ve all got two victories so yeah. Lewis is being nice.