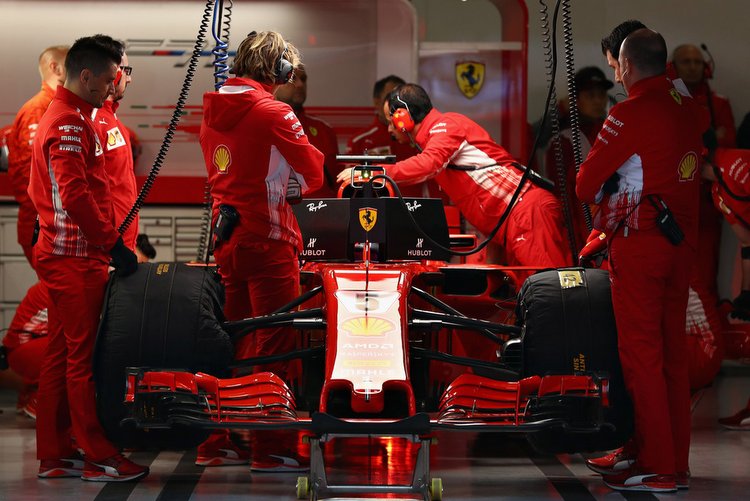 At both the Azerbaijan Grand Prix weekend, and the next race in Spain, teams will be trying out a raft of technical updates, with Baku being the first low downforce Formula 1 venue of the season resulted in some interesting upgrades by various teams.

The city street circuit provides teams with a choice – either run very low drag for good performance in sectors one and three, together with a strong racecar or run more downforce and attempt to make your time up in the middle sector.

Aside from this, Sauber also introduced a major front-end update to its C37.

Ferrari continued its strong start to the season in Baku, once again taking pole position, while also possessing the fastest race car. The team was aided by developments at both the front and rear of the car, with a new front wing endplate likely being a precursor to a major Spanish GP upgrade, while two rear wings design were brought to Azerbaijan.

The first of these was tested in China during FP1, while the second is very similar, but features a lower angle of attack across the span. 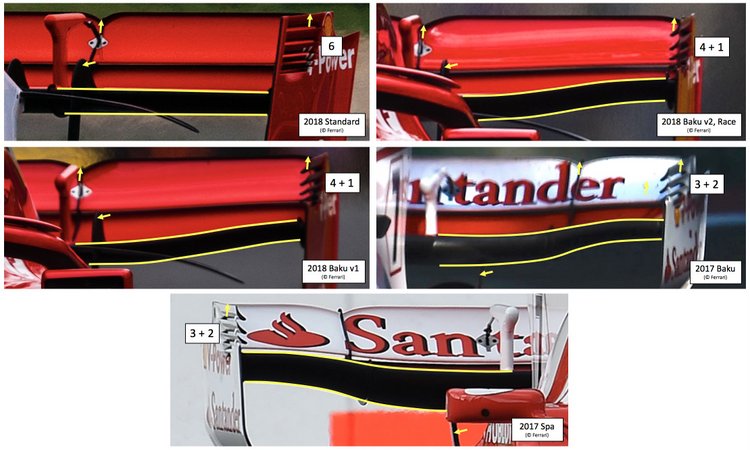 Relative to the standard wing, the decrease in the number of louvres by one to five, together with a bend of open/closed designs will have been aimed at optimising the bleeding of high-pressure air between the endplates towards the more ambient conditions outside them, decreasing the strength of the wingtip vortices.

The benefit of the spoon-shaped design over the standard, flatter mainplane one is motivated by Aerodynamic efficiency. Those wing sections closest to the endplate are those that contribute most to the strength of the drag-inducing wingtip vortices, whereby high-pressure air from the top surface of the wing spills over to its low pressure underside, creating a rotating flow.

Therefore, reducing the pressure differential near the endplates, but still maintaining a good angle of attack in the central section, can benefit straightline speed significantly, while not overtly compromising cornering performance. Ferrari’s v2 2018 Baku wing would have taken this a step further by reducing the entire angle of attack and also displaying slightly more of a spoon-shape.

It is interesting to compare the lower downforce designs from 2018 to the equivalent from last year. In terms of angle of attack, the Baku v2 design corresponds very well with the edition run last year at Spa, while the v1 concept has a more aggressive angle than the 2017 Baku version, perhaps giving the team scope to use the spoon-shaped philosophy on a wider range of tracks, with Silverstone and Suzuka, both power tracks, being examples.

One major difference between the wing profiles is the significant reduction in camber used for this season. Camber helps to increase the amount of downforce, although this will, of course, increase the wing’s pressure differential and drag, while also increasing the probability of flow separation from the underside of the wing.

Further to this, the flap design on the 2017 wings featured two V cut-outs, corresponding to the positions of the slot gap separators, mandated by the regulations. For 2018, three separators are used, two at the wing tips, and one in the centre, with a central V cut-out only. Note also the slight reduction in chord at the flap tips on the 2018 wings which may help decrease drag via a similar methodology to the spoon-shaped idea.

Finally, unlike in 2017, Ferrari has not decided to redesign its rear wing support pylons for the lower downforce wings, keeping the upper surface attachment.

This design is motivated by providing cleaner flow to the underside of the rear wing, which is the most critical part in terms of airflow separation, stall and significant loss in performance. Advantages of the underside attachment approach are less drag directly, as well as lower weight.

Aside from its low downforce rear wing, carried over from 2017, Red Bull’s main development focus was on a revised front wing for Baku – the new design is very resemblant of that with which the team finished the 2016 season.

To begin last year, the Milton Keynes outfit used a radical design, since copied by Renault, whereby the inboard flap tips did not curve downwards, as seen below, but actually had an upward orientation, together with a significant chord. 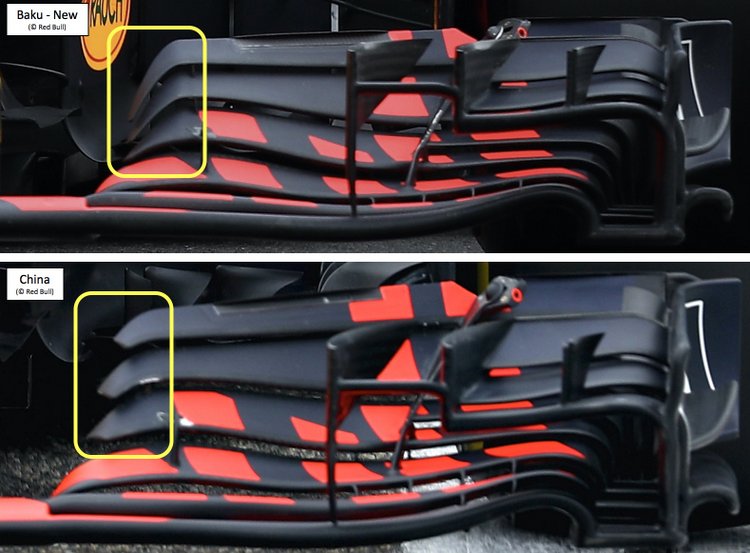 During last season’s Abu Dhabi practice sessions, the front wing with which Red Bull had competed thus far in 2018 was tested, featuring a compromise between its 2017-spec and conventional wisdom, that is a low flap tip positioning.

Another new wing was tried in the second pre-season test, with a revised mainplane, but this was quickly put to one side. It remains to be seen whether this will reappear in a modified form for the team’s major Barcelona upgrade.

While most teams do have their flaps drop down significantly and decrease their chord along the inboard sections, Red Bull’s design may be a specifically low downforce configuration. This would work by decreasing the strength of the flap vortices, while not altering the power of the main Y250 vortex, shed where the mainplane meets the FIA-mandated neutral section.

As a result, there would be lower induced drag, but potentially a penalty to pay in terms of underfloor performance, as the bargeboards would receive a different flow structure. Also of interest was the fact that the flaps’ angle of attack remained relatively high despite the nature of the track, again suggesting that this may have been part of a lower downforce package.

Toro Rosso has been unable to repeat its strong performance from the Bahrain GP in the last two races, despite being aided by some low downforce developments for Baku. At the front of the car, a simple change was made by removing the gurney tab from the front wing’s upper flap.

Although it would have resulted in a small straight-line speed gain, this would have been about balancing the front and rear of the car, something which is always a challenge at low downforce circuits.

Removing the gurney tab would have decreased front downforce, offsetting the loss at the rear from a lower drag rear wing, and giving the driver sufficient confidence to push to the limit of the car. Therefore, even though downforce is lost, the overall performance is increased.

Like Renault, Sauber took the unusual approach of introducing a significant general chassis performance upgrade at a low downforce circuit.

Generally, when arriving at such circuits, teams tend to focus purely on maximising their low downforce set-up, with evaluations of new parts potentially being clouded by the abnormal downforce levels. Nevertheless, the update clearly worked – the team scored a very strong sixth place finish. 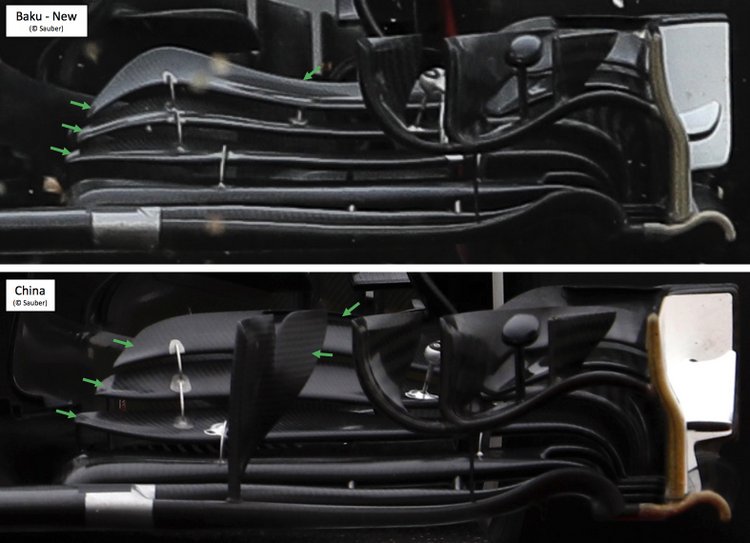 A new front wing was run throughout the weekend, with completely revised flaps being the main change. They now resemble the shape of those on the Ferrari and Haas cars, with a very low angle of attack central section (accentuated due to the nature of the circuit), together with a higher angled inboard section, in order to optimise the series of vortices produced here, and how they roll up with the main Y250 flow.

Note the differing position of the inboard flap tips – the upper two terminate further inboard than before, while all three are now lower down. Again, this will alter the array of vortices heading rearward, optimising the performance of the bargeboards in moving the front tyre wake outboard, for instance.

It would not be a surprise if the team altered its bargeboards for Barcelona, given the knock-on effect, as part of a wider development package.

Also, both the gurney flap and the most inboard vertical vane were omitted, with the latter most likely being a circuit-specific development to improve straight-line speed. The gurney may or may not reappear – neither Ferrari nor Haas use a gurney of this style so it is likely that if it does return, it will be of a different form. Modifications were also made to the wing’s endplate canard.

The width of the fin is now much smaller along its leading part, while the angle of attack is lower than previously. As a result, it is likely that the vortex shed along its side will be weaker than previously. This vortex is subsequently turned outboard by both the main endplate’s outwash and that of the mini-endplate, helping to pull air around the front tyre for improved rearward Aero performance. 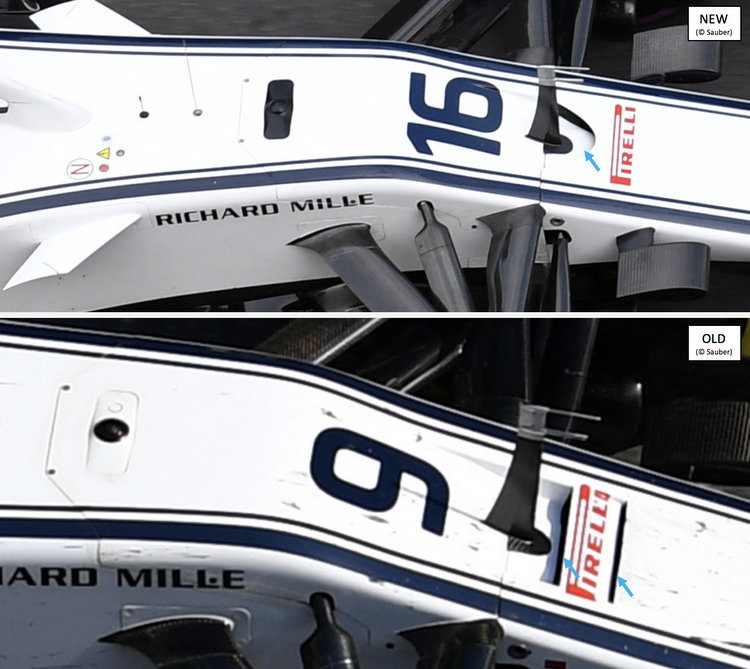 Weakening the vortex would perhaps improve the wing’s Aerodynamic efficiency if the resulting loss in downforce was outweighed by lower drag and improved straight-line speed. The second part of the chassis upgrade concerned revisions to the S-Duct outlet configuration. Previously, two outlets were used, but these have seemingly now been combined into one.

The S-Duct takes in air from under the nose, helping to tidy up the flow in this region by, for instance, removing some of the turbulence that results from the bluff body that is the nose thumb-tip. This flow is then ejected at the top of the nose, reducing boundary layer build up over the chassis vanity panel, to ensure that flow remains attached over the top of the chassis.

This is of particular importance for this year’s Sauber, since its nose-chassis transition is much starker than last year’s smoother design. The double outlet was perhaps aimed at attempting to energise a greater coverage of flow, whereas the new edition is more conventional in this regard.

Modifications were also made to the C37’s rear wing, with a new flap being introduced for Baku. It featured a shorter chord, together with a central V cut-out. The former would have reduced the loading of the wing’s central section relative to the high downforce version, thereby lowering the strength of the wingtip vortices for improved top speed. 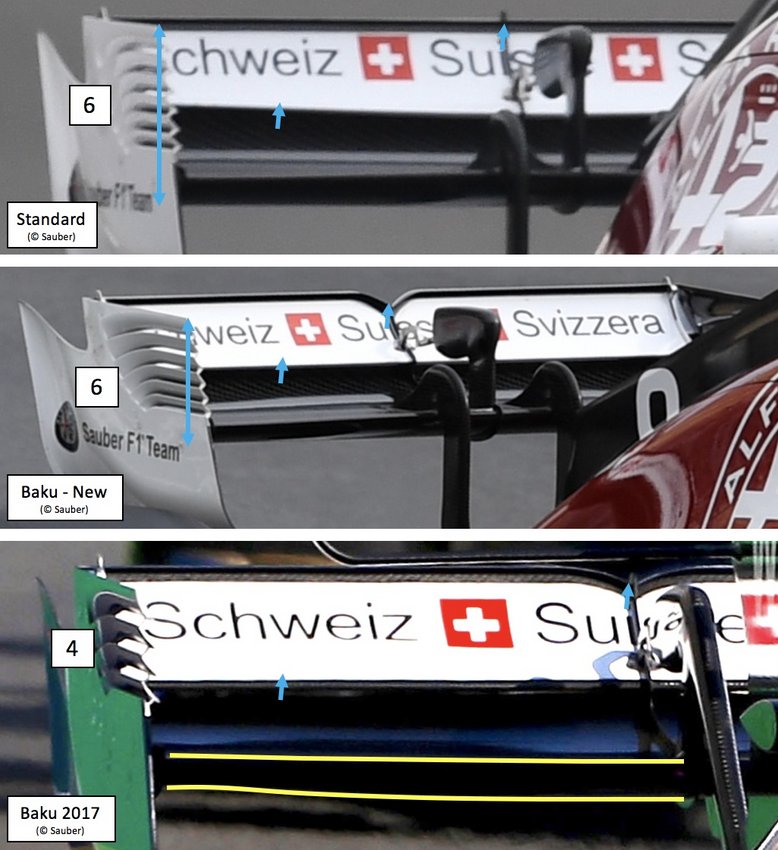 It is interesting to note, however, that the overall angle of attack of the wing was only reduced very slightly compared to the team’s maximum downforce wing, in stark contrast to most other teams, who ran with a significantly lower angle of attack.

Compared to the team’s 2017 Baku wing, the angle of attack was similar, but the six-, rather than four-louvred endplate was selected, while the flap’s V cut-out was greater for 2018 and the subtle spoon-shaping of the mainplane was absent.