Ricciardo and Verstappen collide in Baku 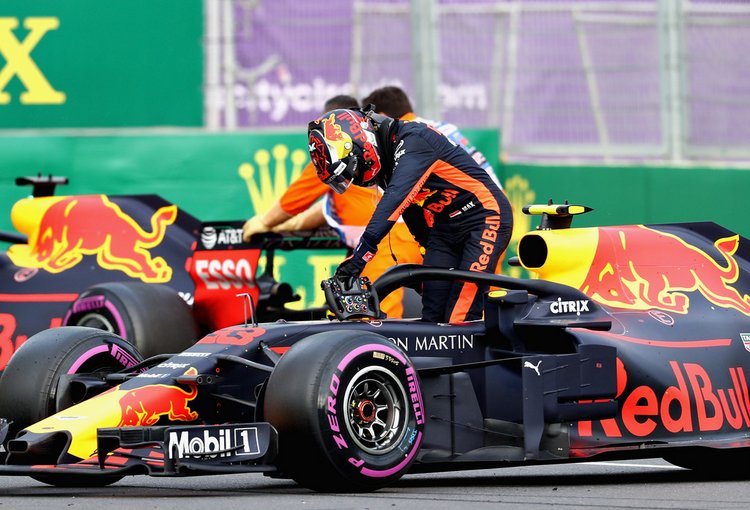 Red Bull drivers Max Verstappen and Daniel Ricciardo collided in Sunday’s Azerbaijan Grand Prix while running fourth and fifth, putting both out of the race.

Ricciardo, the race winner in China two weekends ago and in Baku last year, smashed into the back of his 20-year-old Dutch teammate’s car while attempting to overtake on the 40th of 51 laps.

The incident brought out the safety car for the second time in the race.

Both drivers were remarkably calm afterwards when reflecting on the incident that cost their team valuable points.

Verstappen refused to be drawn into the blame game and told reporters, “We don’t need to speak about who was at fault…”

“Disappointing for the team. We lost a lot of points unnecessarily. We don’t need to speak about who is at fault because we are representing a team.”

“The tow was very strong. We were pretty similar speed and always very close. Before that it was hard racing but very fair. What happened afterwards was not good. This has happened before, you learn from it and we have to make sure it doesn’t happen again. We will talk about it and see what happens.”

Asked if he and Daniel were okay after the collision, Verstappen replied, “Yes, of course. As racing drivers, you go for every inch. We are very fair to each other and spoke immediately afterwards.”

A contrite Ricciardo told reporters, “I’m pretty down. We’re thankful that we are allowed to race. Max and I love to race as we show and that’s cool.”

“We did get close a few times in the race already touching. Sometimes we were on the limit and unfortunately, it’s ended how it did. It’s not a nice situation. We both feel pretty bad that it ended like that and for the team, it’s pretty crappy.”

“The incident itself, it’s a tough one. Once I come out, I thought the gap was opening up on the inside and once I was there I had to commit to that. I’m heartbroken for how everyone is feeling in the team right now.”

“We’re not into each other right now, it’s more just about saying sorry to the team and just apologise the best way we can. We don’t want to be in that sort of situation,” added the Australian.