Raikkonen: I played the long game and it paid off 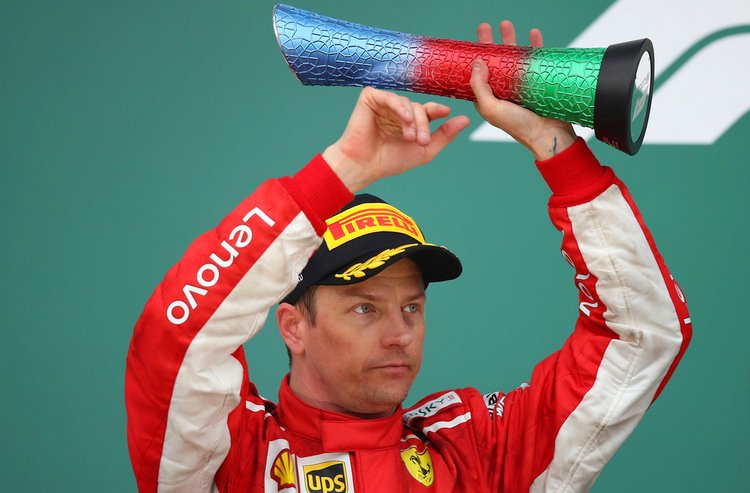 Kimi Raikkonen was in the wars during an incident-packed Azerbaijan Grand Prix in which he survived a collision and ran as low down as 12th early on in the race but he persevered to finish second on the day.

The Ferrari driver spoke of his ‘day at the office’ in Baku:

Tough start to that grand prix, you came together with Ocon. The Clerk of the Course thought it was a race incident. I guess you have a different point of view?
Kimi Raikkonen: Yeah, well, obviously I was inside and I think he probably didn’t see me. It’s pretty difficult sometimes to see. So obviously he just turned in and I was there. It wasn’t ideal the start for me but I didn’t get worse off from that, so I was lucky in that way. A difficult race after that. I tried to come back and at certain moments I felt good but I struggled a bit with the tyres, to keep them warm enough. I just tried to play the long game and to stay there, expecting issues. It paid off, but it wasn’t easy.

Is there a sense of frustration building inside you now, of what do you have to do to win a grand prix?
KR: No, not really, yesterday I can only look in the mirror and the reason is easy to know. Yeah, it was frustrating, as I said earlier, I was taking it easy into the corner and I still managed to throw it away, so that is more painful that just if you happen to know that you have to try something to be fast enough – but that wasn’t the case. Yeah, pretty eventful race today. Got a destroyed front wing and tyre in the first few corners. I had a good feeling sometimes but was struggling to switch the tyres on. It was kind of on and off. I had a great many close moments. Even on the way to the grid I was pretty certain that it’s in the wall already but I managed to get it away from it. Too many close calls. The feeling was there but not consistently. I thought, OK, I just try to go as fast as I can and a little bit safer and the Red Bulls, looking at what they were doing earlier in the race it was pretty certain something will happen later on when they get close to each other. Everything changed after that and once put the other tyres on and again it felt OK and it all played into our hands. Very definitely a better day than yesterday but it still… second is not what you want but looking where we were earlier, you take it and we go from there. We know we have the speed. We just have to put things together, and I’m sure it will come.

You’ve had a lot of bad luck in the races this season. You’ve had some big results go amiss through no fault of your own. Do you feel that you got a bit of that luck back today and how important is this for you to really kick on for the rest of the season?
KR: Well, I wouldn’t say that I have had a lot of luck over the years, but I don’t count on luck. You cannot count on that. I think you get what you deserve in a way and sometimes you are a bit luckier than other times but if I take over the years, I’m far from on the positive side yet. Maybe today certain things worked in our direction but then whatever happened in front of us are self-made issues in many ways. Stay out of trouble in this kind of race and definitely knowing what happened last year, it’s going to pay off. I’m more happy that I have the speed – I know that I have the speed. We just didn’t do it: the mistake yesterday and some issues earlier. That’s the main thing, that we have the speed. We just need to put it together and I’m sure that we can do even better.

Checo hit you on the first lap, then you had the incident with Ocon. Was your car damaged for the rest of the race? Did you feel there was something lacking there?
KR: Honestly, I don’t know. Obviously we destroyed the front wing and right tyre but then they changed the front wing so I didn’t check the car at all. Then also, I think on the first lap, after the restart, on the little kink, coming on the last part of the straight, I hit the inside wall at full speed so I’m pretty lucky that the front wheel didn’t go. I was expecting to go quite fast but I was lucky. It felt OK, the car, honestly. I struggled a bit with the tyres sometimes but apart from that I’m sure there wasn’t big damage.