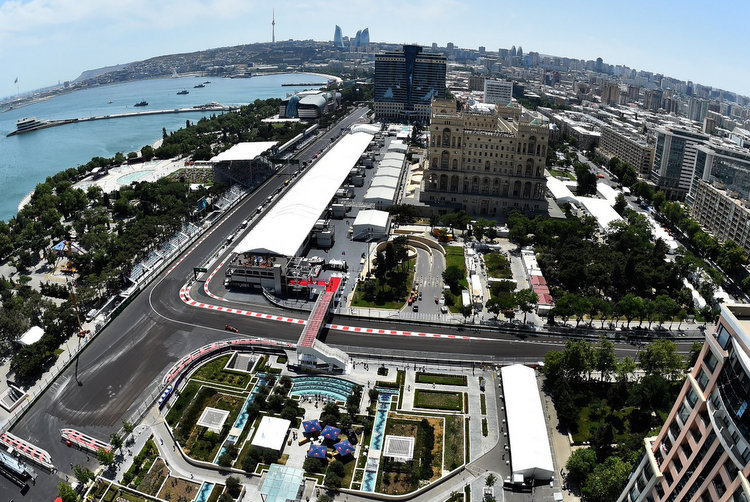 The first Grand Prix of Azerbaijan was hosted at the Baku City Circuit in 2016, the city track, located in the country’s capital, is 6 km long and was designed by architect Hermann Tilke.

The Baku City Circuit raised the game of Formula 1 tracks when it debuted in 2016. It is a 6.003-kilometer (3.730-mile), 20-turn street course which drivers describe as “a mixture of Monza and Monaco.”

Cars blast down two enormously long straights in a dumbbell-shaped layout that runs counterclockwise. The two main straights include a 2.2-kilometer (1.367-mile) stretch along the promenade and a one-kilometre (.621-mile) stretch that takes drivers away from Azadliq Square.

The Herman Tilke-designed track blends old and new amid these fast straights and slow corners. It winds through a modern, Eastern side where swank hotels and high-end shops reside, to a historic area where the streets are narrow and steep before returning to the main straight.

A sharp left turn greets drivers at the end of that straight, not too dissimilarly from the Tilke-designed Circuit of the Americas in Austin, Texas, home to the United States Grand Prix. It’s a unique and challenging layout that is augmented by Baku’s notorious winds, which are always prevalent. In fact, City of Winds is the unofficial, but literary, name for Baku. (Source: Haas F1 Team)

Hamilton has 119 career podiums and is second on the all-time list behind Schumacher (155). Vettel has 101, Kimi Raikkonen 93.