Grosjean: No reason why I can’t be F1 world champion one day 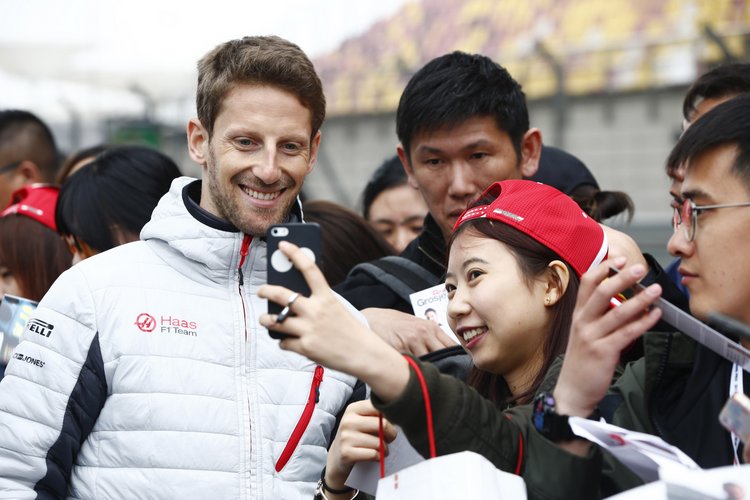 Romain Grosjean has endured a rollercoaster ride in Formula 1, once the bad boy of the sport he has cleaned up his act, he is now a respected driver on the grid with Haas and the team’s strong car this season has triggered Formula 1 world title dreams.

The once “first lap nutcase” has matured and now is one of the elder statesmen in F1 and a director of the Grand Prix Drivers Association (GPDA).

The 32-year-old Frenchman made his debut at the 2009 European Grand Prix for Renault, but in retrospect it was too much too soon – he was axed after seven races.

Thereafter he spent two years in the wilderness, competing in GT racing, Auto GP and GP2 where he was champion in 2011. Nevertheless, he did enough to convince Lotus to sign him up, to partner Kimi Raikkonen, in 2012.

But his return was marred by overly aggressive driving. That year he triggered the huge pile-up at the start of the Belgian Grand Prix and was banned for one race.

Since then he has matured considerably and in 2016 he was hired to spearhead Haas’ entry into the sport. This year he has at his disposal the best car the American team have produced and thus he is relishing the prospects of the season ahead.

Speaking to ESPN, Grosjean revealed, “You need to have one of the two best cars to win a race, I know that, but I believe if you give me that car I can win. There’s still no reason why I can’t be world champion one day.”

“I have had two grands prix where I should have won the race but luck never turned my way. In Germany, 2013 the race was won clearly and then a Marussia blew the engine, parked on the side and the car rolled backwards onto the track. There was a Safety Car and Vettel won. Then there was Valencia, 2012 where I could have won the race and the alternator failed.”

“When I came into Formula 1 I thought it was just about going fast. Formula 1 is much more complicated than the other categories. Yes, it’s about going fast but it’s also about developing the car, finding the right setup and getting everything else right. The youngsters coming in are super-fast but they have never been in a situation where they need to develop a car.”

“In Formula 1 there’s very little time to get better. It’s not like tennis where you can go and play every day to get your backhand perfect. The more experience you’ve got in Formula 1 the better you get.”

After years as a Renault backed driver, Grosjean explained his decision to move to Haas, “When I joined I saw the idea and the partnership with Ferrari, the suspension, the gearbox, the engine, the hydraulics from Ferrari.”

“I thought okay if we’ve got those – which are probably the best in the world – we need to focus on doing our own chassis and own aerodynamics. I met some of the aerodynamic people and they had a good understanding of what the drivers want and need.”

“I knew there were times where we [wouldn’t] get the best of it but I also knew there would be times where it could be amazing. It was a great challenge and a great unknown but what Haas has achieved in two and a half years is unbelievable and it’s never before been seen in Formula One. Our rate of improvement is huge.”

“Those teams have got huge resources and five or six hundred employees and we’re there fighting with them and making our way through. Already that’s an accomplishment on its own and if we can keep up the rate of development and keep up the performance with those guys it would be pretty impressive.”

Haas surprised all during their debut season in the top flight, but last year the honeymoon ended as the stark reality of what it takes to be competitive at the highest level dawned on them. But they persevered, this year in the Haas VF18 they have a strong car – perhaps even the best of the rest behind the big three.

Grosjean said of his team after three races in 2018, “The team atmosphere is amazing, the cars are fast and we’re fighting at the front. Obviously, we would like to fight for the win a bit more but I’m enjoying my time.”

In Australia, Grosjean and teammate Kevin Magnussen were running comfortably in fourth and fifth, looking good for the team’s best result to date, but a series of botched pitstops destroyed their afternoon Down Under.

Grosjean recalled, “Everyone was sad that we lost a huge result for the team but my philosophy was like: I would rather retire when I’m fourth or fifth in the race than finishing every single race in 18th position – that’s boring like f*ck.”

“Look, we had fun, we fought the Red Bull, we’re fighting at the front. It’s a shame, but if the car is that good and we can repeat that every weekend then Australia is going to be forgotten.”

“This year the car is very fast, I believe we have a very good baseline, a very good package and we can do very well,” added Grosjean ahead of the Azerbaijan Grand Prix where he will be making his 126th grand prix start.