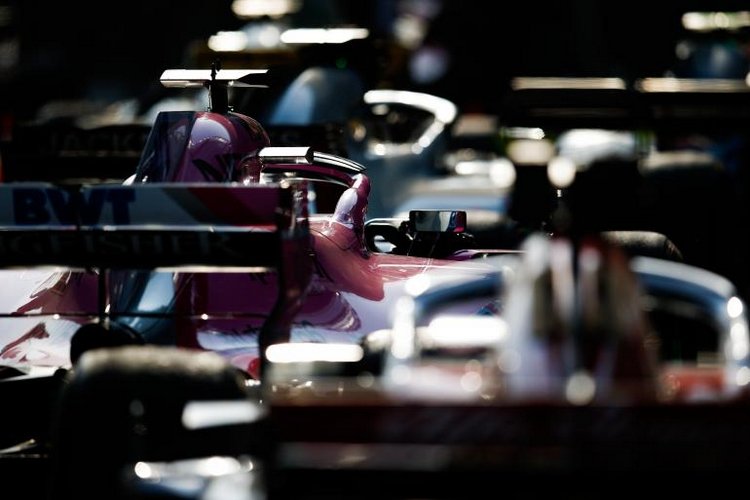 We talk tech in the wake of the season’s first back-to-back races in Bahrain and China which saw several teams try tweaks to their existing packages as they attempt to eke out more performance in what is Formula 1’s version of the arms race that is set to run throughout the season.

In comparison to the past four years, Mercedes has had a difficult start to the season. Despite this, it still leads the constructors’ championship and has both drivers in contention for the title. In the first three races, it has focused on optimising its current package, such as by using different front wing designs to maximise tyre life and to tweak the balance.

Both in Australia and Bahrain, Mercedes began the weekend with the v1 design (used throughout testing), before migrating to the v2 edition for competitive sessions. The v2 wing has a greater upper flap chord which will produce a little more downforce, reducing understeer.

This does not help to protect the rear tyres, so it was surprising that in the Bahrain race Mercedes was able to keep its rubber in better shape towards the end of the first stint than Ferrari. 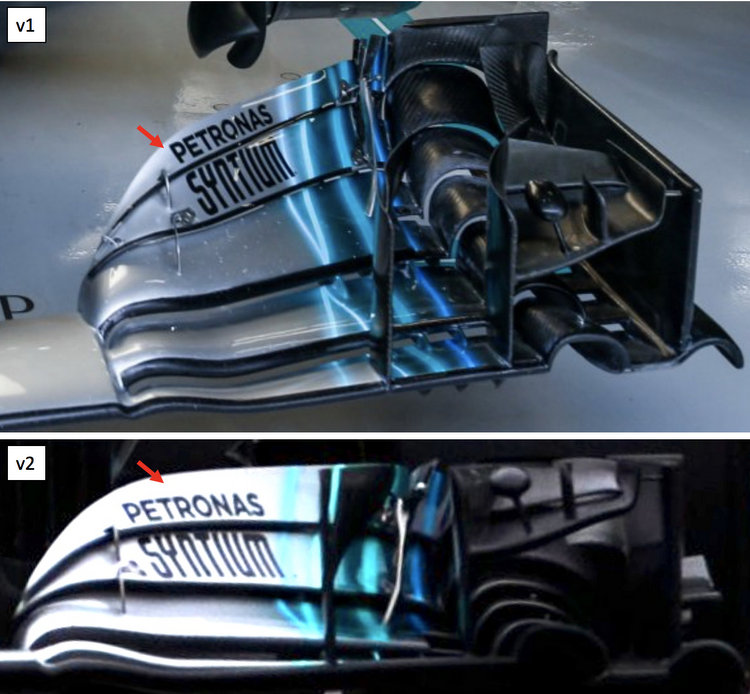 For China, the v2 design was run throughout, which was to be expected given the circuit’s front-tyre limited characteristics; more front downforce reduces sliding of the front tyres, extending their life. It can, however, create some problems with traction zones, with this being especially costly before a long straight.

McLaren has endured a difficult start to the season, with the chassis performing poorly, especially in qualifying. There is no gross handling characteristic, but a lack of downforce and Aerodynamic efficiency, with the latter evident in the speed traps.

The team ran its highest downforce rear wing in Bahrain, which neither Red Bull nor Renault, both using the same power unit, decided to do. In addition, the most aggressive front wing was selected.

While running more downforce is better for the tyres, and allowed a charge into the points on race day, on circuits where overtaking is more difficult problems can result in poor track position. The team will hope to solve this issue with a delayed major upgrade package scheduled for the Spanish GP, which the team had suggested will provide a true measure of its potential for the remainder of this season. 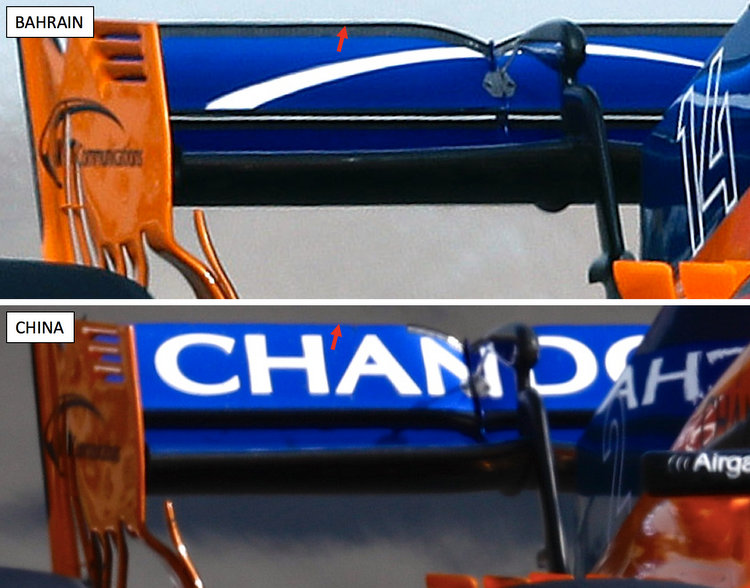 Having admitted that it ran too much wing in Bahrain, McLaren made a rudimentary change for China, removing the majority of the gurney flap on the rear wing, with only the central section remaining.

This will, of course, reduce the downforce of the wing, but with the pressure differential either side of it being lower, the wingtip vortices will be weaker. Despite this, straight-line speed remained a weakness in Shanghai, suggesting Baku, made up of slow corners (also a negative for the MCL33) and long straights, could be a major struggle.

Renault has had a relatively strong start to the season in terms of results, with the team so far keeping pace with McLaren. However, the gap to the front-runners has not closed from the end of last year, and excessive tyre degradation, which plagued the car for the first half of 2017, has resurfaced.

Over the last two races, three different front wing designs have been employed. Firstly, looking at Bahrain, Hülkenberg and Sainz used different set-ups, with the former deciding on a shorter chord upper flap design, the result of which would have been lower front downforce and improved straight-line speed. 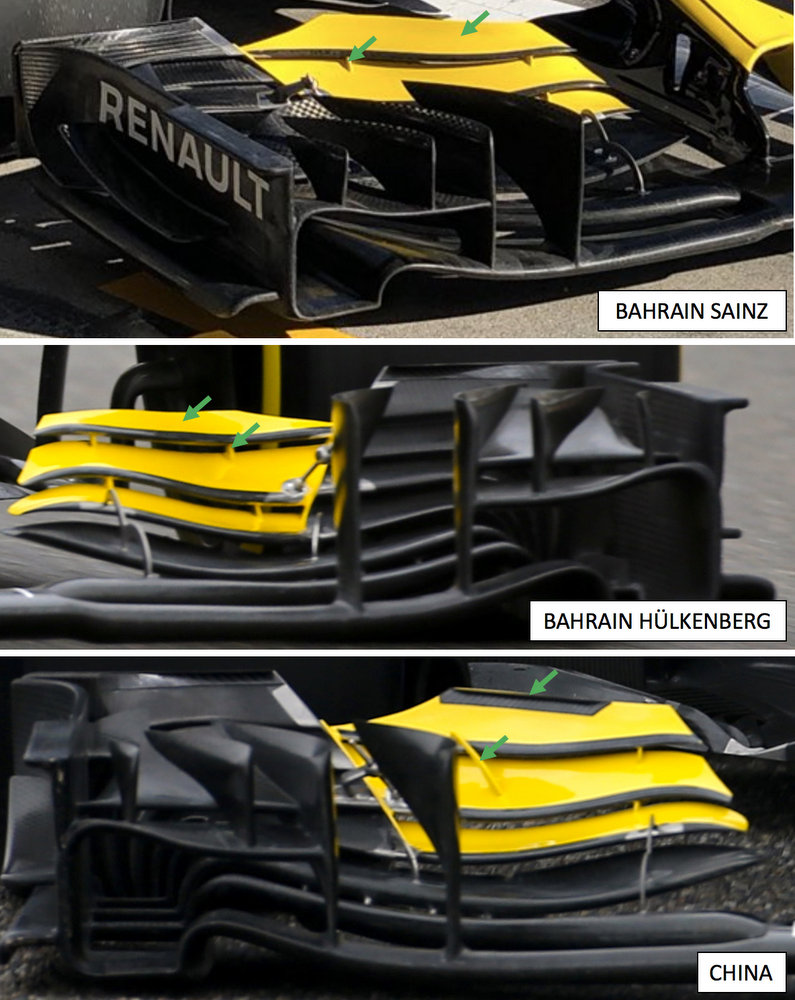 Hülkenberg is an aggressive driver on the rear tyres, and this measure would have helped to keep rear degradation under control, allowing a strong sixth place finish. For China, a new design was introduced, with the minor development concerning the addition of a gurney flap to the rear of the wing. As mentioned above with Mercedes, the Shanghai track is very aggressive on the front tyres, so this design would have helped ease the stress on them.

Also note that the uppermost slot gap separator, used to prevent relative deformation between the upper two flaps for optimal performance at all speeds, was made larger and overlapping. There are a couple of potential reasons for this – firstly, the gurney on the flap would have increased the downwards force on the upper flap, making it more prone to deflection, while secondly, the team may have noticed some disruption to flow on the underside of the wing from the old separator, potentially causing flow separation problems.

Toro Rosso enjoyed a strong showing in Bahrain before a much more difficult weekend in China. Its overall performance has been aided by a medium-sized upgrade package, with the most visual change concerning the second element of the bargeboards. This part now features four more vertical slots, much like those on the Sauber. 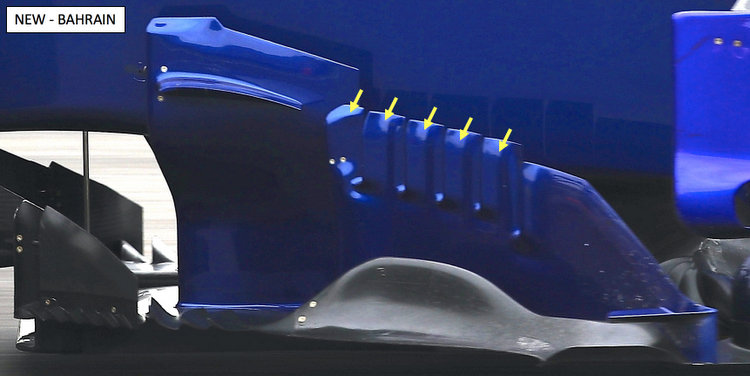 The result of this will be the production of six weaker, but more targeted, vortices, as opposed to two stronger rotating, flows previously. Each of the new vortices shed at the top of the four most forward mini vertical elements, will be used to either attack the front tyre wake and/or improve flow around the sidepods to the back of the car. They will head towards differing lateral positions, improving the bargeboard’s coverage.

The performance of Haas in China was weaker than in Bahrain, which could have been a result of the cooler track temperatures or different circuit layout. Nevertheless, points were scored in both races and the team appears much stronger than at the same point last year.

For the second race, Haas ran an asymmetric cooling set-up, with the right outlet being much smaller than the left one when looking from behind. This has become a feature of midfield cars over the last two seasons and is motivated by having more temperature critical components in one sidepod compared to the other. Making one outlet smaller than the other saves weight and results in a minor reduction in skin friction drag.

Interestingly, the drivers ran with different rear wing designs in China, with Grosjean opting for the lower angle of attack, reduced downforce/drag design. The Frenchman’s driving style is more suited to an oversteering car, whereas, Magnussen prefers a little understeer – indeed, this has been suggested as being the primary reason for the intra-team performance swing towards the Dane. 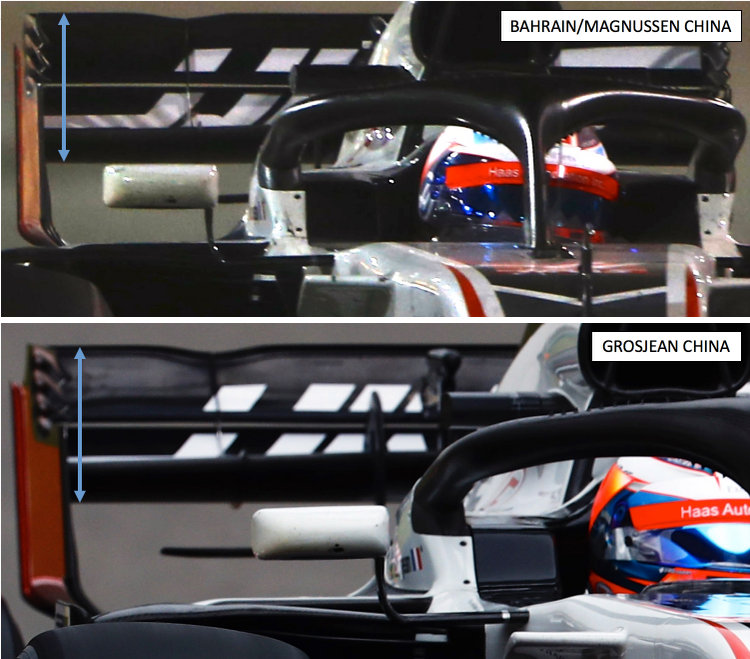 Therefore, with Grosjean taking off some rear load, he would be able to move an inherently understeering car towards his comfort zone, while also improving speed on the straights. It is generally unusual for such a difference to be visible within a team – the front wing is usually used as a balance adjustment device owing to the array of flap angles it provides. Red Bull ran with a similar set-up to Haas last year, more often than not as a gamble to overcome its straight-line speed deficit.